Well, that didn't go as planned. Kendrick and I gave a go at the Nolans 14 line on Thursday into Friday but bailed after Missouri. We were doing fairly well, although we slowed significantly between 13,000'-14,000' after the first couple summits. However, with no aid between Winfield (before Huron) and Avalanche (after Yale), we just didn't feel comfortable trying to make the push with the amount of food we had and going through another night. So, in the end, we bailed after covering about 60 miles and 21,000' or so. I learned a ton, made several mistakes, and am really excited to give the line another go over Labor Day with the big group. On a side note, Jason Koop and the Gosneys are giving it a go right now, and they are doing really well. I really hope they can make the push all the way!

We started at Fish Hatchery at 5pm. Originally, this was so that the drops off Huron and Oxford would be in the light, but upon reflection I think it is better to start in the morning and do these drops at night. We had already been up for 12 hours before we started, and going into the first night and next day with a 12 hour sleep deprivation was not the smartest plan. It didn't really impact us too much, but I do think it played into our overall fatigue.

We nailed the line pretty well from Fish Hatchery through Highline and then up the east ridge of Massive, with little route error. At the top of Massive the wind was howling and we quickly put on some layers and made a bee-line for the Southwest Slopes route. We gently trotted down this, passing by a family of goats before descending down into the dark of night in the valley. Crossing over Halfmoon Creek and climbing again to the backside of Elbert was no problem, and we found the right cairn and ridge going up Elbert. It seems that everyone goes too far here, and continues on the road until they reach the wash out from one of the gulleys coming off of Elbert. If you encounter the washout gully on the road, you have gone too far. The ridge you want is the one to the left (if looking up at Elbert) of this gully, and you get on it by aiming for the gully to the left (north) of the ridge, then climbing onto the ridge via a grassy northern slope. If you look close at the Koop track, they went one ridge too far. From here, dropping south and then going around Bull Hill and finding the Golden Fleece Mine was not a problem, but we did take our time since neither one of us had done this drop. We hit it just fine, and made our way down Echo Canyon to the road. From there, we went up the road to meet Tara (our only crew) at the La Plata trailhead.

We were in good spirits, and took off up La Plata at a nice clip. The moon had gone below the horizon, so this climb was pitch black, with just the massive starry sky above us. Finally we reached the summit and then went down the southwest route to reach Winfield. This was a fun drop, although muddy in the willows, as well as a bit slick on some of the sandy/dirt/talus sections.

At Winfield we had to change plans. We were unsure about getting any aid at North Cottonwood Creek (between Columbia and Yale), and so made the decision to push all the way to Avalanche past Yale until our next aid. This was sadly our downfall, as we had to load up with new packs and try and carry enough food for a solid 24 hour push over 7 summits with no aid. Ideally one has aid at either Pine Creek (between Oxford and Harvard) and then again at N. Cottonwood, but we did not know about the road going up N. Cottonwood since it was being worked on. We set off in good spirits, but with 30lb packs on now, we slowed down a bunch as the packs were so heavy. From the top of Huron, we made the drop off the east side and nailed the descent down to Clohesy Lake, hitting it perfectly and going around on the south side directly to the trail ascending Missouri's west ridge. Again, this seems to throw people off, as many descend one basin over (north) and then have to come back up the road a bit to get to the trail. Not a big deal, but in something like Nolans, I would assume every bit helps.

However, this is where we ended our journey. From Missouri, we assessed our food situation and calculated that we didn't have enough to make it all the way past Yale, and so we made the call to Tara and bailed down Missouri Gulch. It was disappointing to not complete the line, but I'm happy with how it went. The enormity of this line only becomes apparent when you give it a go. Running the peaks individually, or even stringing together a couple will not prepare you for how big this line is. It requires excellent endurance, route finding, aid, and crew to have a successful attempt. We had the first couple, but with such a long stretch with no aid or crew, it seemed foolhardy and dangerous to keep going.

I learned a ton on this attempt, and believe I will be that much better prepared come Labor Day to give it another go. I'm super thankful for my wife Tara who crewed for us at La Plata and Winfield, and for Kendrick for sharing some solid miles in the mountains. Our spirits were high the whole time, our energy was good, and we felt confident in our decisions and capabilities. All attributes one wants on such an endeavor. Now to just put together the other aspects that will make the next attempt successful. My respect goes out to those who have completed this route (eight people?), as well as to those who have tried. This line is amazing, but also insane, and to even attempt it garners some respect in my book. To finish it, well, WOW. 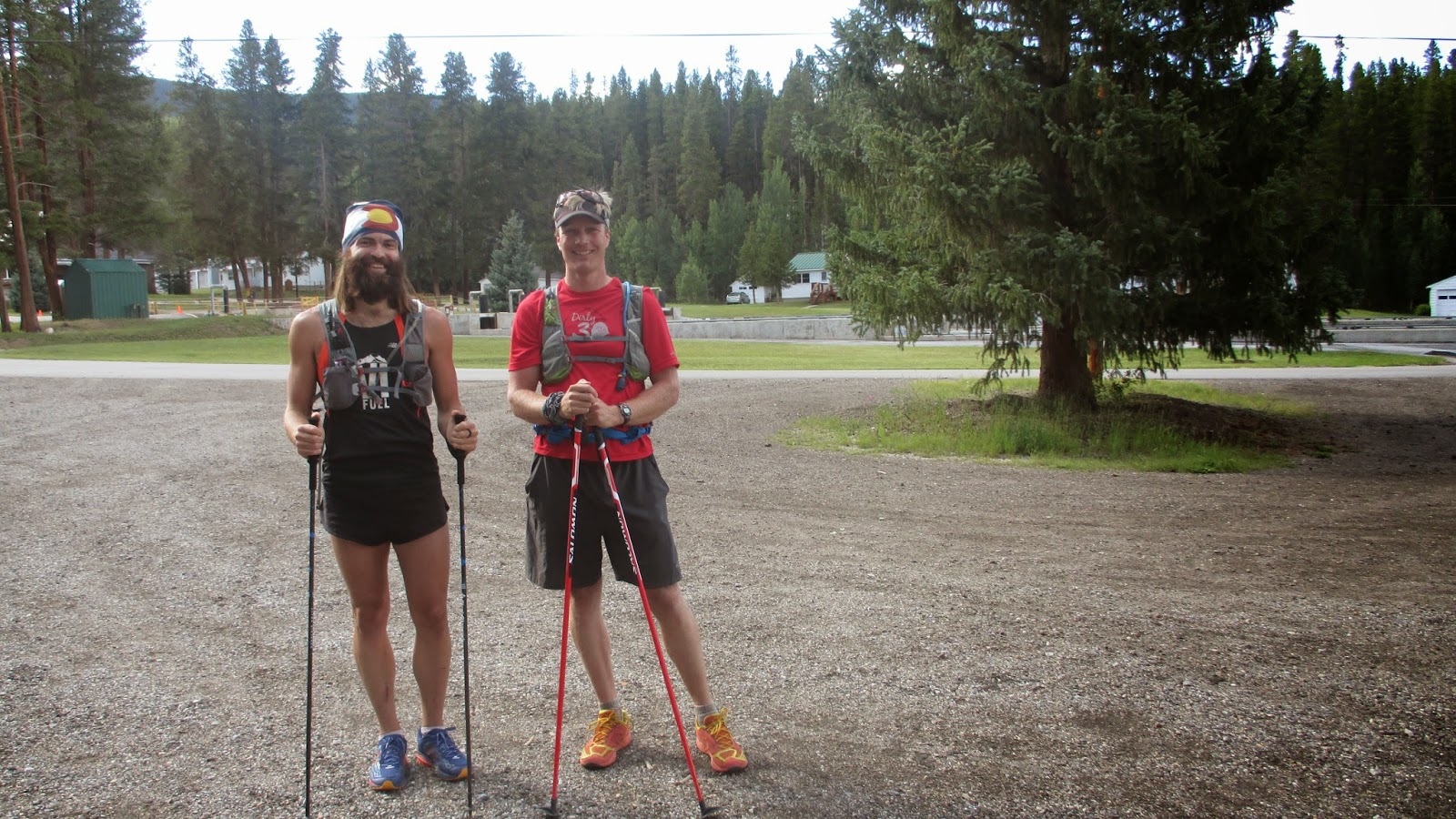 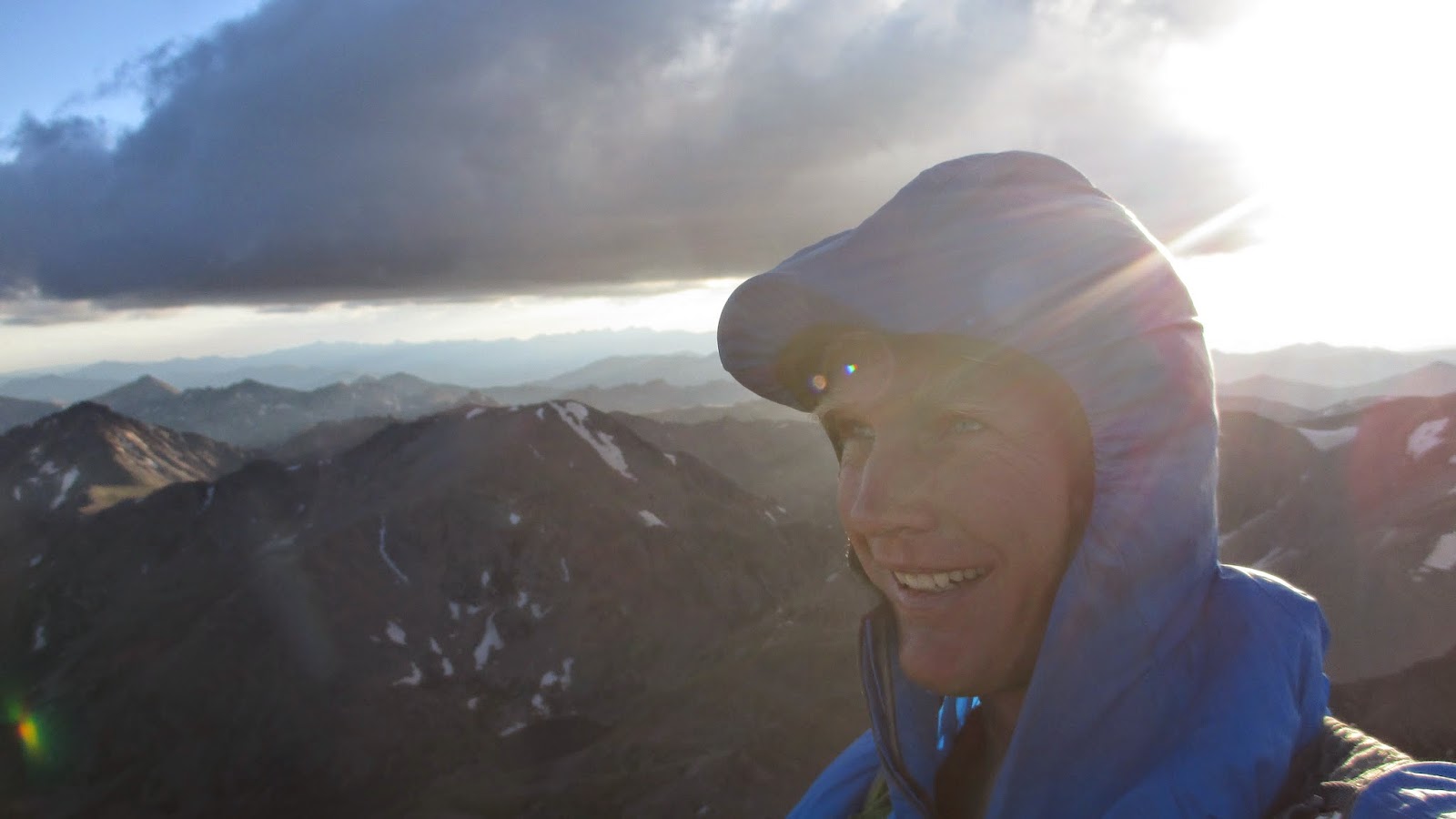 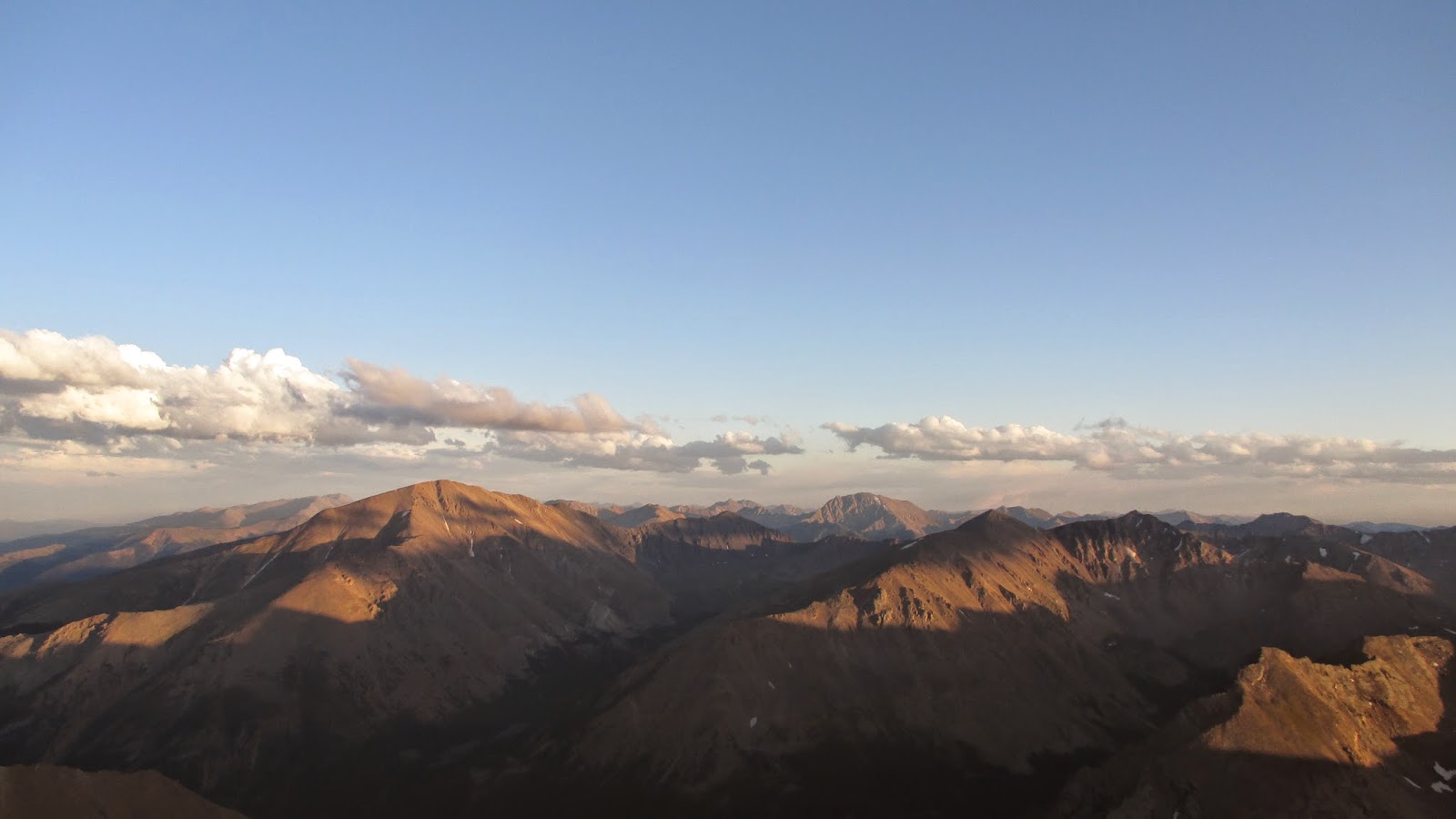 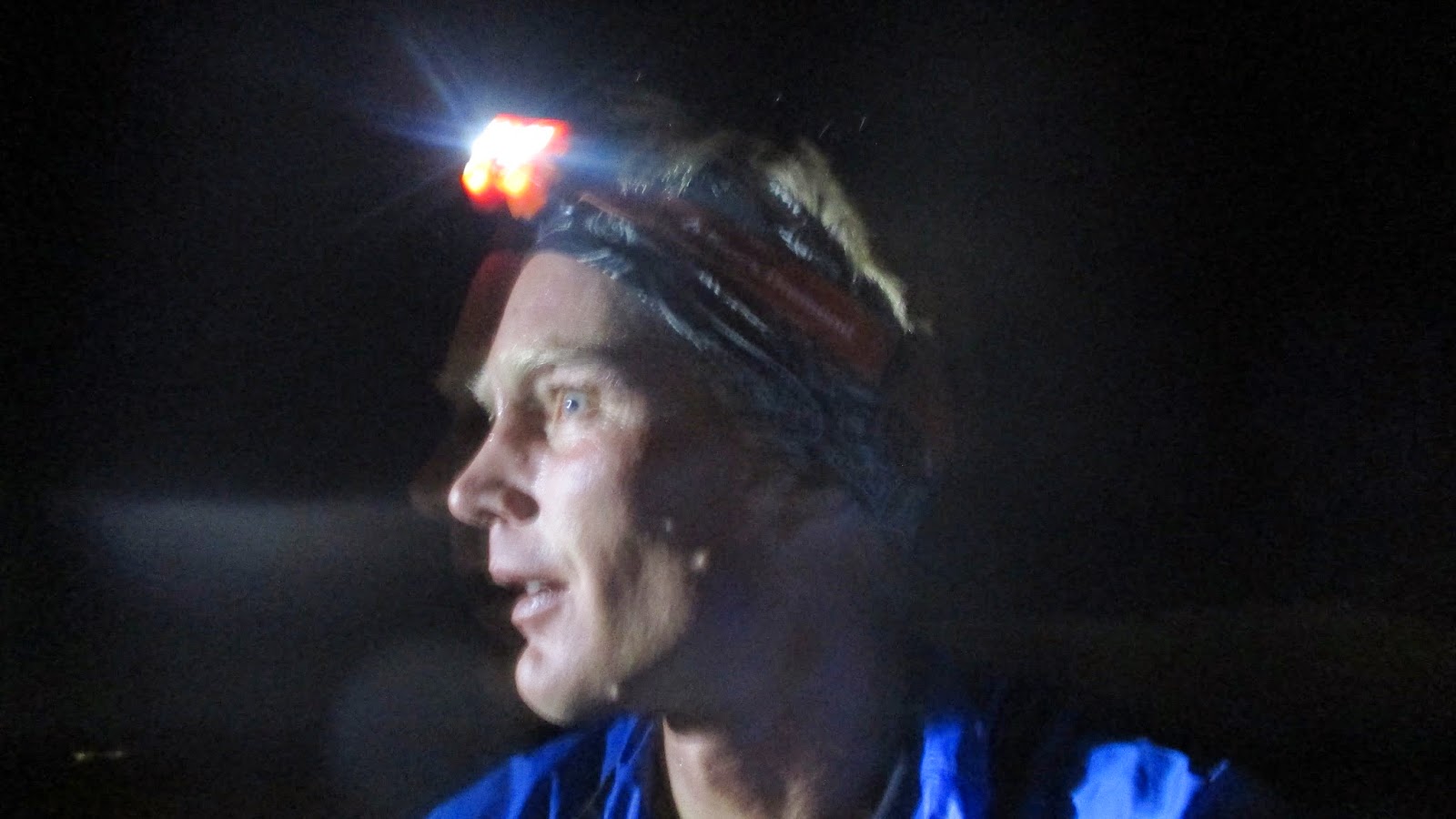 On the summit of Elbert. 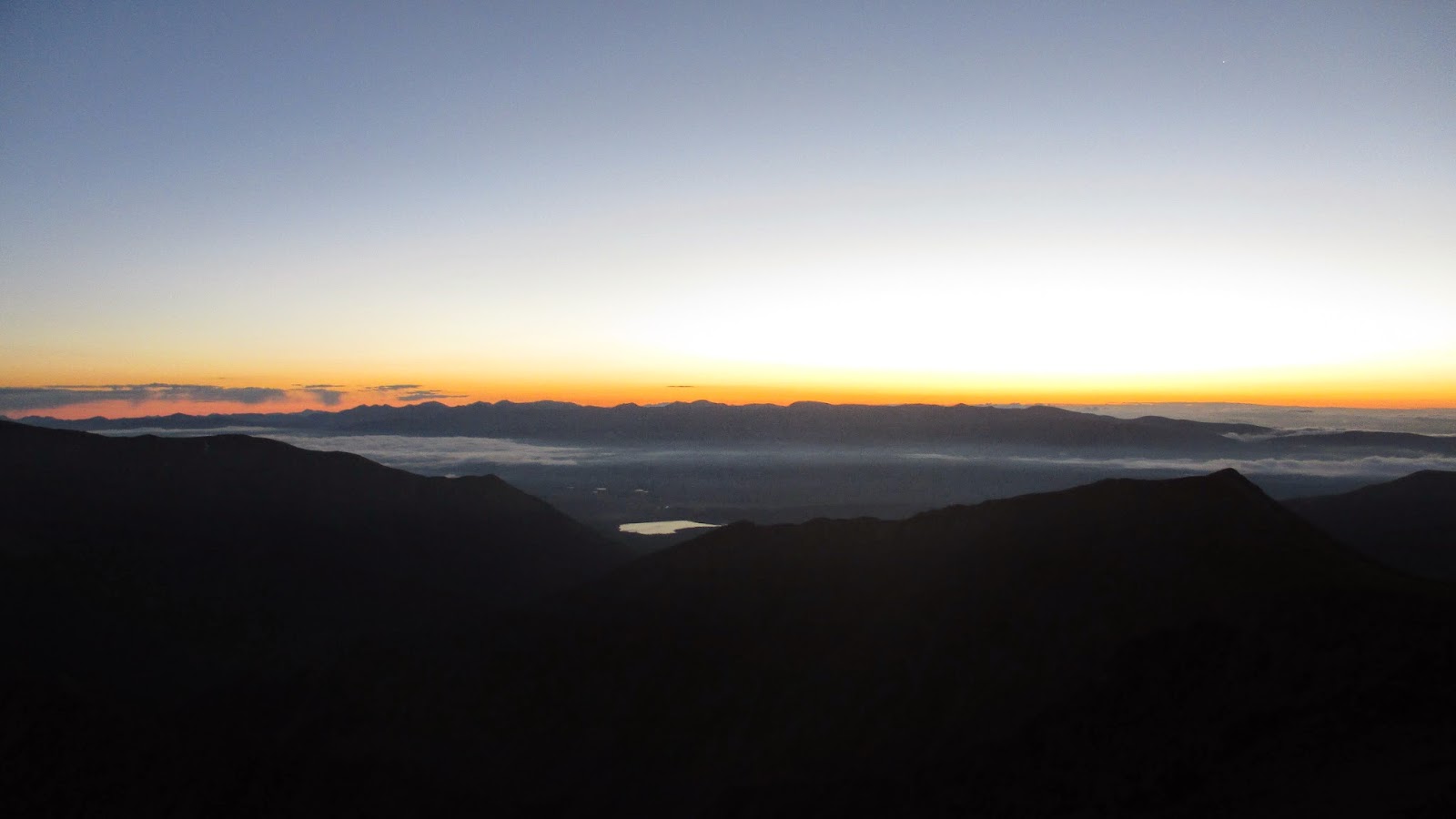 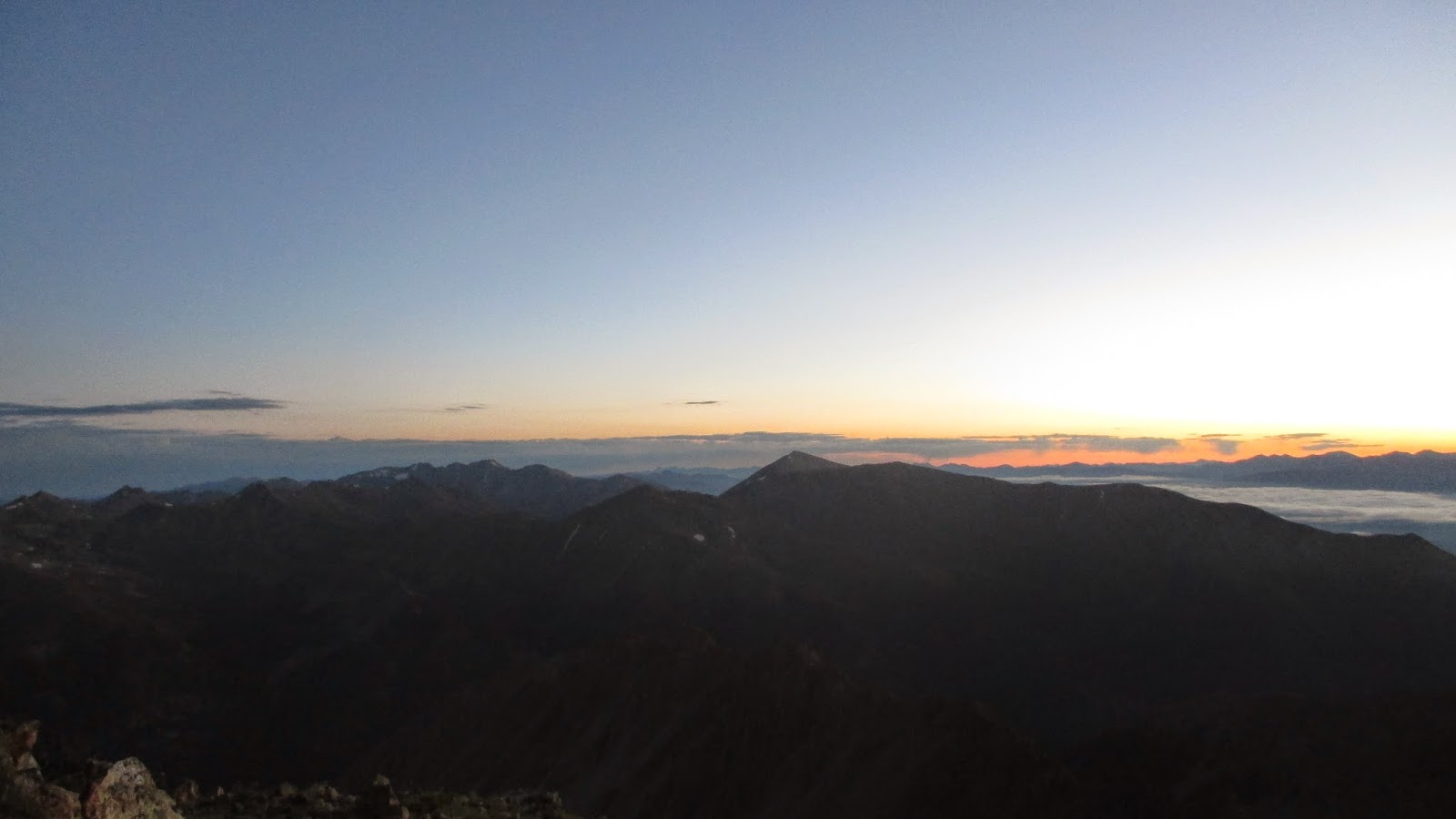 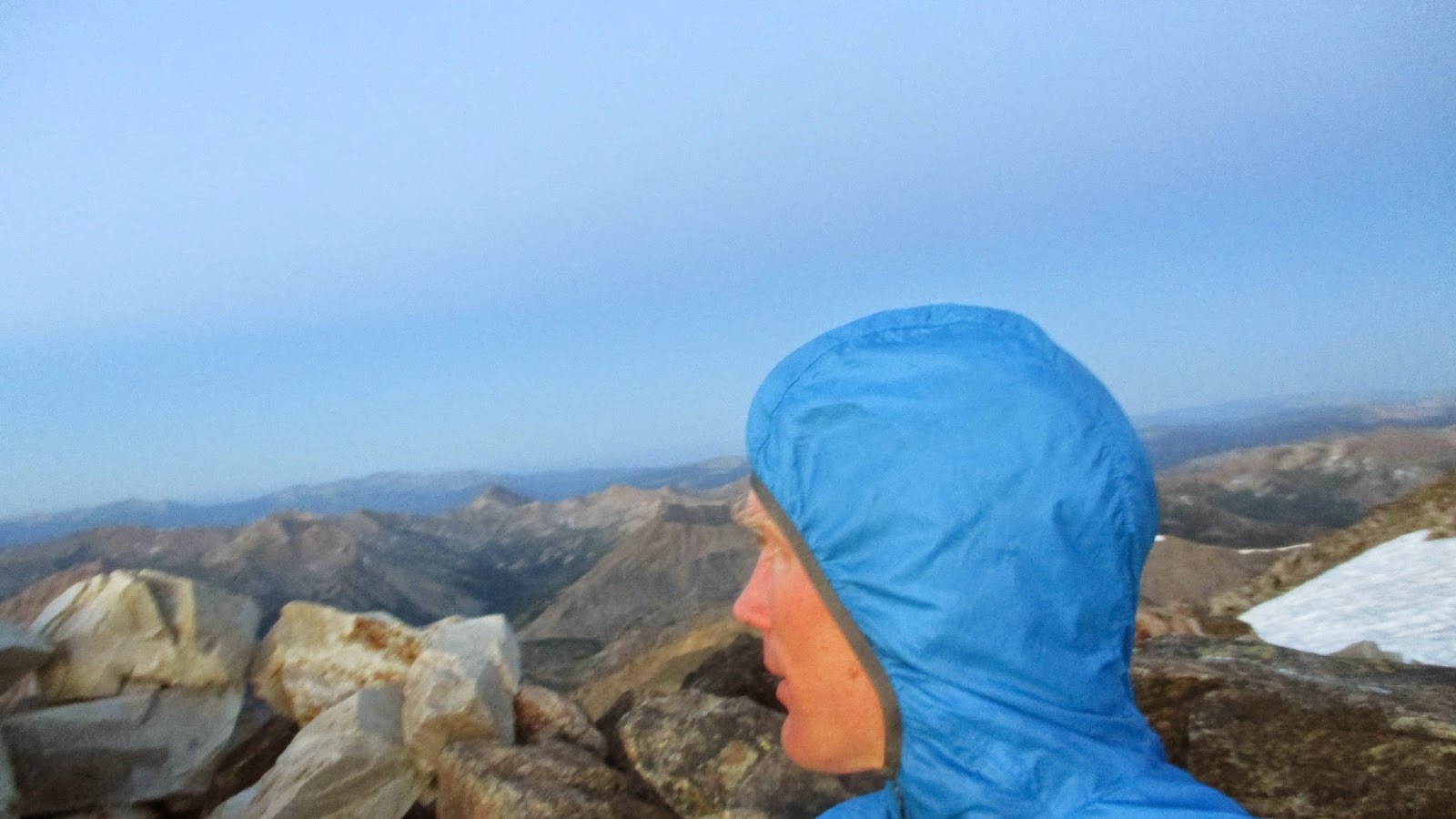 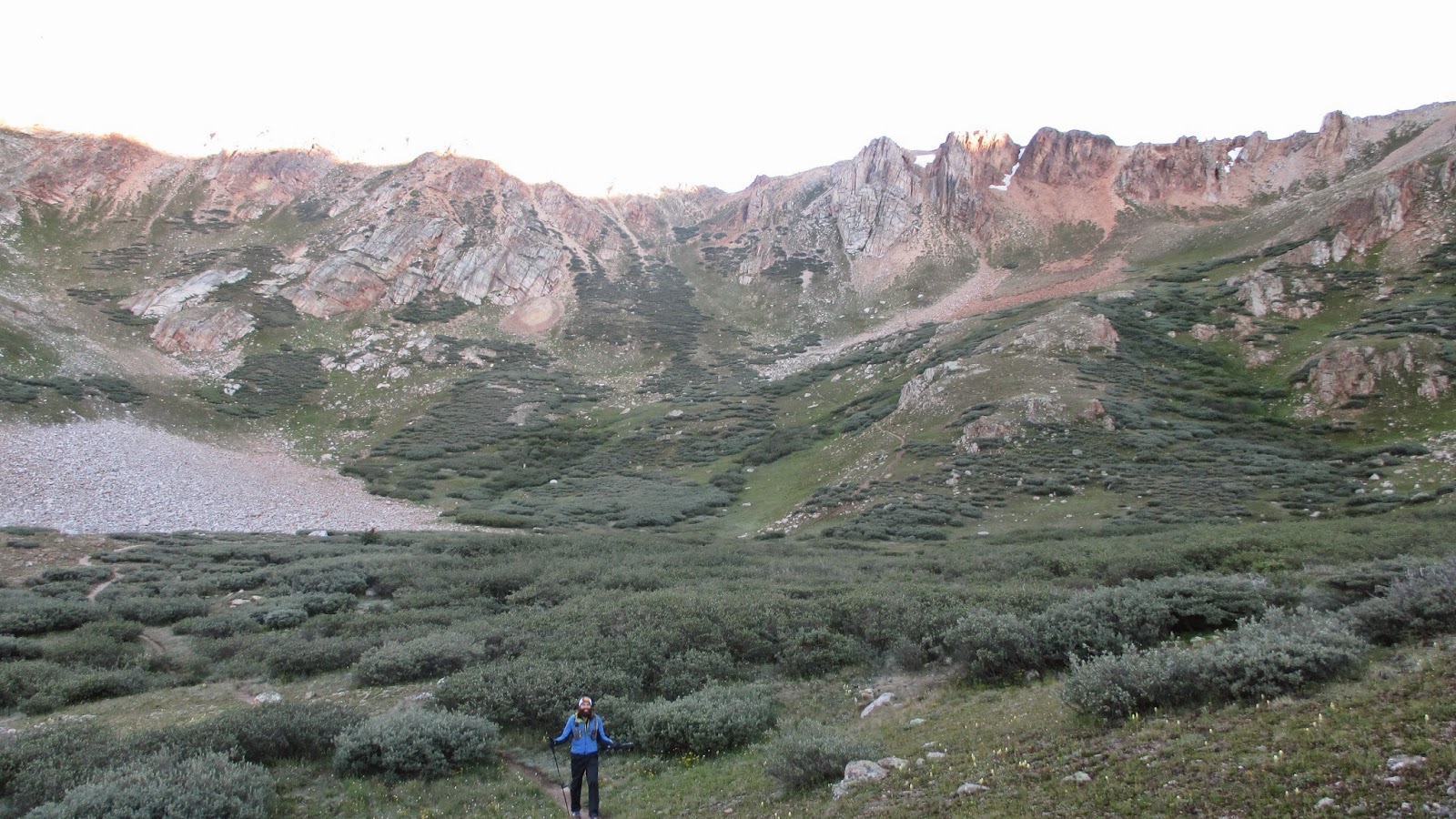 Between La Plata and Winfield. 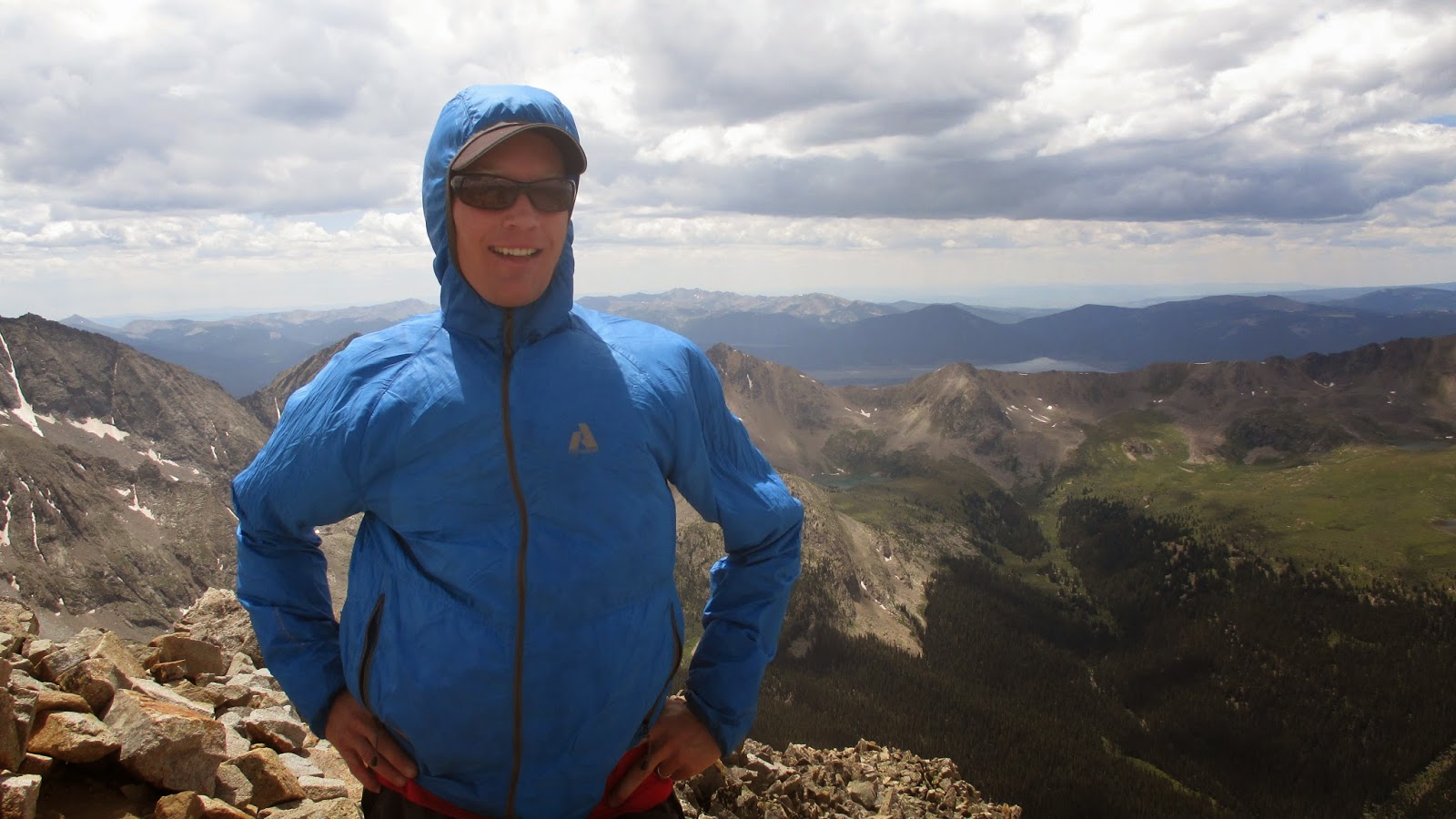 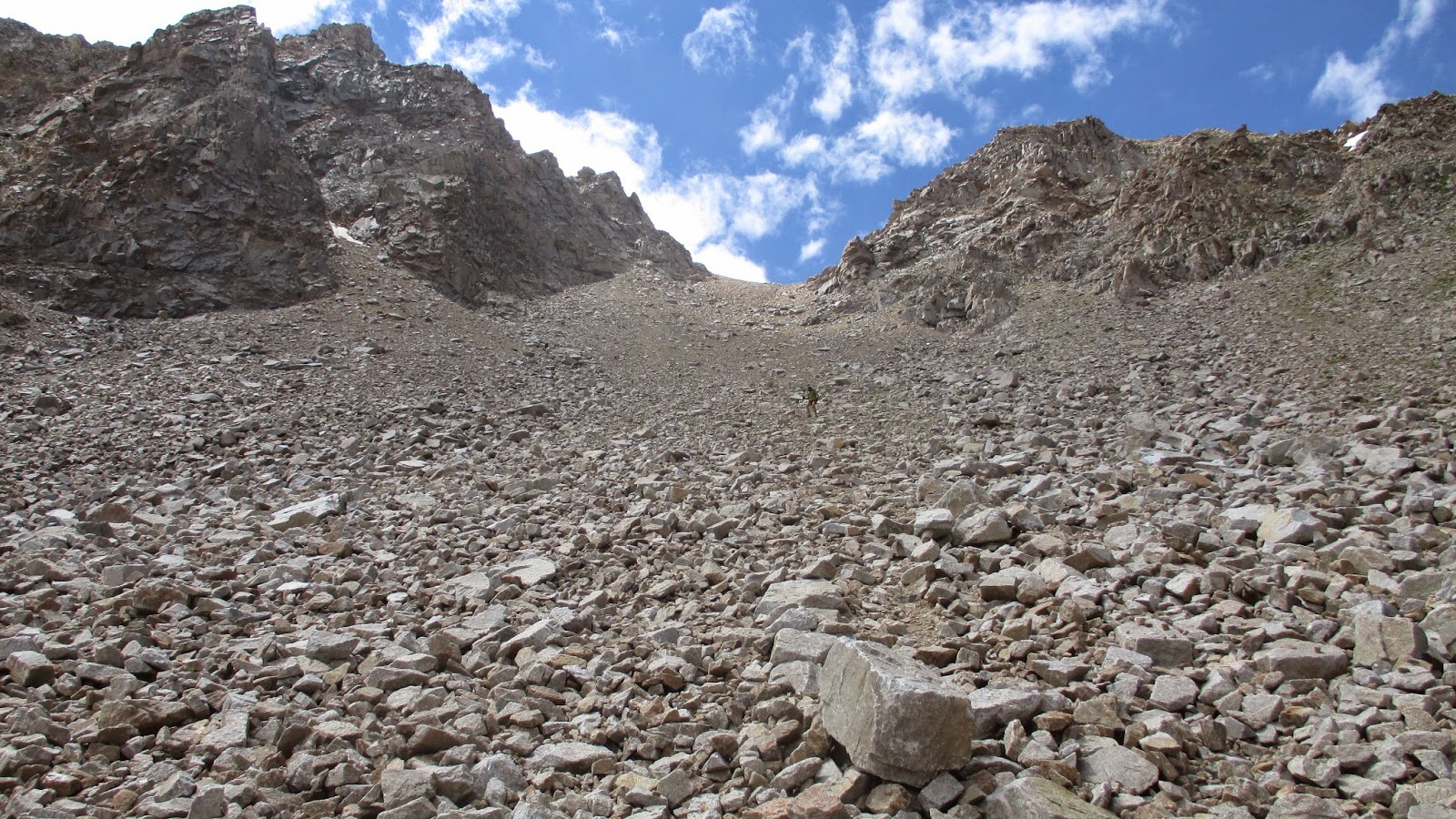 The drop off Huron. 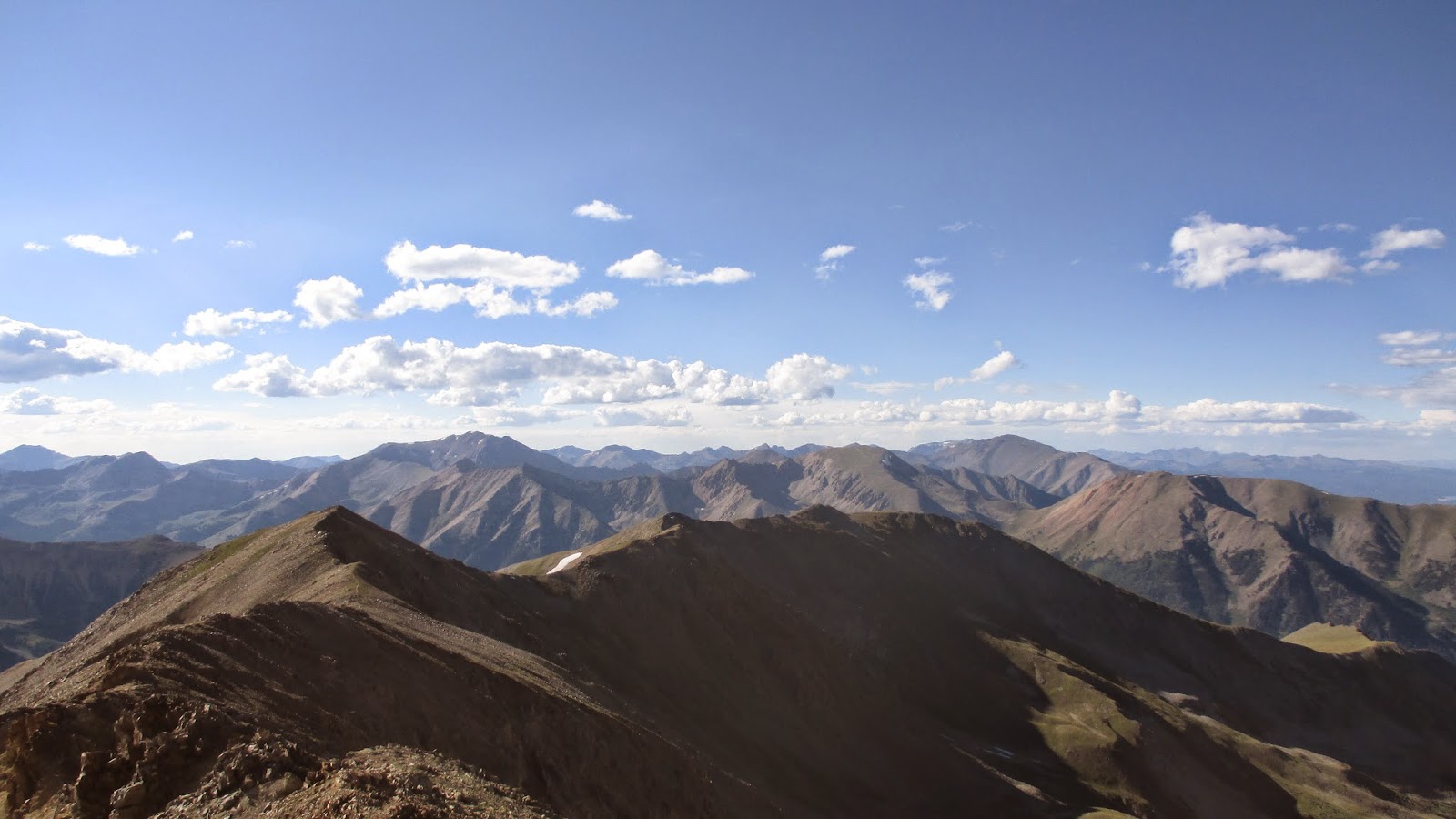 Summit of Missouri looking north - Massive and Elbert cannot be seen, La Plata is the big peak in the distance in the center left of the photo. 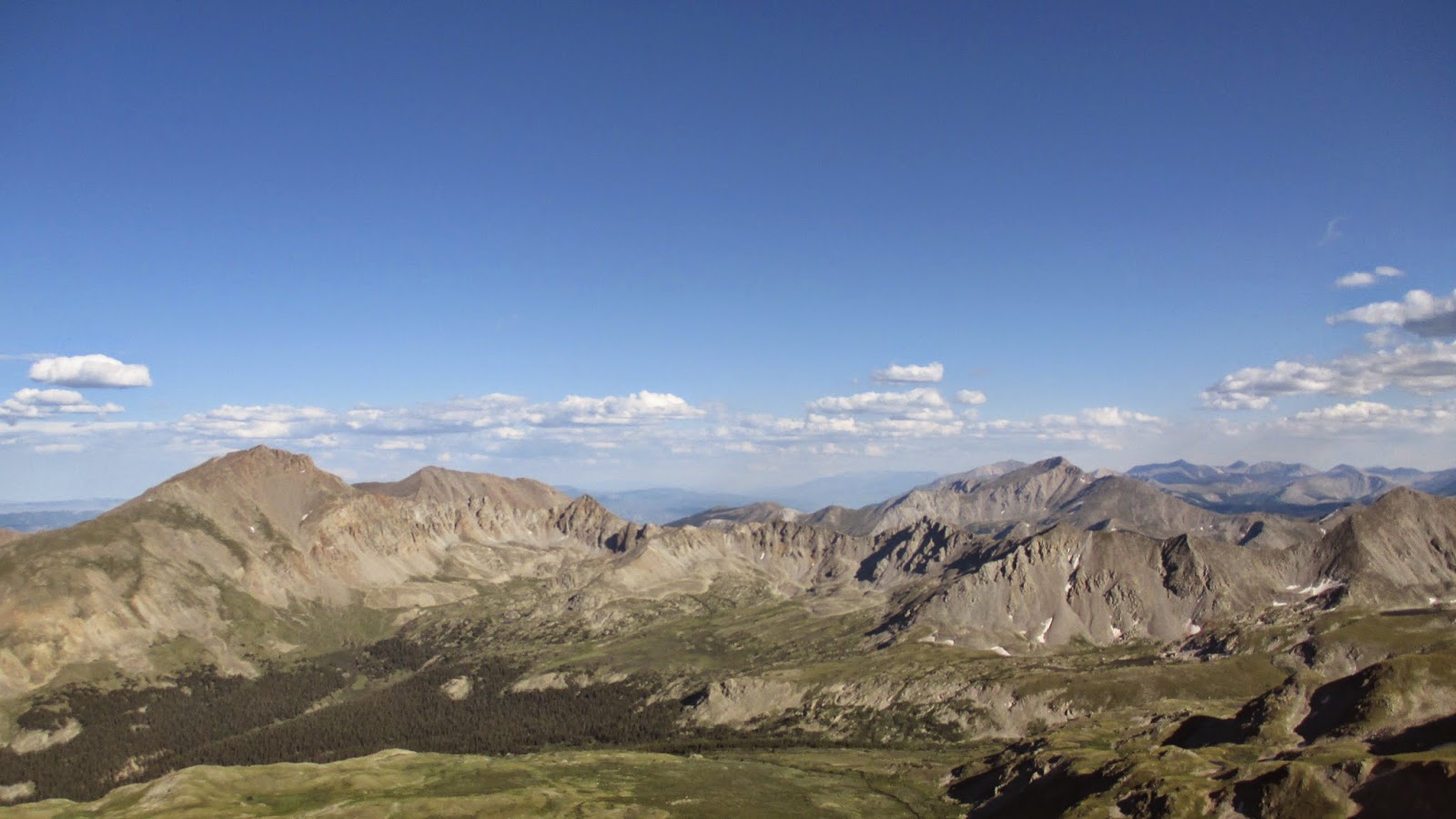 Harvard (left), Columbia (center left), Yale (center right), and then beyond... such a big line!

Email ThisBlogThis!Share to TwitterShare to FacebookShare to Pinterest
Labels: Nolans 14