I went into the Audi Power of Four 50K race with a couple goals in mind: get points in the US Skyrunning series, stay steady and strong for the entire race - don't crash and burn, and use it as a build up race for Nolan's. I'd say I accomplished all three goals, but I still was a bit disappointed in myself.

I won't go into a turn by turn race report, as that really only helps those who ran the course. Instead, the quick summary of the day is that there were three major climbs, two major descents, some traversing, meandering, and then a final mellow descent down to the finish. It rained off and on all day, making the course extremely muddy and wet, but it kept the heat down which was a good thing. I've heard a lot of people gripping about the first part of the course, where we went straight up Aspen and Highlands - pure powerhiking. I've also heard some people complain about the descent off Highlands - straight down ~2,000 in just under 2 miles. I found those sections to be fun and challenging, just what I would expect from a skyrace. My complaint with the course was the last section on Snowmass where we tooled around on tedious singletrack switchbacking slowly down to get in the correct miles to equal a 50K. Basically, I hated the running part!

And really, that is where I fell apart. Going up, going down, no problem, but the long traverse over to Snowmass in the deep mud, and then the tooling around on Snowmass for over 7K to just get in some random miles really killed my spirits and I mentally threw in the towel. I guess I'm just not a "runner" deep down.

I ended up 7th Master and 37th Overall. My watch said the race was 33 miles with 11,000' of gain. Despite my mental failure, I had a great time at the race - incredible course, great aid station volunteers, and a pretty fun day out in the mountains. If there were any complaints, it would be more options at the aid stations (pretty much only water, a few had Coke, and some Clif products) and some sort of medal at the finish line. This last thing seems to be a trend with the Skyraces, perhaps because the RDs need to pay the Skyrunning Federation too much to be part of the series or something, but I know mentally I really wanted something to prove that I slogged through that course. Now I've got less then six days to continue to recover and prep before the Tushar 93K in middle-of-nowhere Utah. 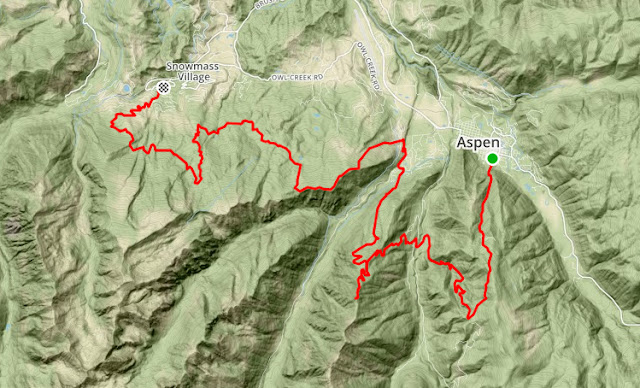