Saturday was the 37th running of the Kendall Mountain race. It was also the first race of the US Skyrunner Sky series. I signed up for Kendall because I wanted to do the US Skyrunning series, and the race sounded pretty cool - run up and down a 13,000' peak. Little did I realize that with the new Skyrunning series, some really stout competition would also show up and make the race a full on competition.

Tara and I pulled into Silverton late Friday afternoon after doing some scouting in the Sawatch. We easily found the perfect camp spot above town looking directly at Kendall Mountain (13,066'). As we were enjoying the sunset and looking at the course, I quickly realized that this was going to be a runner's course, and not so much a mountain slogger's course. Oh well, not my strength but I'd still give it my best. We hooked up with Kendrick, and as the evening progressed he let us know that the favorite was Joe Gray. What? Nine time US National Champion Joe Gray was running? Great, there goes this race. It turns out that the addition of the race being part of the US Skyrunner Sky series attracted a really stout field - and that was really cool. Skyrunning is big in Europe, and this year has seen the expansion of Sky races in Australia, Canada, UK, and the US. However, trail races in the US are much different then those in Europe. We don't have the big crowds, the media blitz, the spectators, the sponsors, and often, the money. What we do have in the US are some solid down-home races with good times and good vibes. So, how would the first Skyrunning race in the US (of the Sky distance) be? Would it be Euro, or stick to its roots? The short end is that Nick and Jamil of Aravaipa Running did an excellent job of bridging the two worlds - still a super down-home vibe with local flavor, yet a stacked and competitive field.

And the competition was thick. During the warmup and start, the pros were doing their warmups, looking sharp while the regular trail runners were milling about with their hydration packs and bottles. The contrast was obvious - racing shorts and singlets, racing glasses, and racing shoes versus hydration packs/bottles, gaiters, and Hookas. Before the start even the local dogs were picking up on the vibe and started to howl and get all antsy - there was some serious adrenaline flowing. Finally, a tad late (classic US style) we all lined up on main street behind a fictitious line and the gun went off. Right away about 30 guys went out at 5 minute pace! Um, this race goes up 3,700' feet at altitude; 5 minute pace will blow up almost everyone. I went out at a conservative 6:30 minute pace until the first hill at about mile one, at which point I gave up even trying to keep an eye on the lead pack and just focused on running my own race. I've been slogging in the mountains all summer, with only a few tempo/speed work sessions to count for this summer, so I was not going to hang with anyone who was in real running shape. My only hope was to outlast people, beat them at altitude, or pass them on the downhill. All three of which happened. The race is 6.5 miles up to the summit, then right back down - 99% of the race is on jeep mining roads with only a few hundred feet on semi-technical ground to reach the actual summit. I was probably around 40th place by the halfway up point, where Kendrick was manning an aid station. From there, I dropped into a power hike which I knew I could sustain for a very long time, as opposed to continuing to suffer in some sort of run shuffle. I moved up a place or two on some of the steeper sections, and then as we got into the thinner air I started to gain ground. Finally, I was coming into my element, and with the final technical section to the summit I passed three people on the ascent. I tagged the summit and quickly turned around and started to run down the technical stuff - passing more people once again. This section really separated the runners from the mountain sloggers. I started to push the downhill, and passed several more people as I bombed back down the mountain. After I had passed everyone that I could see, I committed a fundamental error - I gave up racing. I kept up my pace, but my desire to really push faded as I dropped into my usual mental state of just cruzing back down a mountain. I realized this psychological mistake as it was happening, but I could not force myself to push hard(er). There were no rabbits for me to focus on, and I figured everyone in front was too far ahead for me to catch them, so I mentally quit racing. Finally, after the long descent, there was a painful flat and then subtle uphill section to town and through a few blocks to the park and finish. I crossed the line in 2:12:57, which was good enough for 27th overall.

Initially I was disappointed in my performance. I knew I was not in running shape for this kind of race on this kind of road terrain, but I was hoping for a higher placement. However, after learning about who was in the field, and looking at previous race times, I'm fairly happy. Last year only 2 people finished under two hours, and only 5 under 2:10. So, on any other year I would have been in the top ten for sure; but it was not any other year, it was this year. A Skyrunning year. So, despite my initial disappointment, I'm actually fairly pleased. For not having done the right kind of training for such a race, I am happy with how I stacked up against some of the best in the country. What I am not happy with is my mental weakness. I've only been racing for about two years, and I never raced before that (in high school or college), so I don't have the background to draw upon. I'm also not very competitive in most regards. Still, that is no excuse for my mental state during the race. I know it takes a lot of practice and experience to be able to race well, and to keep the focus and mental acuity to continually push hard, and that is something I'm working on. But I guess it was a bit disappointing to realize I still have so much work to do on this end. Perhaps if there was someone right next to me like at the Scar Top race a few weeks ago, I could have kept my race game going, but with no one there to really push me I just didn't have it. Perhaps because I thought I was much farther back in the field then I actually was I didn't have the desire to keep pushing. I don't know, but it is something I need some serious work on. 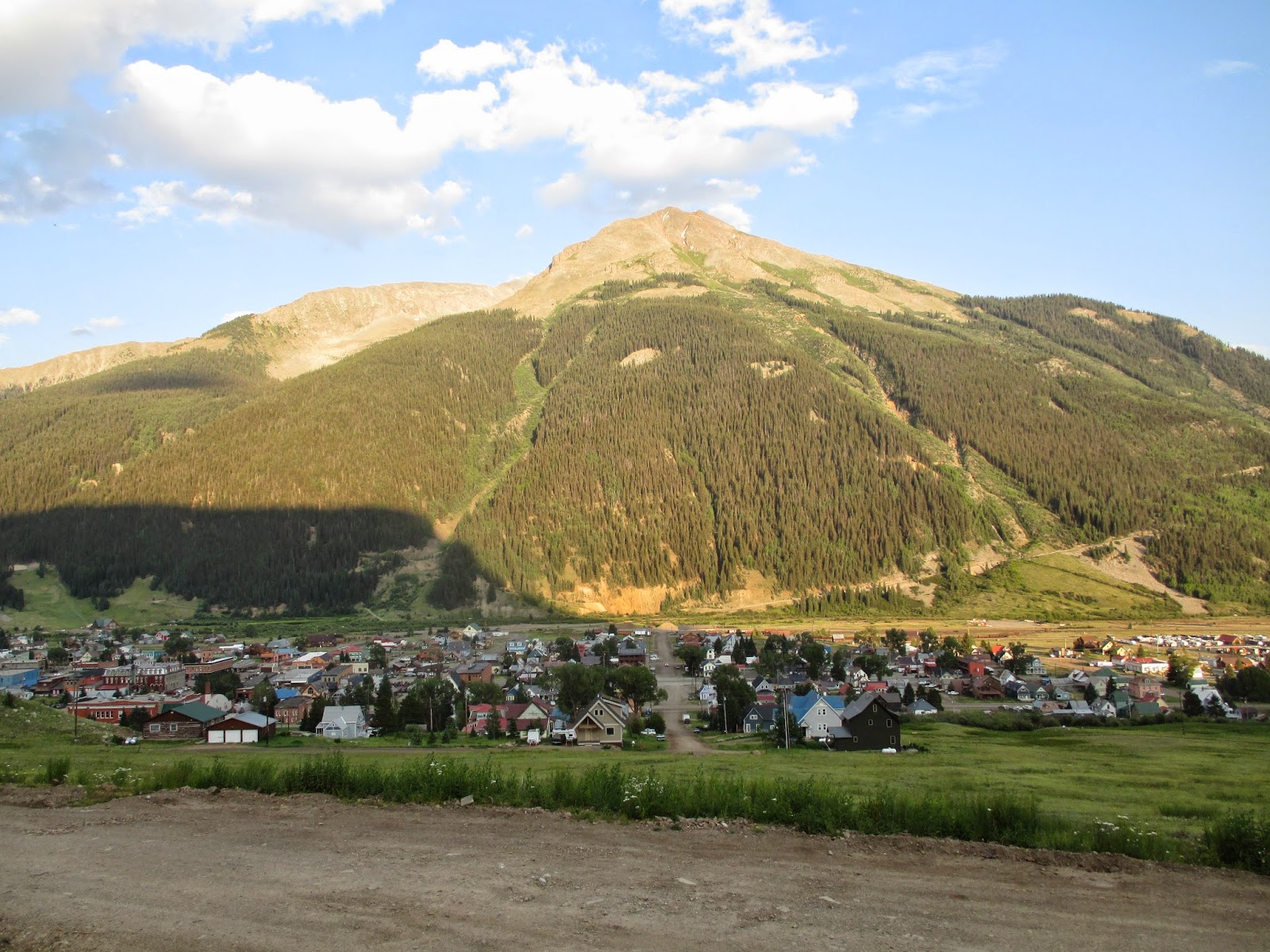 Silverton and Kendall Mountain from our camp site. 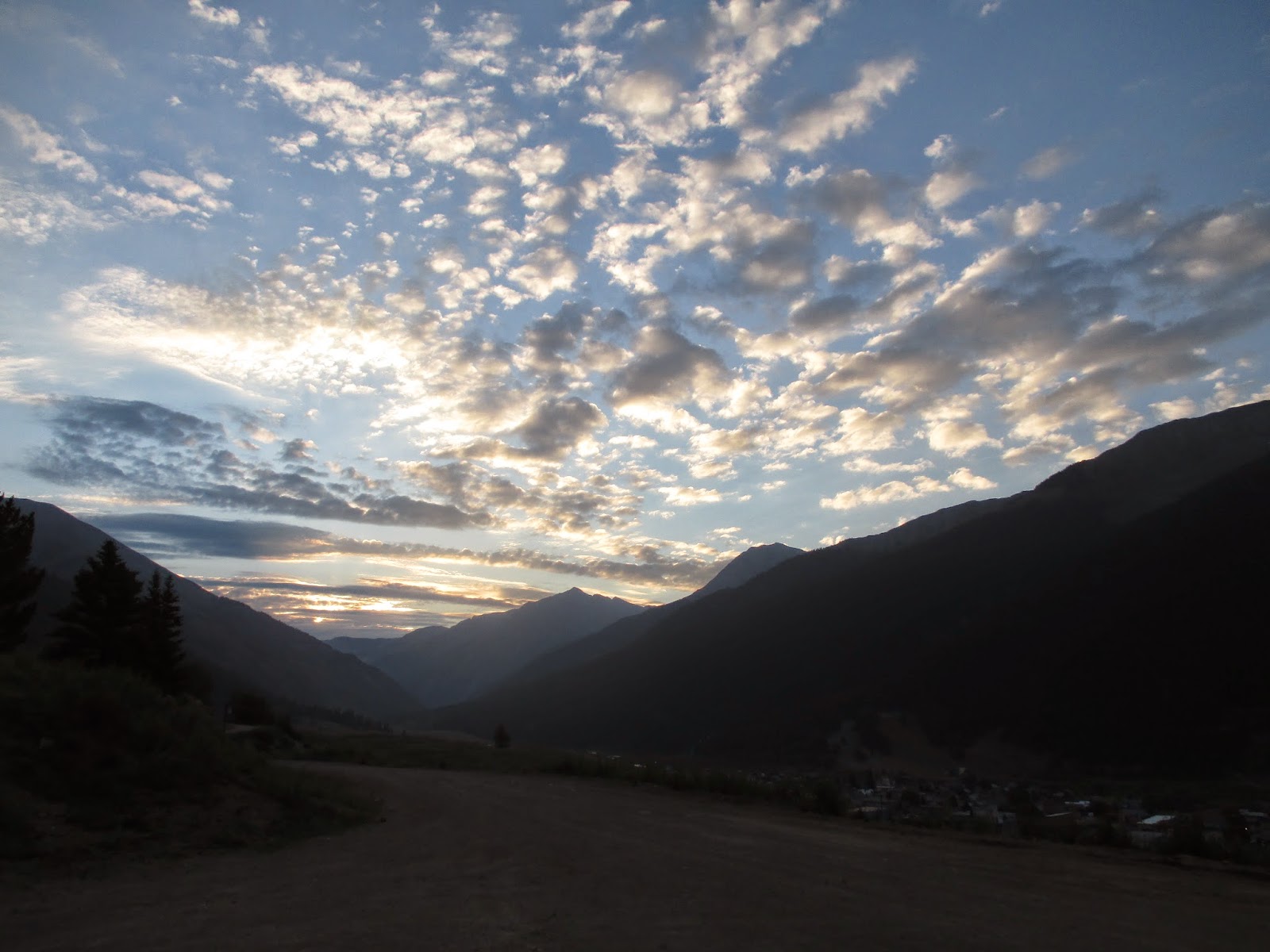 The following day, Tara and I went and did Shavano and Tabeguache, two 14ers at the southern end of the Sawatch. I could tell I raced the day before, and was pretty much gassed the whole time, but still made it up both summits and back to the car before 9:00am - 3:27rt. 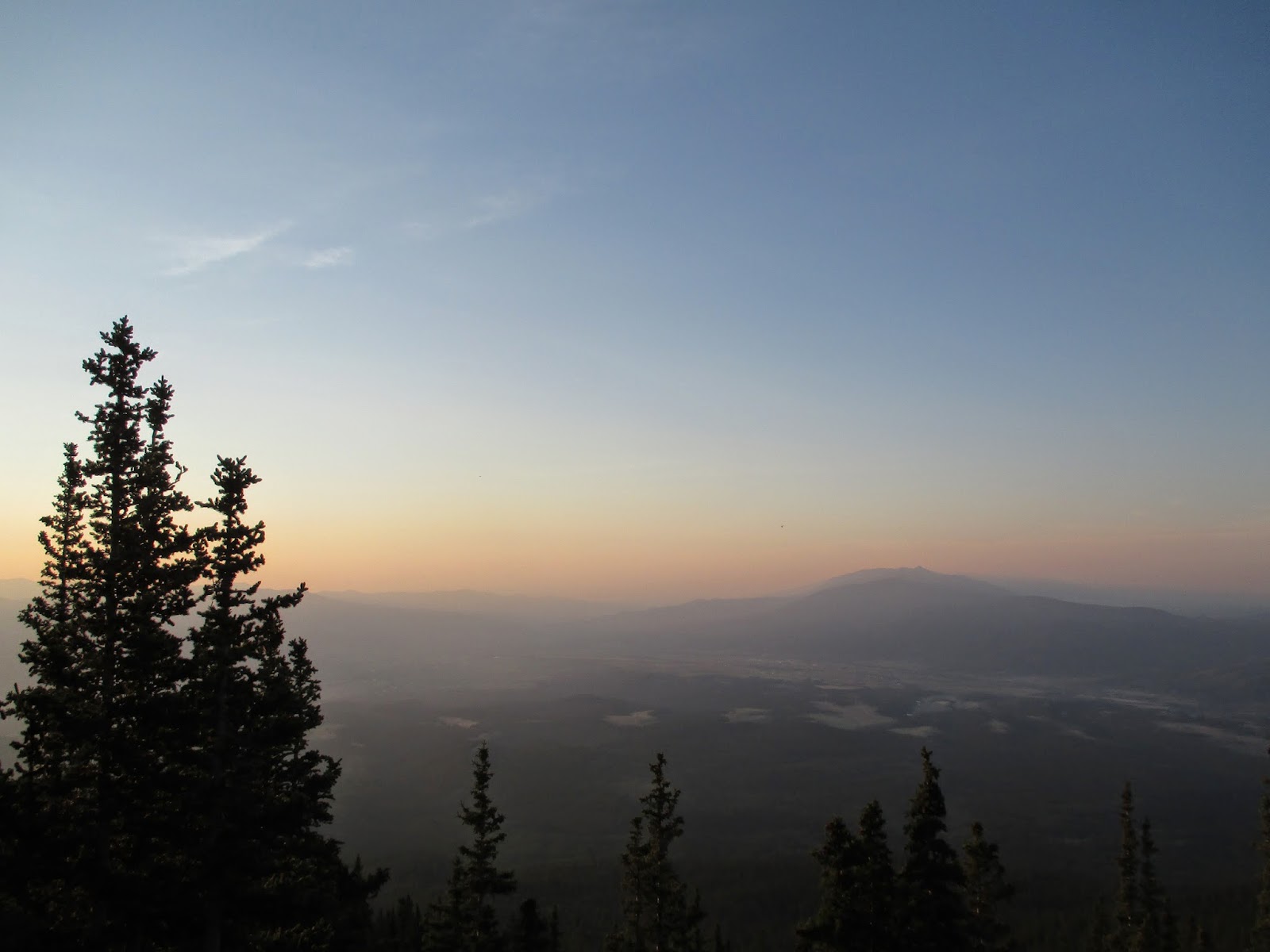 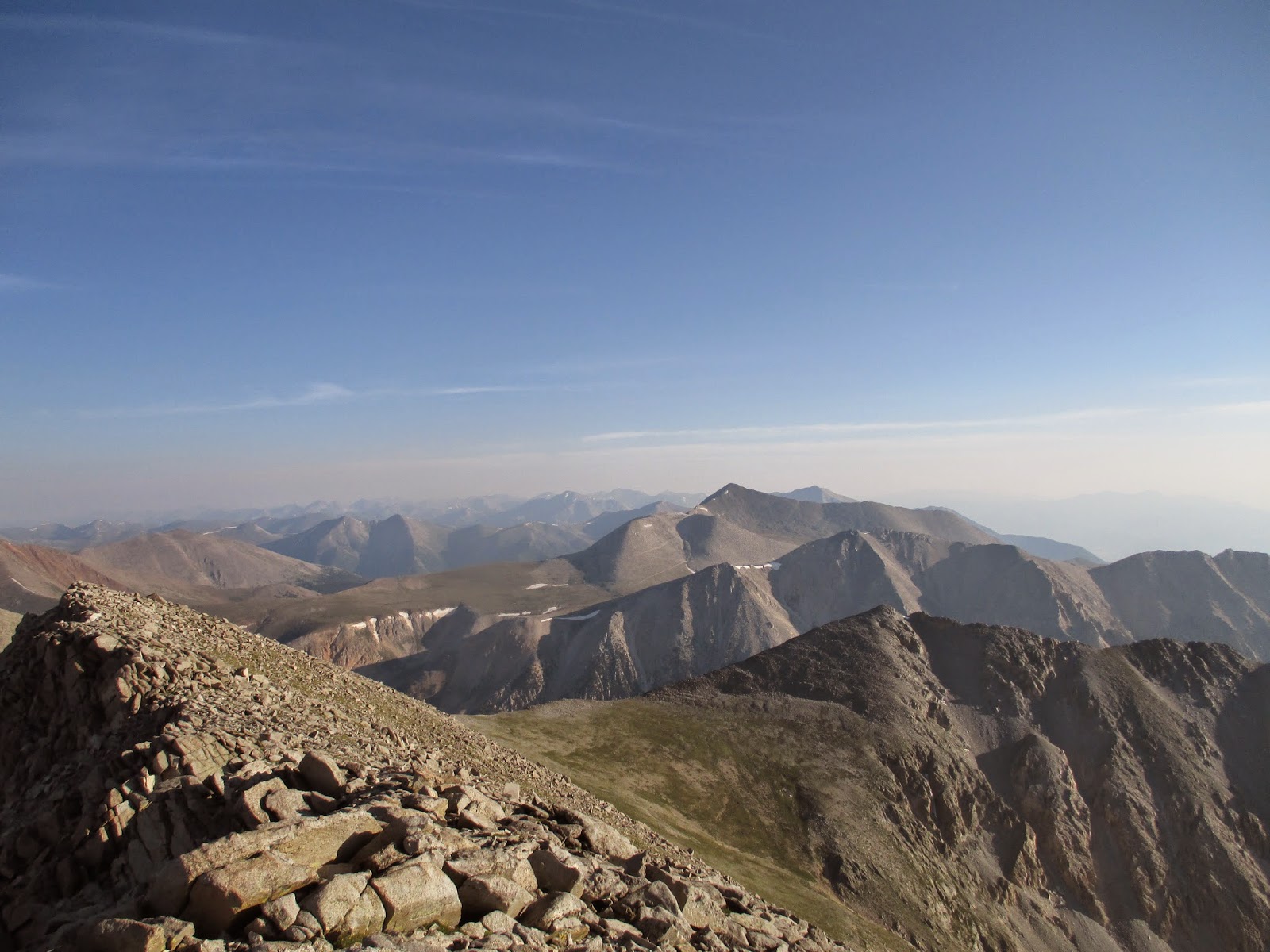 On the summit looking north. 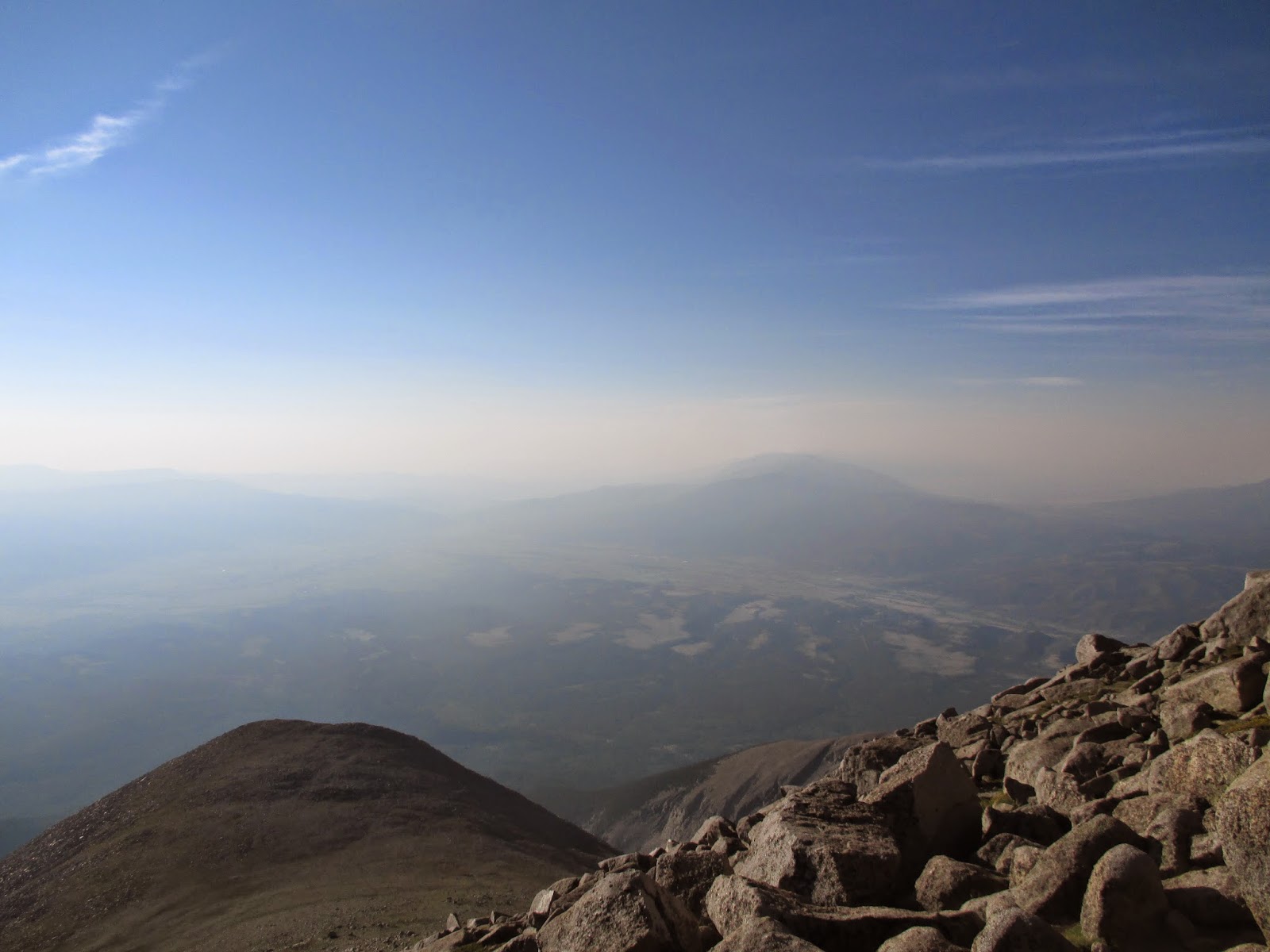 Lots of haze in the Arkansas Valley due to all of the humidity. 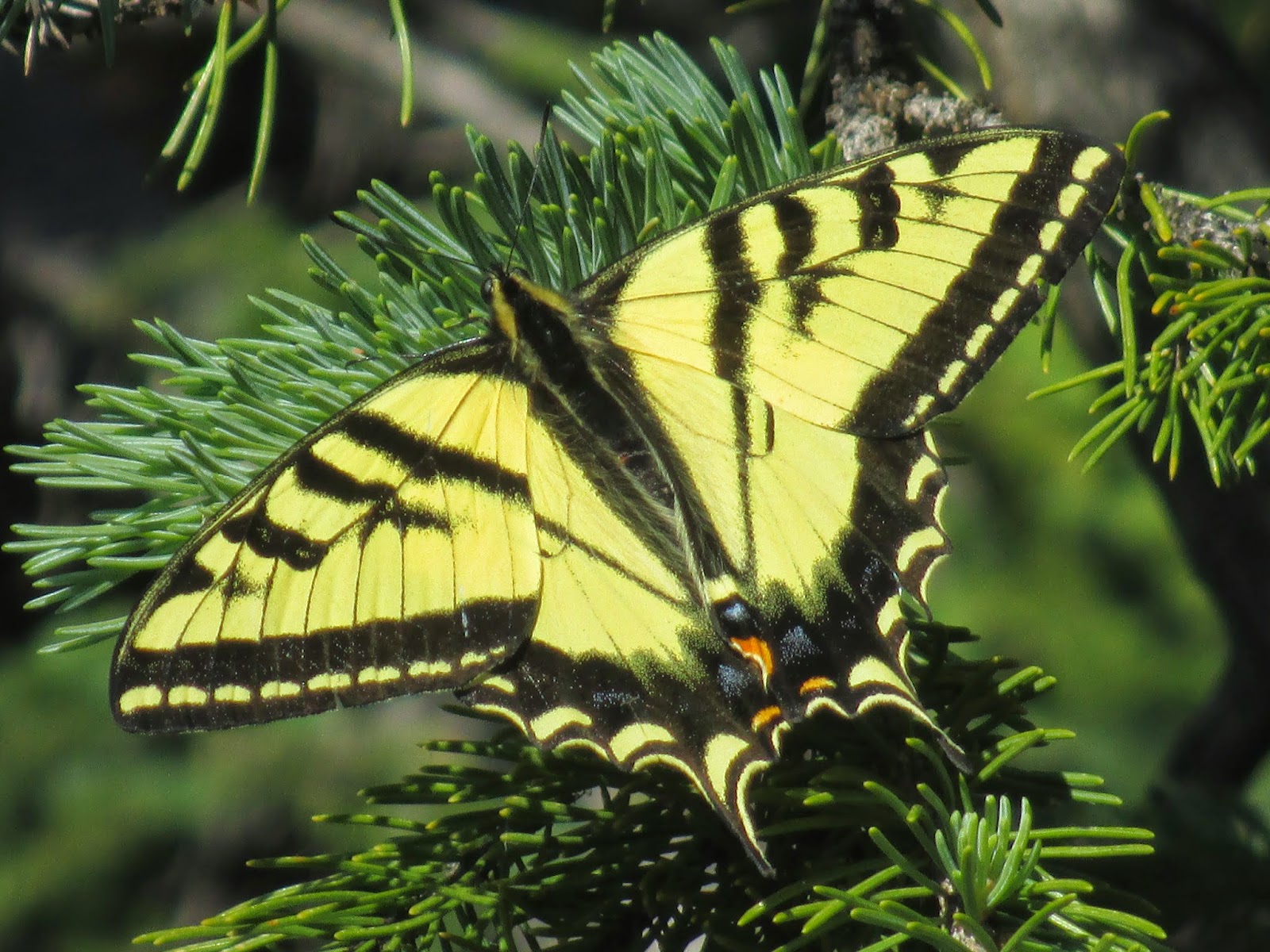