After four days of semi-rest from the Sage Burner 50K, we did the Balarat 21K out of Jamestown. We knew we were not going to post any amazing times, as both of us were still in recovery from our massive bonk at the 50K on Monday. However, we need race experience (this was our second race ever). There are so many aspects to racing as opposed to just trail running that if we want to even have a decent time at any upcoming races, we needed to get some more experience in. 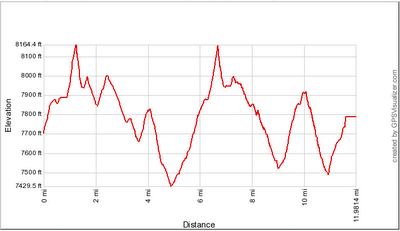 The Balarat 21K was pretty fun. Some decent ups and downs, on some nice trails (much more "technical" then the Sage Burner - roots, rocks, grass, etc.). The race was basically a figure eight, with several well stocked aid stations (Power Bar was a sponsor, so they had random power-stuff at the aid stations). At the start, I went out much better with the shot of the gun then on Monday, but I almost instantly noticed that I was tired and hot (despite training at elevation, I noticed slightly heavy legs, quick heartrate, and labored breathing) on the first climb. Obviously I was not recovered. After that, I was able to get into a better groove, but could not push on any of the hills. My fueling was much better, and my start from the gun was good so that I was positioned in a good place once we hit the single track. I did the 21K in 2.07:45. Not good, but not bad considering. More lessons were learned, and slowly I am getting the whole race idea figured out. Looking forward to the next one!