On Saturday I ran the Fear the Deer race, which was held on the trails of Deer Creek Canyon park. This was my second race of the season, and I was looking forward to running the course. I felt pretty good going into the race, and although I didn't taper too much, I was hoping for a good result. However, I also knew that this would be a fast race, as it seems trail half marathons are here on the Front Range. Tara and I got there early and had a nice warm up, and although my legs didn't feel snappy, they didn't feel bad either. After waiting at the start line for the last bus of runners to show up (most runners were bussed in from a distant parking lot), the RD went over the course and then we were off. The race course goes up Plymouth trail, which starts out mellow but quickly gets fairly steep and climbs over 1,600 feet in 2+ miles. I went out in the front, but quickly hit a redline and had to slow down a bit. Although I had warmed up, I neglected to stay warm and after standing around at the start for an extra 10-15 minutes waiting for the gun (the race started late because of the busing), I had cooled down. So when we really started, I was no longer warmed up and my HR skyrocketed. This was a big mistake on my part.

After struggling through the initial climb and re-warm up, I started to get my groove and began to finally race. I was in 21 place at this point based on how many people I caught and passed over the rest of the race. The rest of the race was uneventful, as I was able to keep my pace along most of the other climbs and descents (although I took a nice fall towards the end and have a good bruise and some scrapes on my elbow). I was able to reel in 3 other runners over the next 9 miles, and if the race had been 1 or 2 miles longer, I could have caught 3 more as they were only a few hundred feet in front and clearly fading fast. I crossed the line in 1:55:05 which was good for 18th place overall.

This race demonstrated to me again that I do not have the raw speed that many people do for these shorter races. Half marathons are brutally fast, and to be competitive one has to do a substantial amount of speed work. I also learned the true importance of warming up and being warm when the gun goes off. Although I had warmed up, the 10-15 minutes of waiting at the start line for the RD to get things together was not smart. I should have kept active so that I didn't redline so quickly. This may not be as true in longer races, as the one's I've done don't seem to go out nearly as fast as this race did. Despite this, I'm happy with the result, and glad I did the race. I learned more valuable mental and physical lessons for future races. 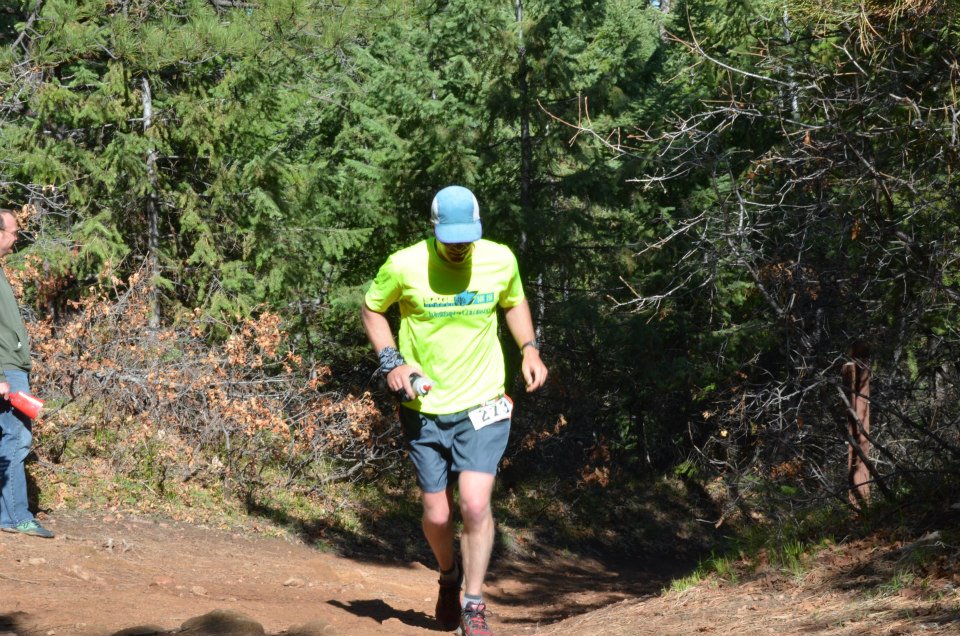 Nearing the top of the final climb (around mile 9)

Email ThisBlogThis!Share to TwitterShare to FacebookShare to Pinterest
Labels: races