Fast! That about sums up the Bear Creek 10 Spot race. Yesterday was the 4th annual race, and boy was it fast. Held right outside of Morrison, the race is 10.4 miles (two laps) on a fairly flat course of trails and dirt roads. I've never run a race this short, nor this flat, but with the goal of getting more race experience, I figured it would be a fun time. Now, I don't do much, if any, speed work. I try and push myself on certain loops up in the valley, but otherwise, I train for longer events. So, when the gun went off, I knew right away that I had no chance of placing anywhere in the top 20. The lead group took off at a full on sprint, and the guy that won ran an average of 6:02 pace! Pretty darn fast. After the first couple hundred yards, I was in 29th place, and I kept that place almost until the end, where I finished in 1:20:27 good for 32 overall (out of 116). My average pace was 7:45, which may be the fastest I've ever run at that distance. 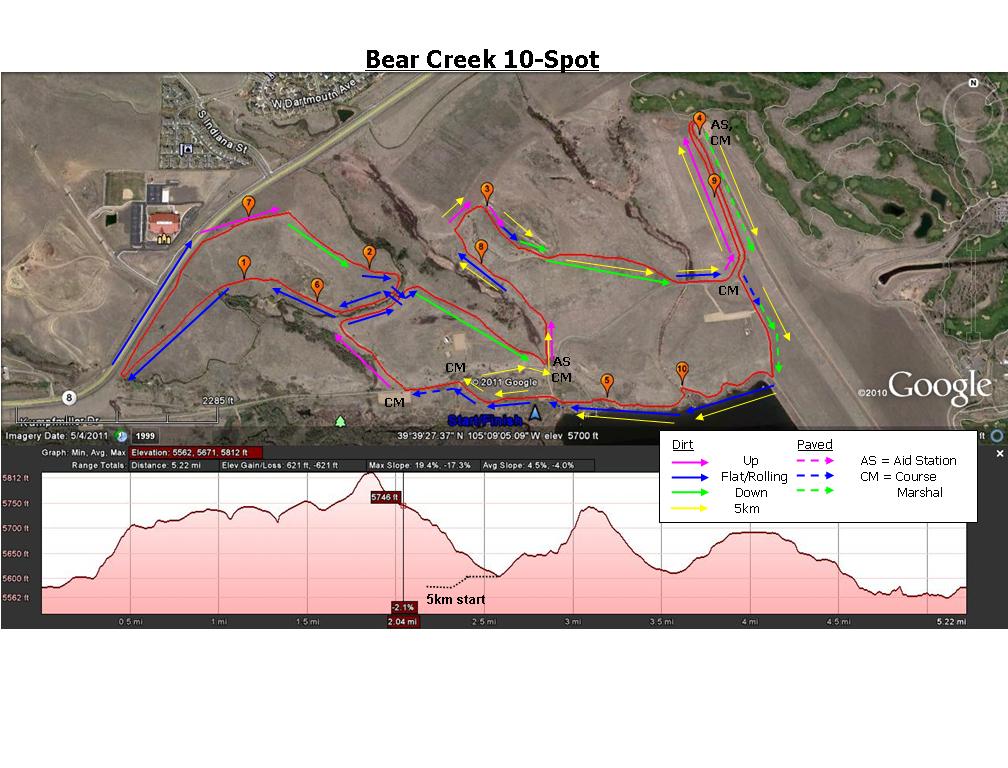 A couple of interesting observations. One, within literally a few hundred yards my overall place in the race was decided. I never passed anyone, and no one passed me. I find it very interesting that my overall place was already decided from the beginning. Of course, if I had crashed and burned, I would have dropped back, but again, this shows to me just how important the start is. I've also noticed this in the ultras that I ran, in that I was basically in the place I finished right from the start.

Also, the race was impacting. By that I mean both Tara and I noticed that after the race it felt like we had run on pavement, not trails. The trails at Bear Creek are fairly hard, Front Range compacted mud/dirt. The surface may have played a part, but also the speed at which I ran also made the race impacting. As I said, I don't do speed, and running all out for 10 miles really hard puts a big impact on one's knees, feet, etc.

All in all, a great race. It is fun to run these faster races with the speedsters of the Front Range, simply because you get to toe the line with some really fast people, but also because it really pushes you as a runner. Obviously, I'll never place good at these races unless I spend some time training speed, but I still think I learned so many lessons - lessons that I am still processing - that when it comes to the longer races next summer, I'll be much better at them. If you are looking for a fast 10 mile trail race to do in the fall, and you want to see how you will stack up with some of the faster runners in the Denver area, I definitely recommend this race.