Grays And Torreys And A New Slew Of Articles

Grays and Torreys and a New Slew of Articles

Went up Grays and Torreys this morning for my weekly jaunt. I was worried that I was not going to get in the summits this week due to work schedules and the storm, but decided to give it a try today since this was my only open day and I didn't want to break my weekly streak (12 straight). The storm that rolled through last night dropped about 3" at Bakersville, providing a fresh layer of snow from the start. By the time I got to the summer trailhead, it was closer to +5" and the winds had done a wonderful job of completely covering the trail with nice thigh-high drifts. Needless to say, it was slow going and exhausting, as breaking trail the entire way quickly wore me out. However, I pushed on and found some snow free spots around the big sign before hitting the real deep stuff near the bottom of the face. I've got the trail fairly wired, so it was no big deal that it was totally obscured for parts of the way, but breaking trail over talus can be frustrating. The winds were howling and low hanging clouds persisted the entire time, so there was no clear summit shots. The lone mountain goat that I saw last week was there, in almost the same spot as last time. Other than him, I had the entire mountain and valley all to myself. With all of the snow it took me 4:09 for the roundtrip from Bakersville, which is OK given the conditions. On the way down I ran into some idiots who tried to drive up and got their car stuck - only about 500 yards from Bakersville! 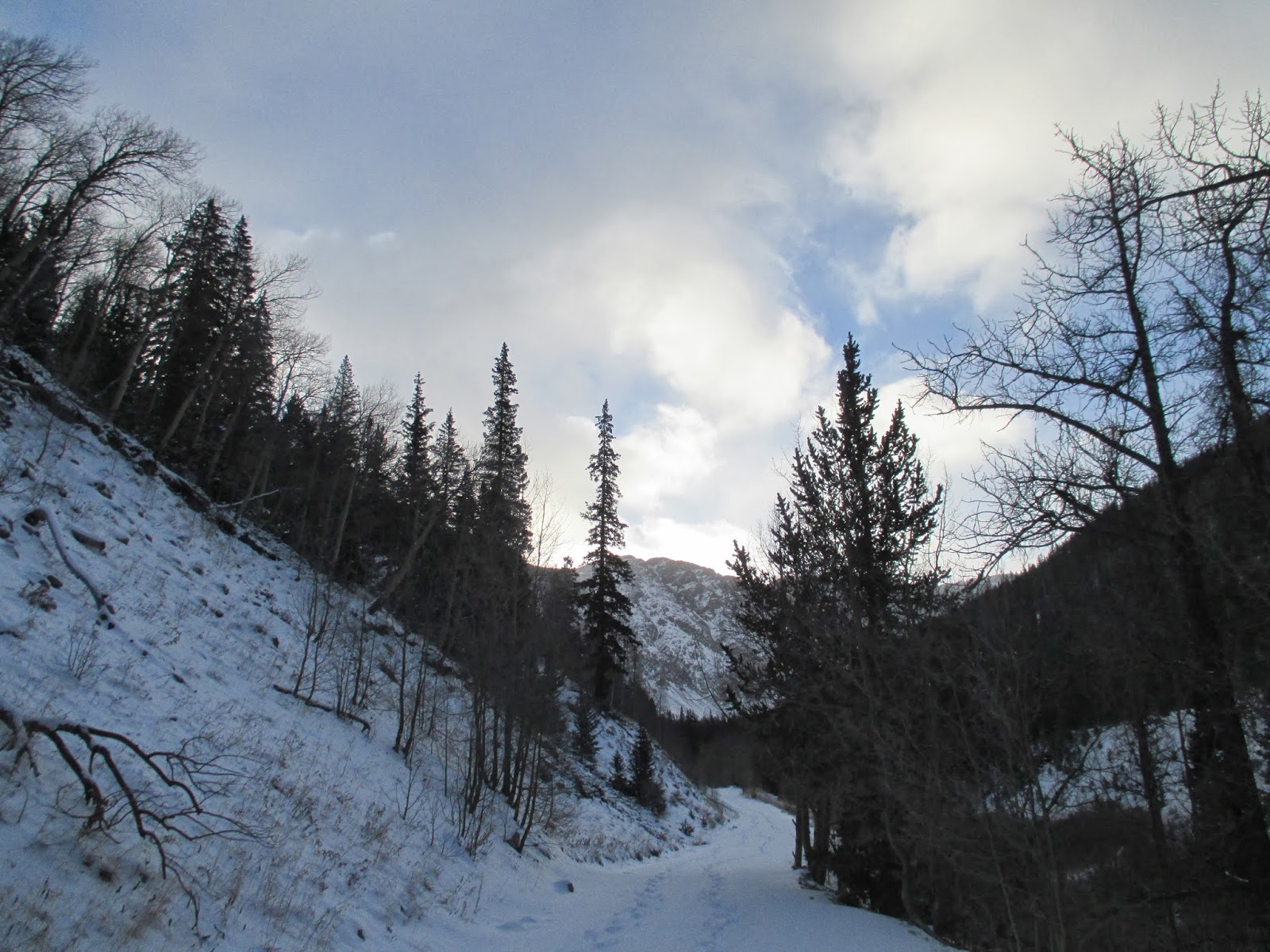 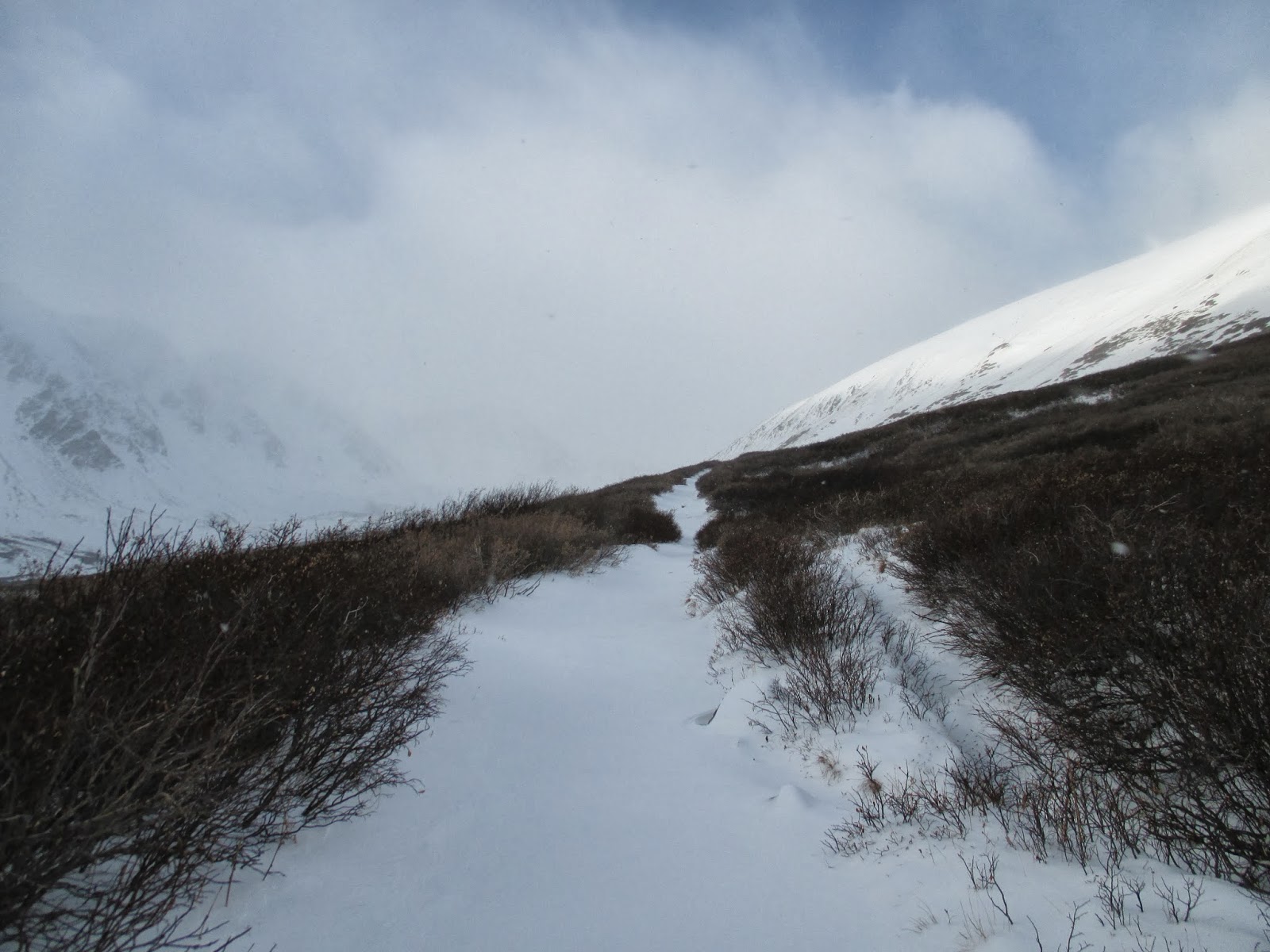 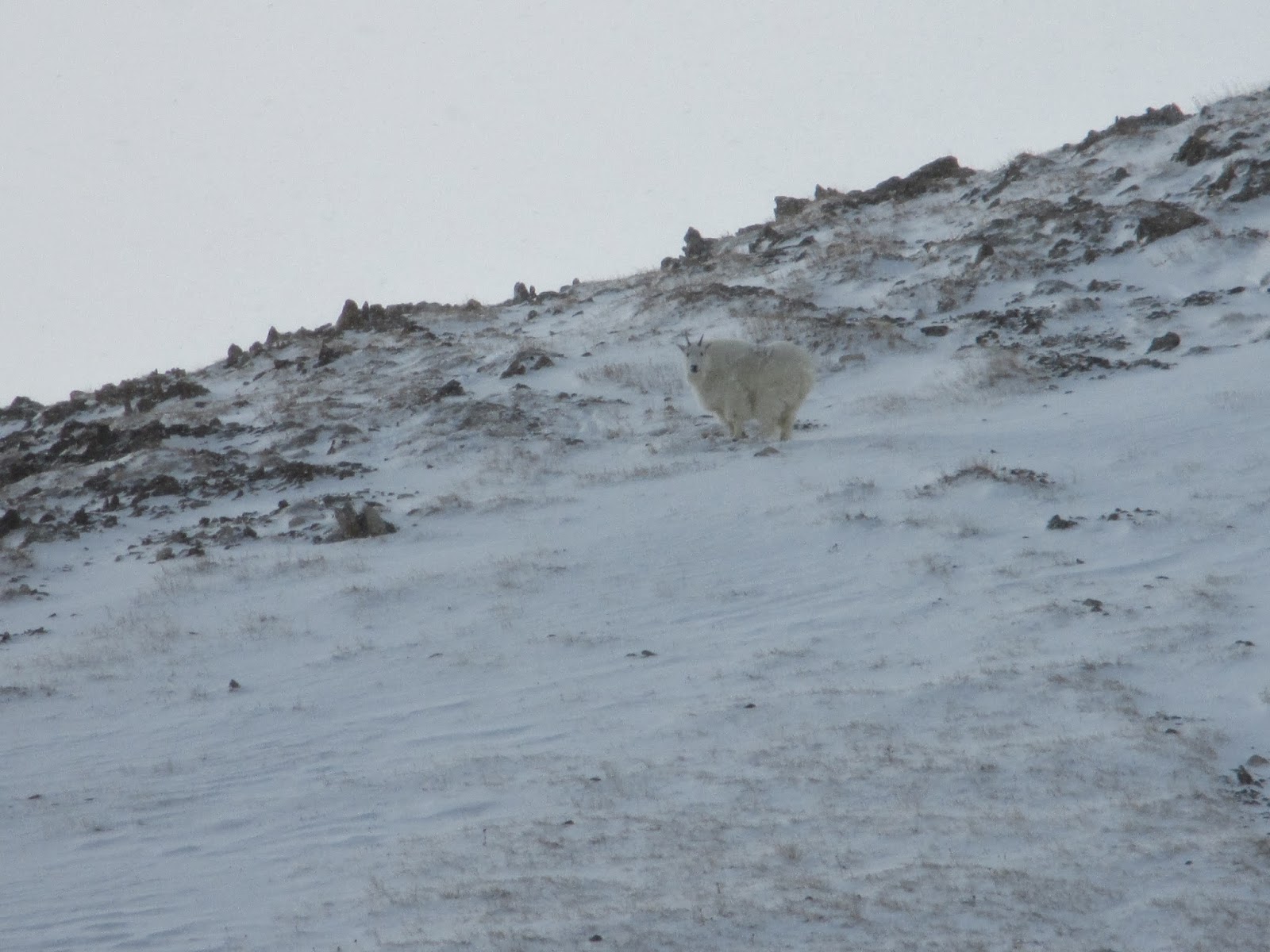 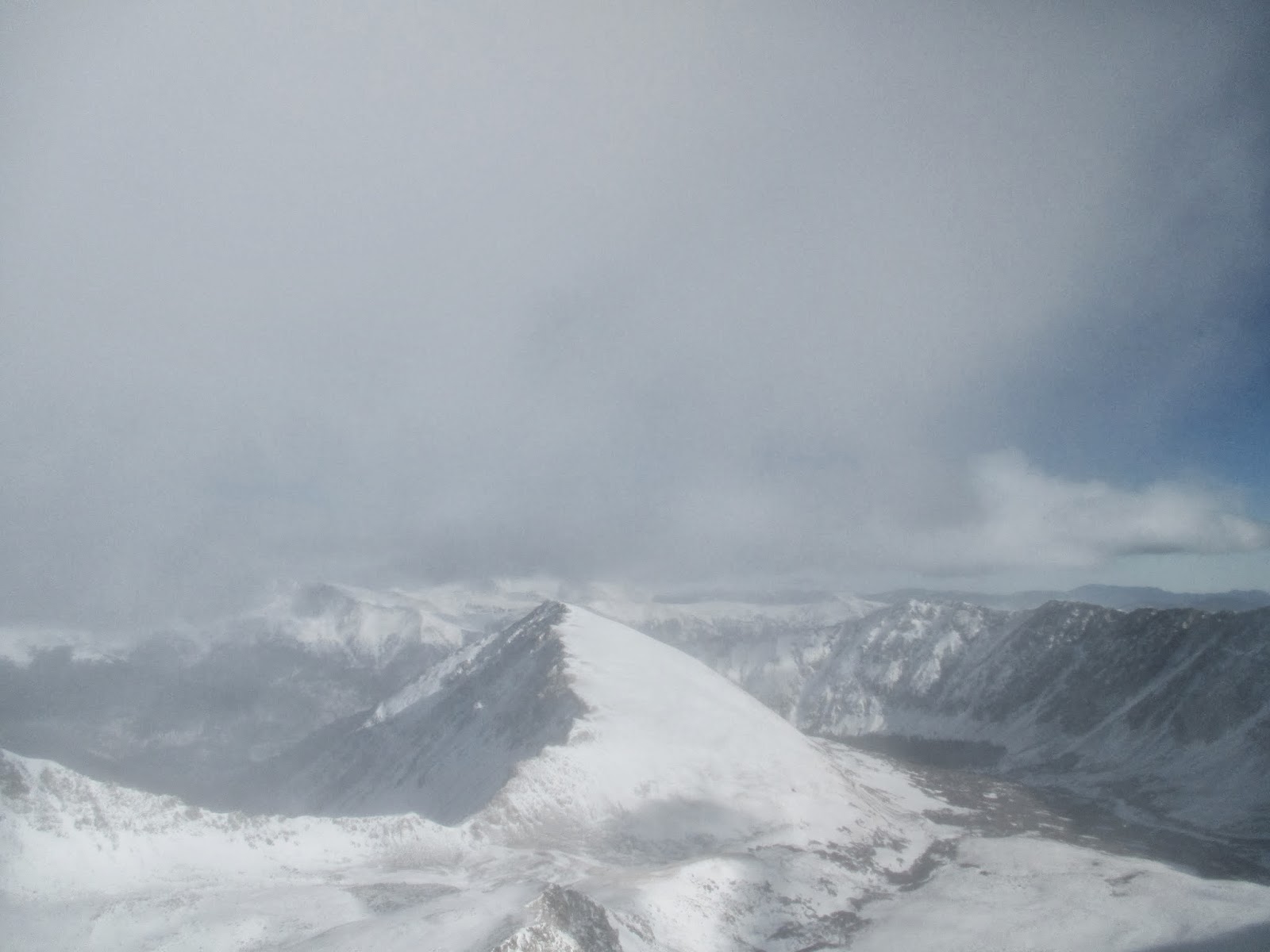 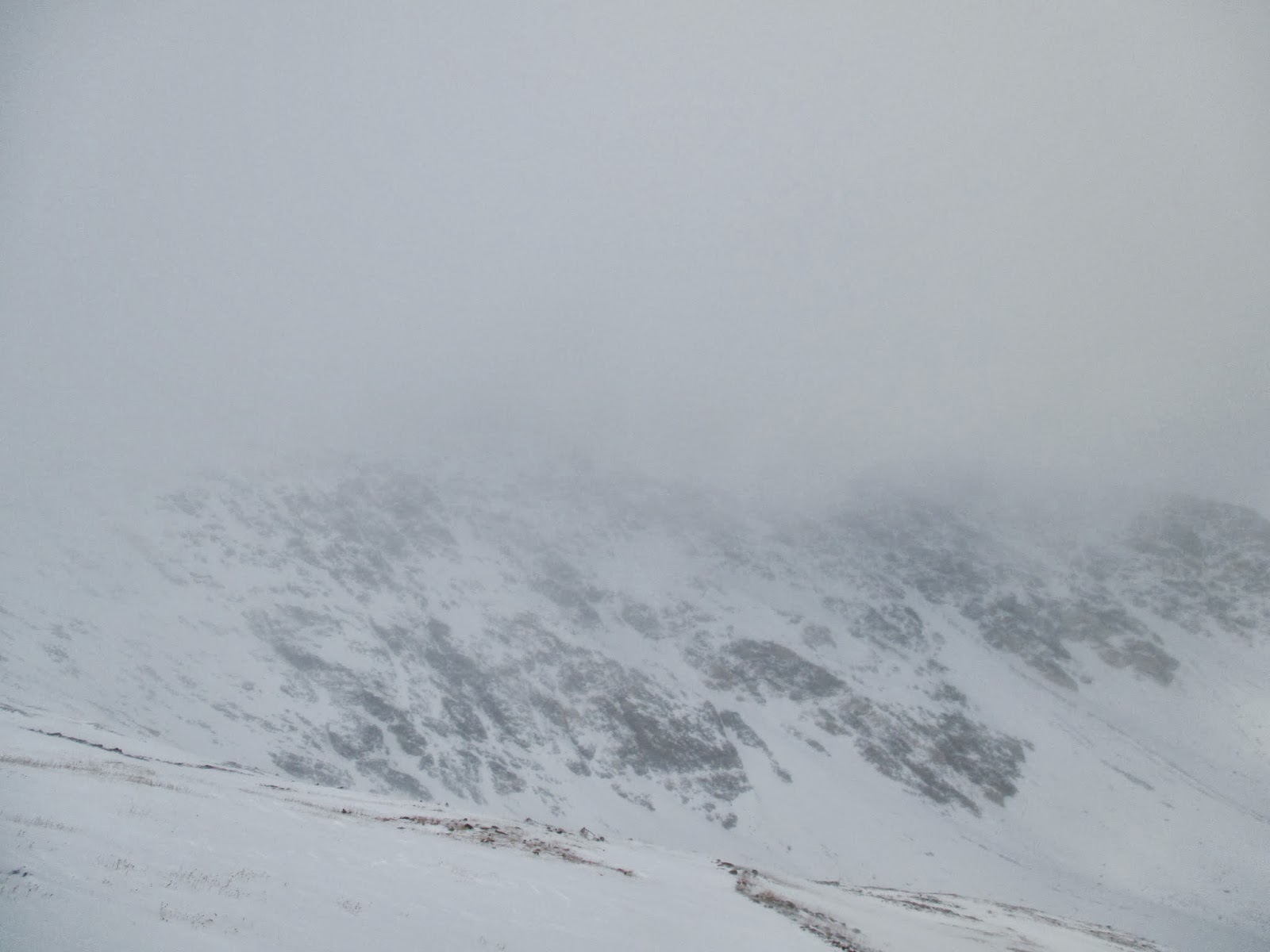 A series of new articles just were published in the British Journal of Sports Medicine. The titles are:

EFFECTS OF DIETARY NITRATE SUPPLEMENTATION ON 5 KM RUNNING TIME TRIAL PERFORMANCE IN TRAINED FEMALE RUNNERS - looks like it might be time to start taking nitrate supplements (via beetroot juice) if you want to improve your 5K or shorter times. Previous research has also demonstrated a benefit of nitrate supplementation (see here and here).

CHANGES IN LABORATORY AND FIELD-BASED MEASUREMENTS IN HIGHLY TRAINED ENDURANCE RUNNERS ACROSS A TRAINING YEAR - If you want to improve, increase training distance AND percentage of time spent above threshold velocity. More, longer, and harder (with qualifications).

THE RELATIONSHIP BETWEEN OXYGEN UPTAKE AND WORK RATE BELOW AND ABOVE LACTATE THRESHOLD - Looks like if you get tested, the methods being used are pretty accurate in terms of predicting max V02.
1 comment: Links to this post

Email ThisBlogThis!Share to TwitterShare to FacebookShare to Pinterest
Labels: Grays and Torreys, science

Deer Creek and Grays and Torreys

Deer Creek and Grays and Torreys


Amazing what a day can do, and what a week can do. Two days ago I ran the outer loop of Deer Creek Canyon, the southern most park in the Jefferson County system and one of the best. With a more "southern" feel because of all of the gamble oak, the trails at Deer Creek offer a spectacular ~12 mile loop run with around 2,800' of gain. The colors were just past peak, but still showing well. Earlier this spring I ran the Fear the Deer race, which covers the same trails but adds the two out-and-backs to make it a solid 13 miles. Without the extra mile, I was able to run the loop in 1:43 at a nice MAF pace (or what I believe to be MAF pace since I don't have a heart rate monitor, but basically a nice sustainable cruising speed). 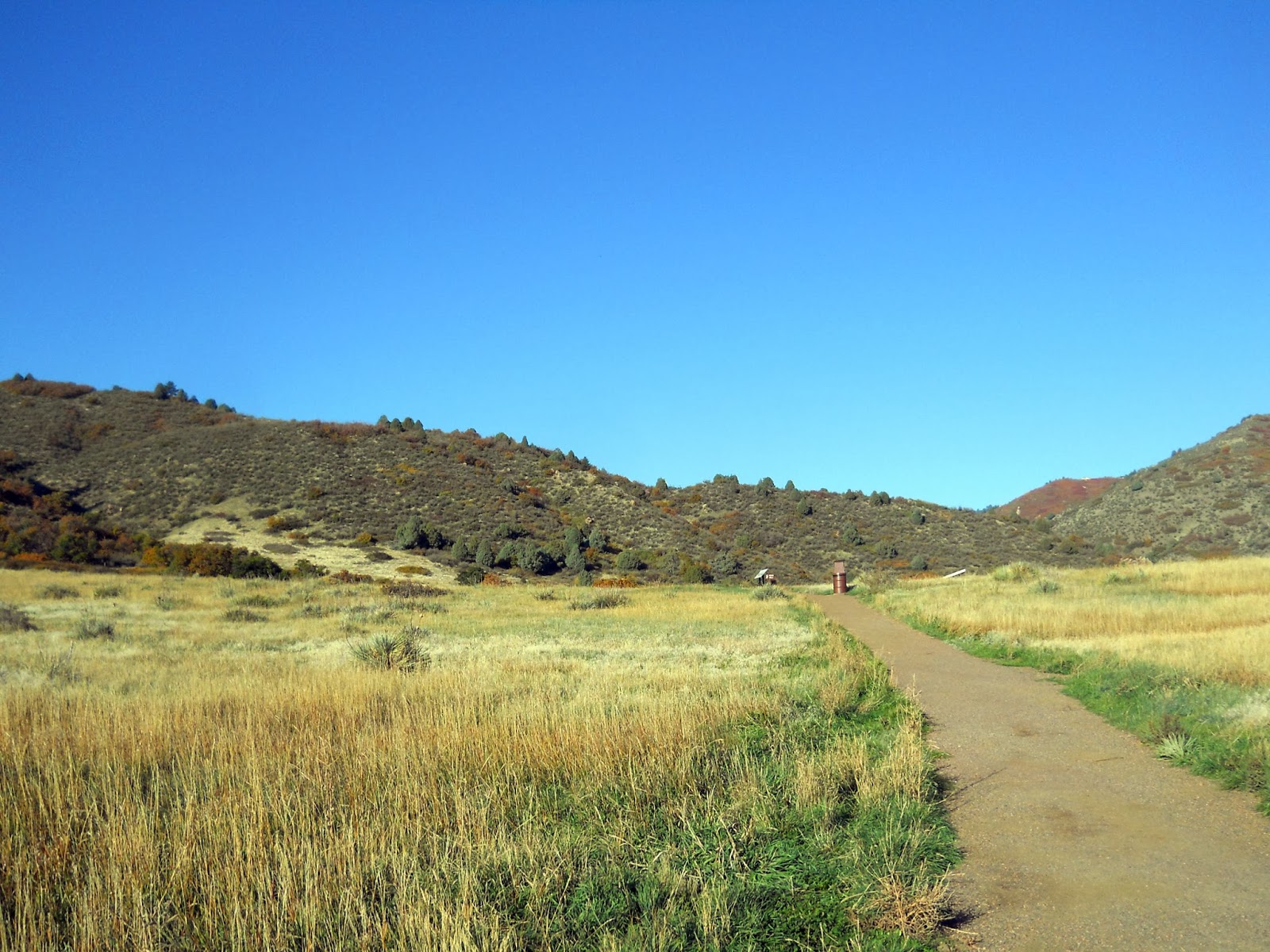 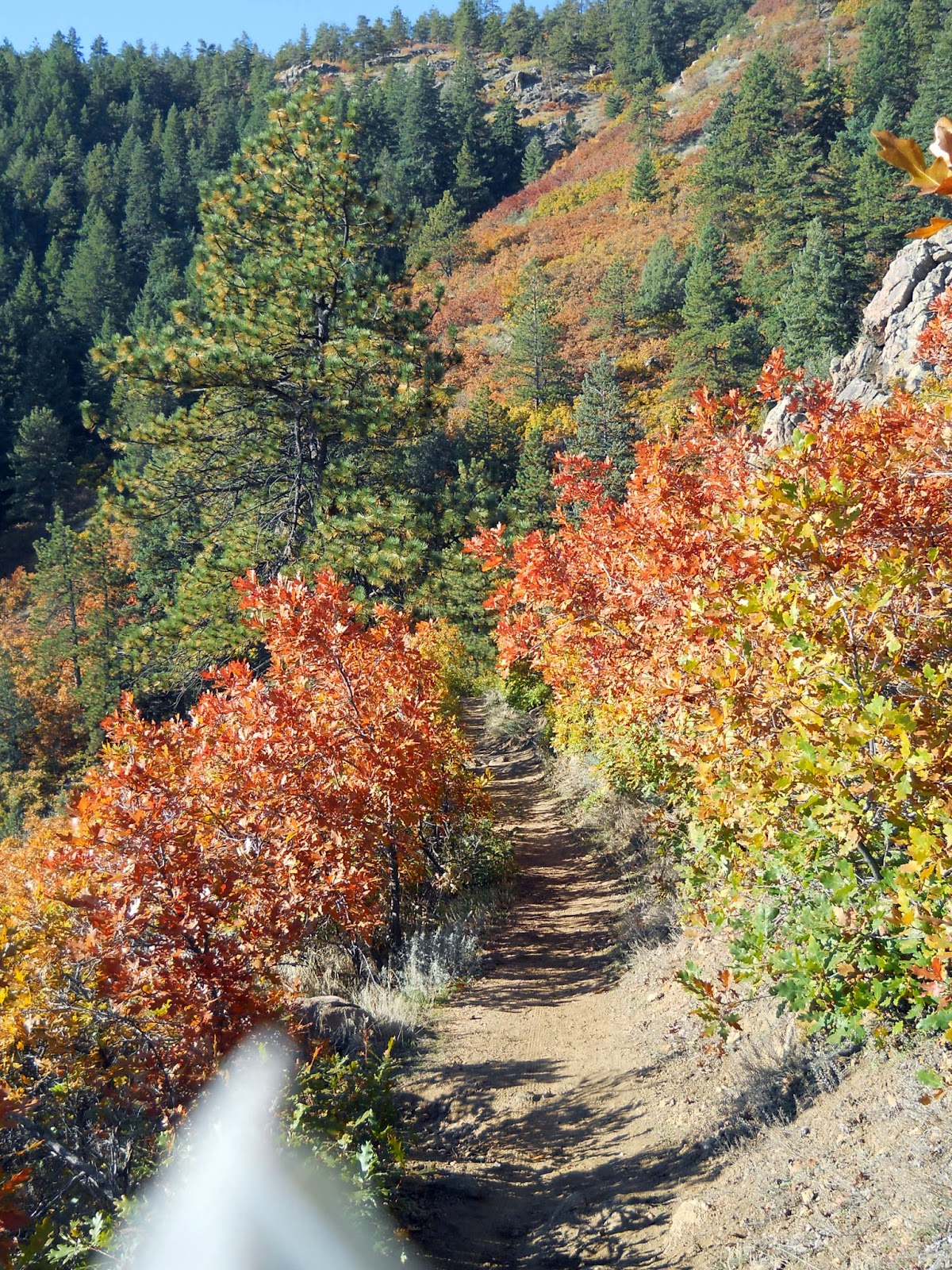 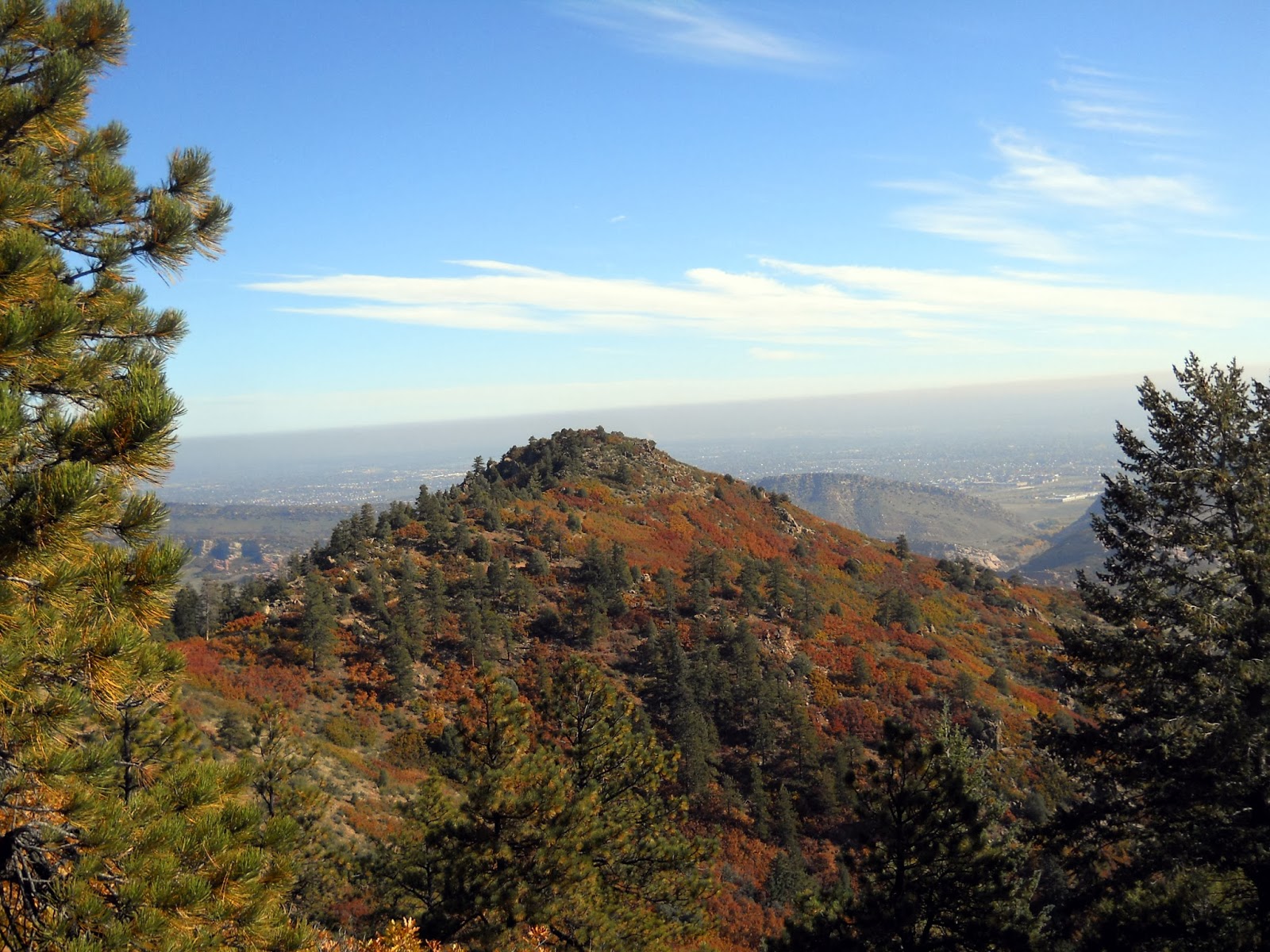 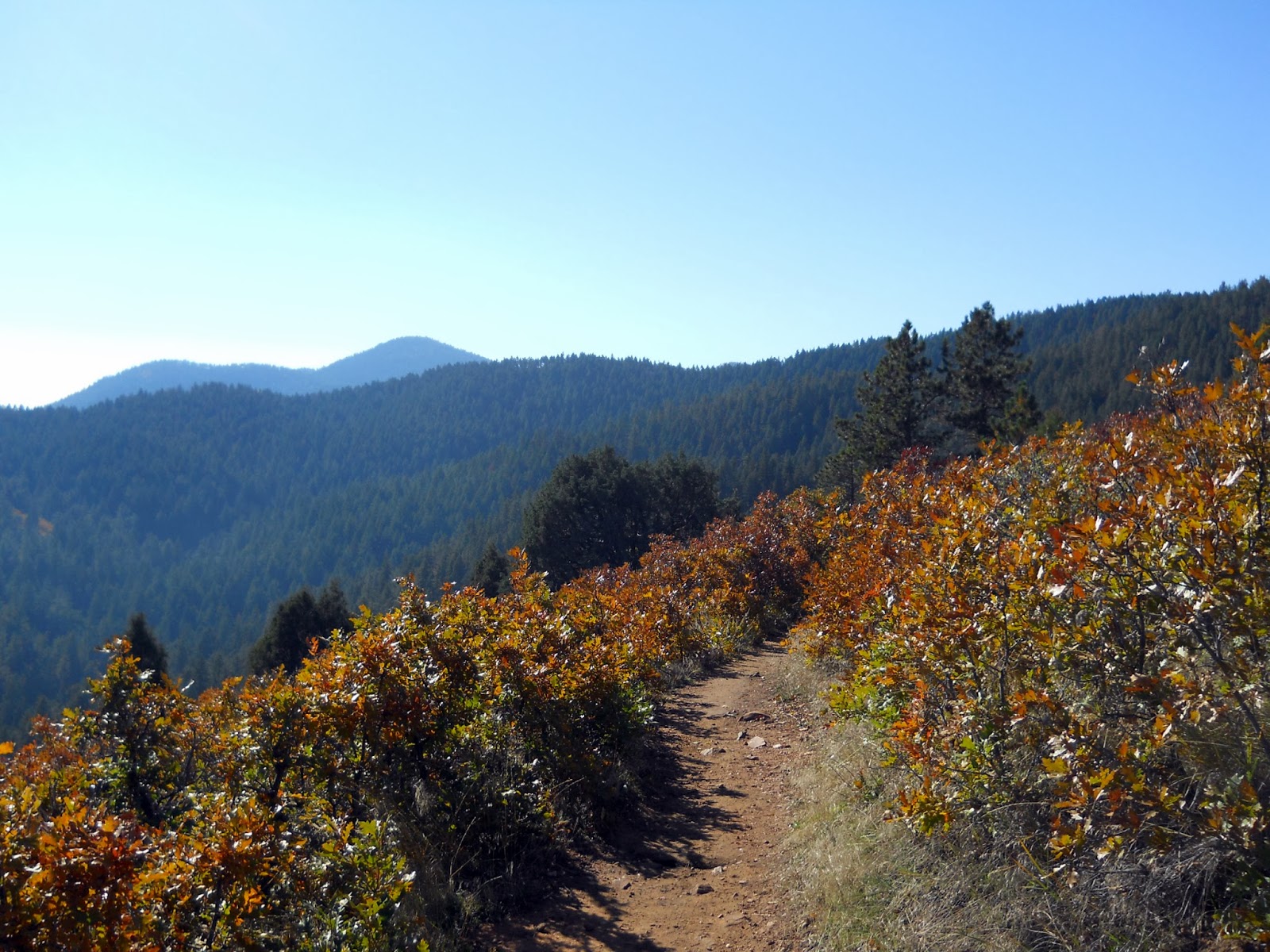 Yesterday, I made my weekly trip up Grays and Torreys. Last week when I ran them, the trail above the big sign was snow packed and slick in spots, but not too bad. This week, it was an entirely different story. From I-70 and up there is now snow. Running up the road to the trailhead was not bad (took me an extra 2 minutes), but from then on it was post holing and breaking trail. Some tracks went up to the big sign, but after that the wind had totally covered the trail with several inches of snow. In many places I was post holing up to me knees and hips. Even up higher it was still a slog breaking trail through several inches to a foot of snow. I ran 10 miles, hiked 3 miles and slid 1 mile. With these conditions it took me 4 hours car to car from Bakersville - +45 minutes slower then in the summer. Now all of that hard work of breaking trail has been covered up with last nights storm. 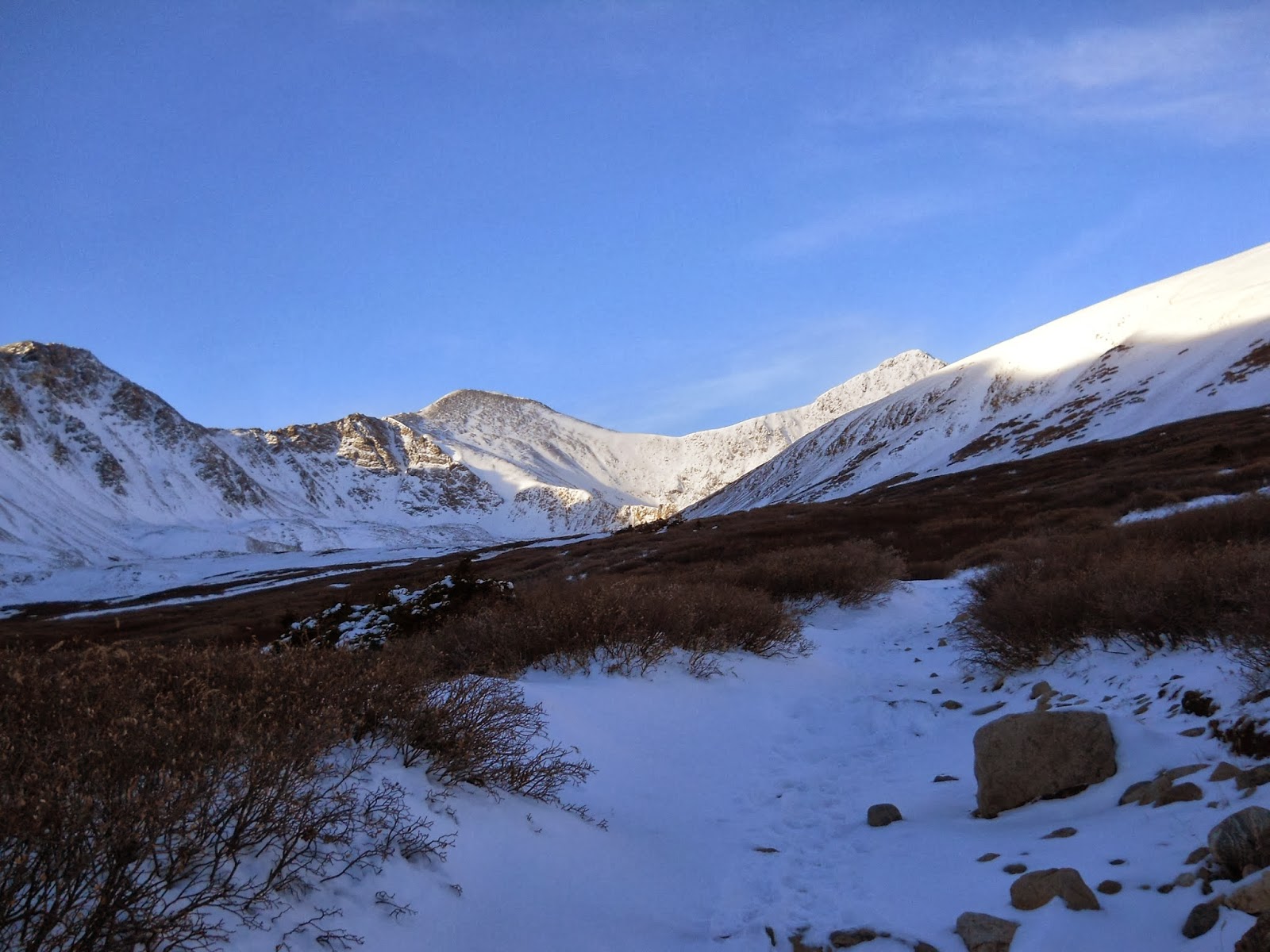 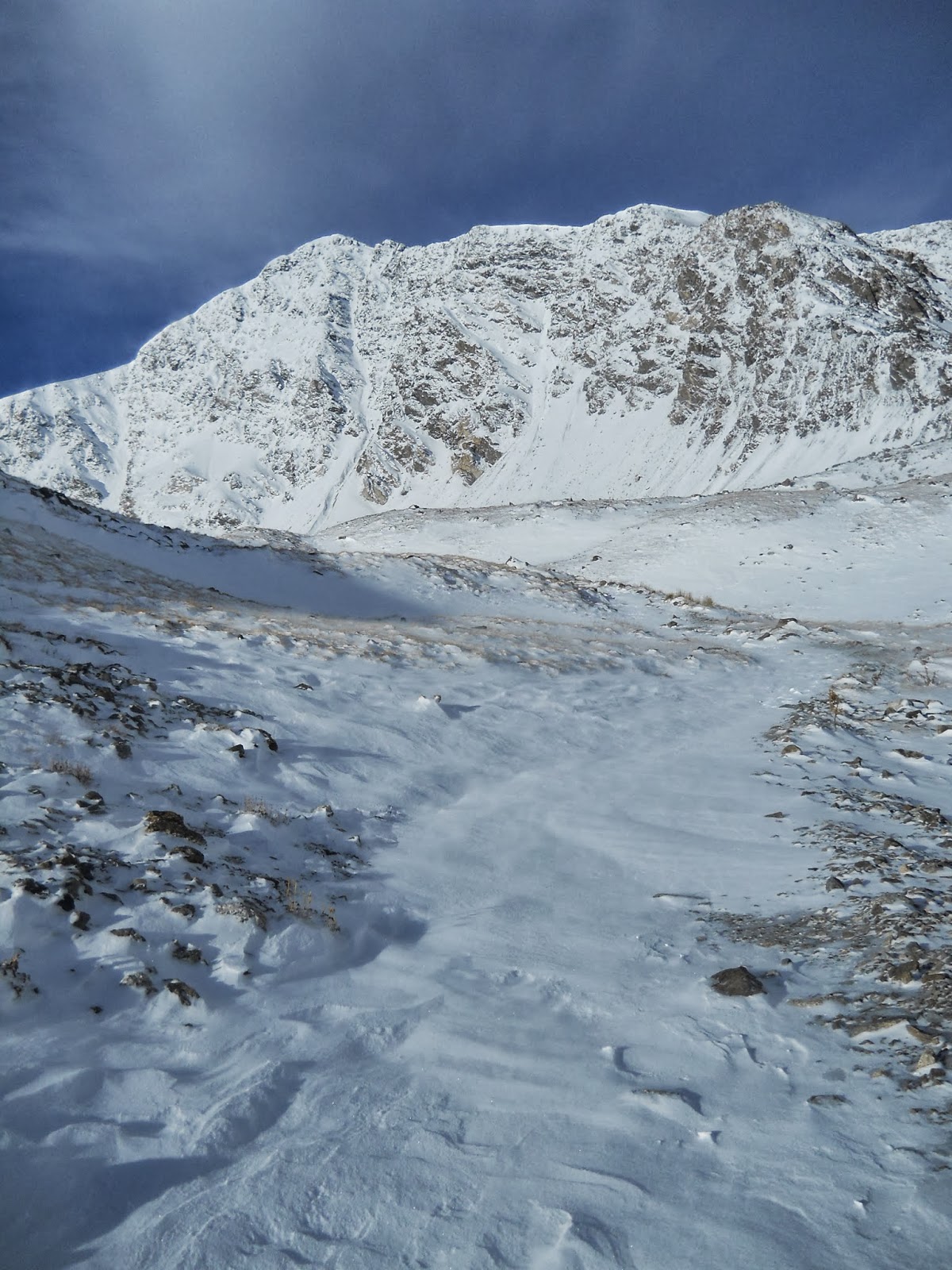 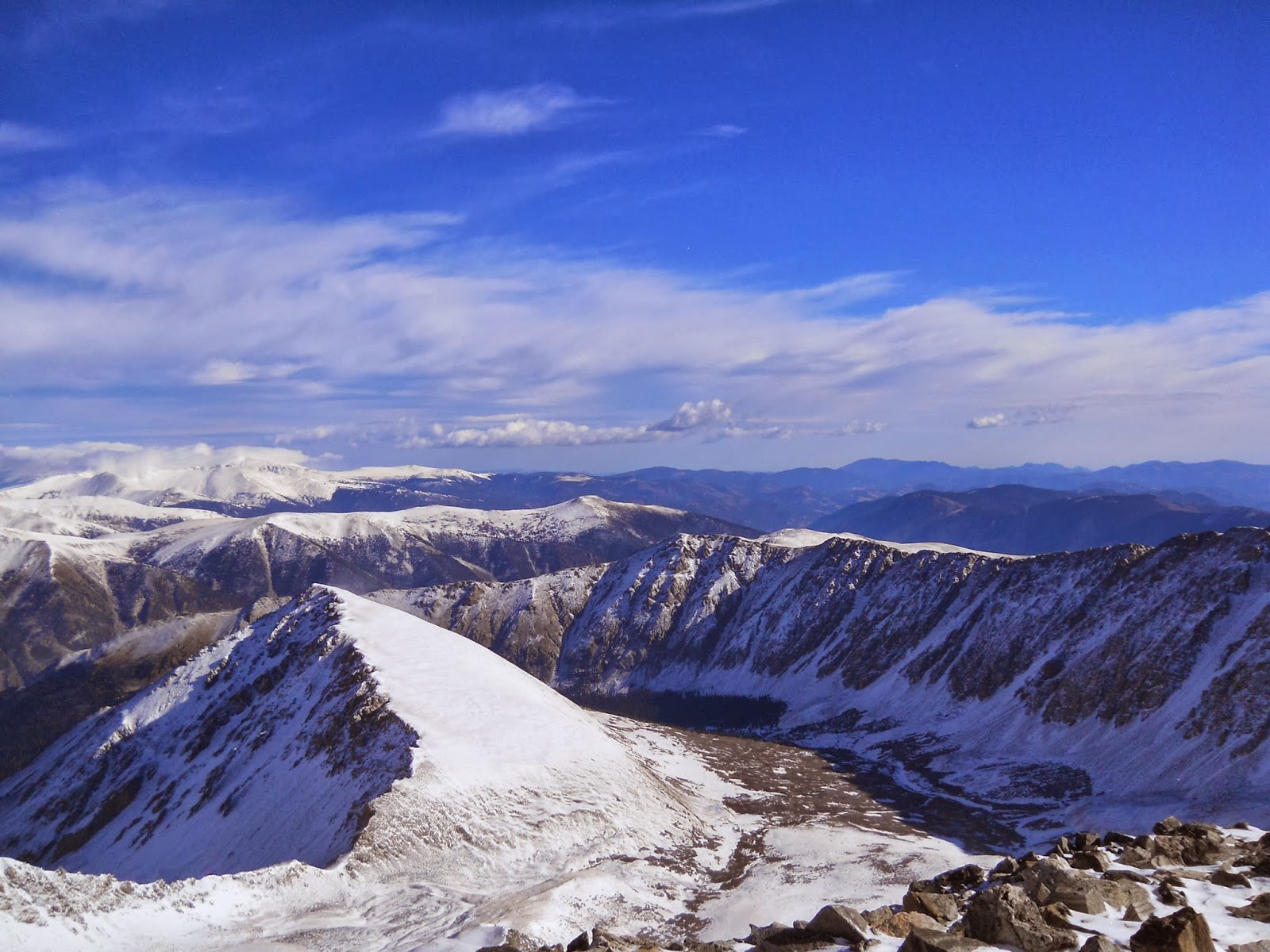 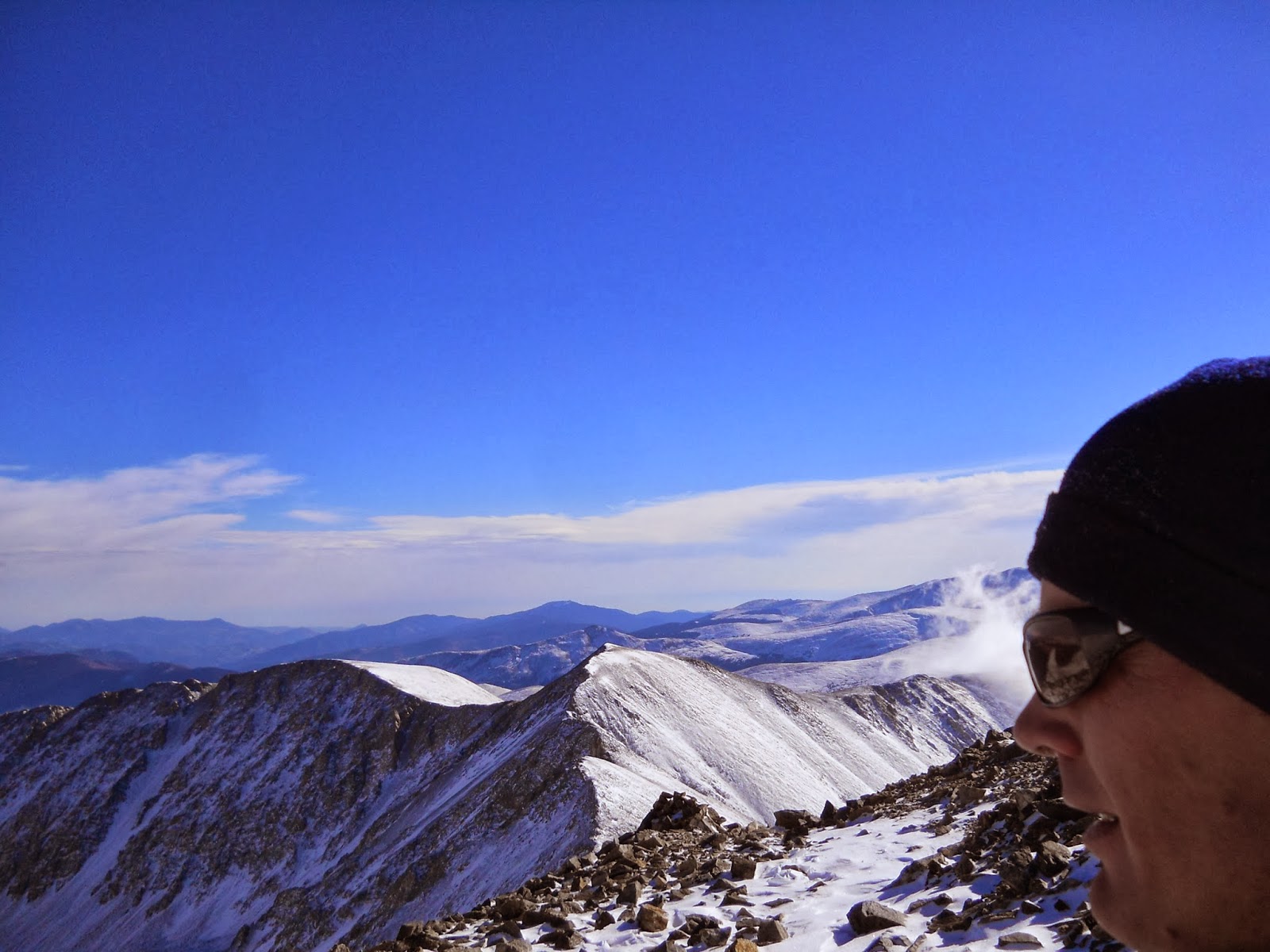 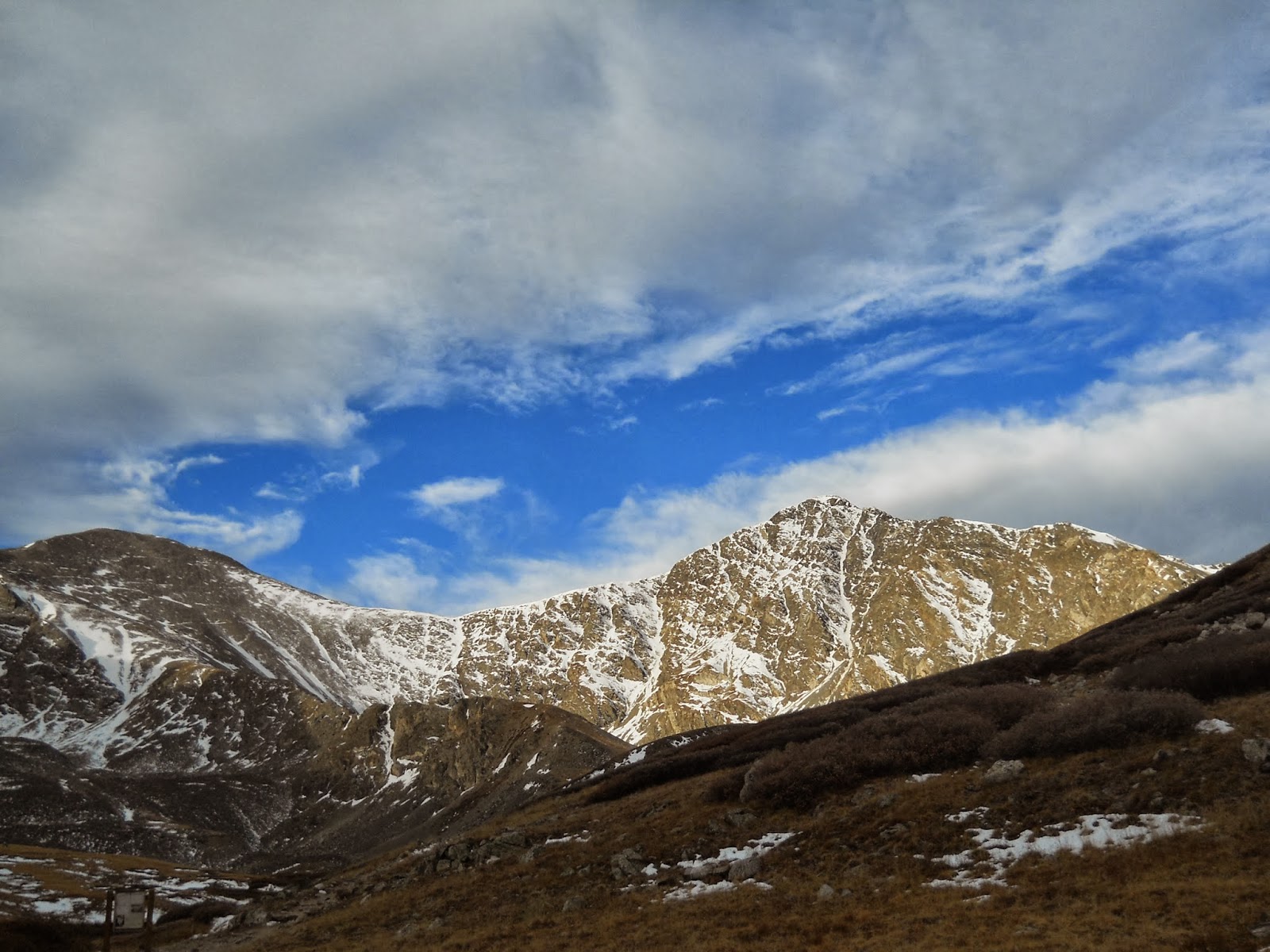 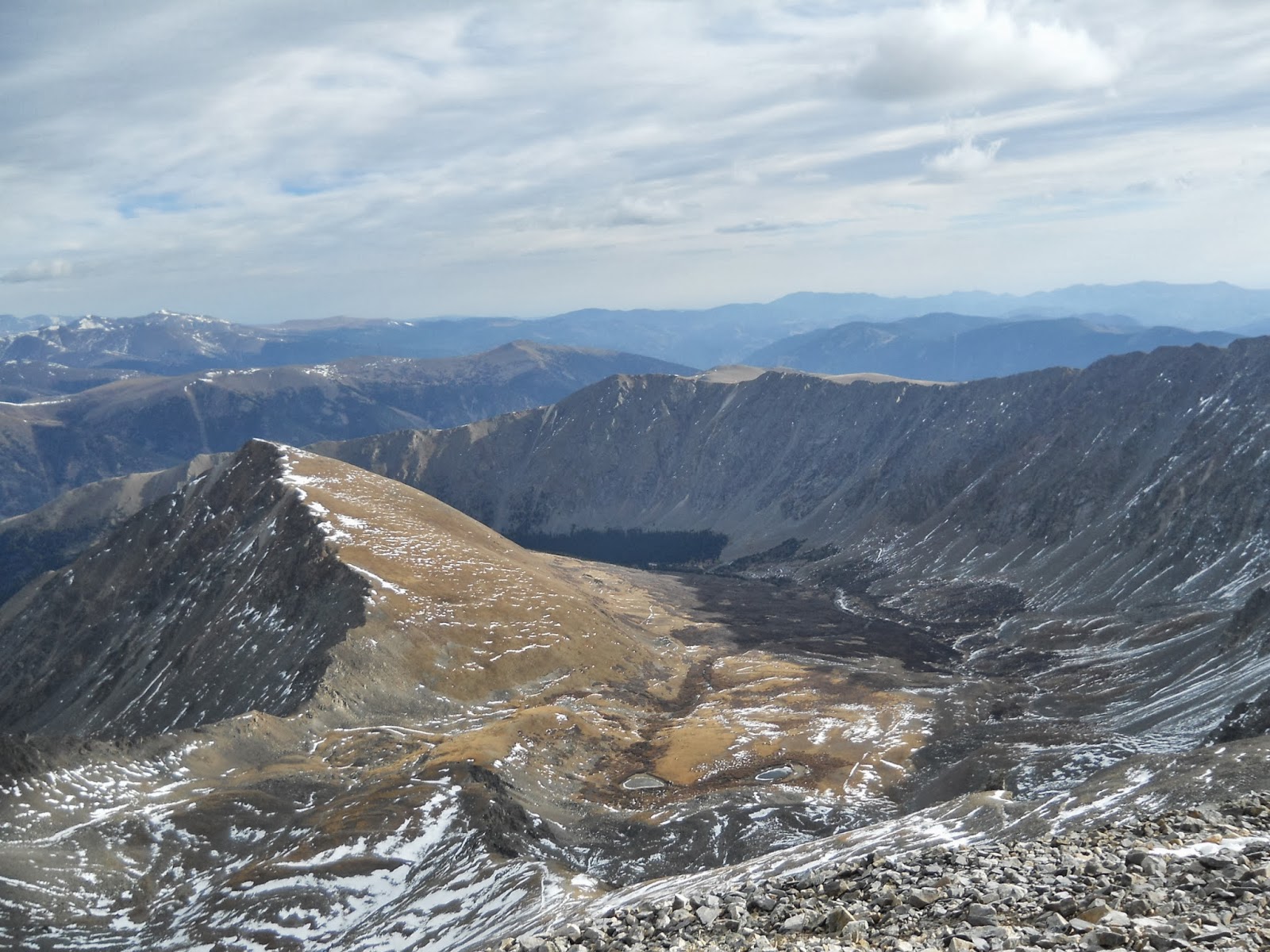 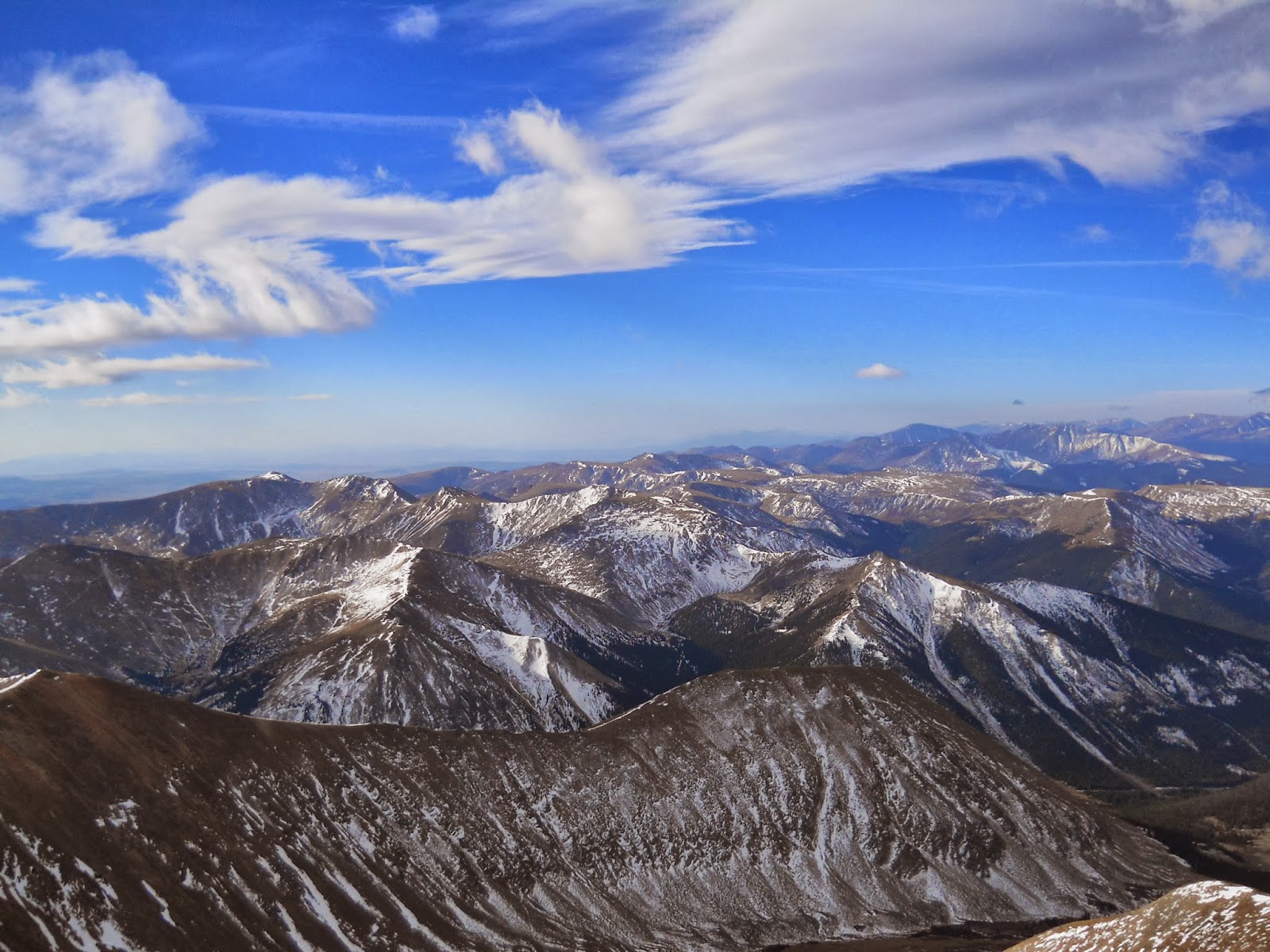 Last minute Tara and I signed up for the final race in the Evergreen Trail Race series - the Fall EverGold 10 miler (actually, about 11 miles). Due to the flooding from a couple weeks ago, they had to move the course to a two lap route in the Alderfer/3 Sister Park outside of Evergreen. With some snow and ice on the trails as a result of Friday's storm, the race started out of the west parking area right at 9:00am. Right away eventual winner and super fast runner Lonnie Cruz took off well ahead of everyone else. There were two other fast guys trailing Lonnie, while a group of four of us were just back in the leading pack. The course was super fun, with fast downhills, steep uphills, and some rolling terrain that gained 1,000' each lap. After the initial downhill and then climb on the Mountain Muhly trail, I was in eighth place struggling to find my rhythm. Since we signed up last minute, I did not tapper and could feel it in my legs fairly quickly as they lacked any pop. My only hope was to hold on and hope that others began to drop, as 10 miles is really short and my focus has been on longer endurance.

The first lap went by fairly quickly, and my position remained the same. After passing by the start again, I started to take it up a notch and initially passed the two other guys who had been just ahead of me. Soon, however, on the following climb I was passed again by one of them while the other seemed to fade. I didn't let the guy get out of my sights, and kept trying to stick right behind him. On the final to last downhill, with less then 2 miles left I really threw down the hammer and blew past the guy, which surprised me as he seemed to be running strong. I really pushed to keep ahead of him over the next section of rolling terrain, and then gave a final push across the flats to the finish line. I was happy to roll in with a time of 1:27, good for 6th place overall. Although I don't stand a chance in these shorter races, I really enjoy them as they push me in ways that longer races don't. The Evergreen series seems to be a real cool series, one that might be fun to do next year if not to use the races as hard tempo runs. 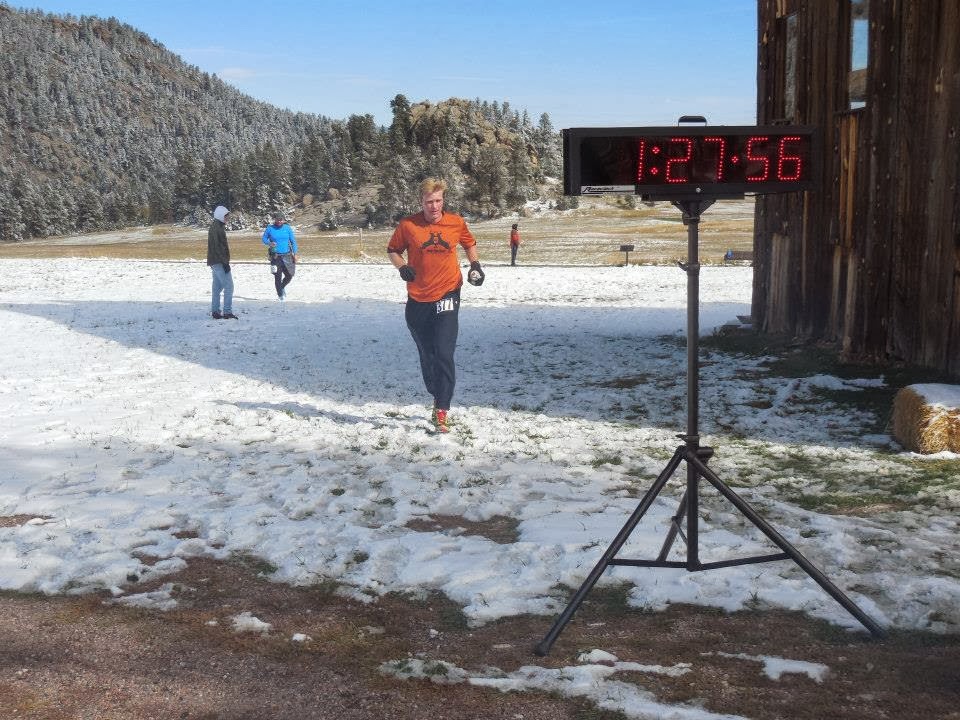 
I was lucky enough to get a couple pairs of Pearl Izumi E-Motion shoes to try out a couple weeks ago. Normally I run in your basic Brooks Adrenaline ASR or trail version, which have a 11mm drop. The Pearl Izumi's come in a couple different drops: the N1 is a zero drop shoe and the N2 has a 4mm drop. Also, the Brooks are what you call a "stability" shoe, while the Pearl Izumi's are "neutral." I've been intrigued by all of the science and discussion behind zero drop shoes (it turns out, zero drop is the original running shoe design, and it was not until Bowerman added a heel wedge did we get shoes with significant drop), as well as the science behind shoe design. It seems that there is no scientific evidence supporting the standard running shoe categories of neutral, stability, and motion control, nor is there any scientific evidence that any of the mechanisms employed in running shoes actually work! (this is coming largely from my reading of Tread Lightly: Form, Footwear, and the Quest for Injury Free Running; I'm only about half through, as well as a lot of the recent science concerning barefoot or minimal shoe running.)

As such, I've wanted to try out some lower drop shoes, as well as shoes that do not have any stability or motion control mechanisms built into them to see what happens. The Pearl Izumi's fit that bill. I've run a fair bit now in the N2 Trails, which have a 4mm drop, a type of "rock plate" and no stability or motion control mechanisms. As such, they are super light, which has been a treat and the first thing I've noticed. Likewise, their arch location is a bit different (slightly back), which took my foot a bit to get used to. However, now that I've run in them a fair bit, and my foot is used to them, I fail to notice any lack of stability or motion control support. In fact, they feel great, and are now my go to shoe. So, have I been running in shoes with extra weight all these years for no real reason? Hard to say. The wear pattern that is emerging seems to indicate that my foot strike does go from outside to inside, but there is also enough wear on the inside to outside of the sole to indicate that my foot strike is pretty neutral. Maybe I was put in some motion control or stability shoes way back in the day when I got my first pair at the BRC; doing the standard treadmill test (which, reading in the book mentioned above appears to be totally unproven and highly inaccurate).

I'm still in the testing phase with this, and have only run in the N1 road shoe a couple times (zero drop, no stability or motion control). However, the N2 with its 4mm drop and lack of stability mechanisms seems to be just fine - and they are light at only 9.9oz! I'll keep testing.

Ran up and over Kelso Mountain via the northeast ridge again, then over and up Grays and Torreys from Bakersville again the other day. Lots of snow, cold wind, etc. Might be the last time I can do this run in my "summer" gear - if this coming storm delivers like they say, it will be full winter conditions next time up. Same as last time: 4:25 rt from Bakersville, 15 miles, 7,300' gain. 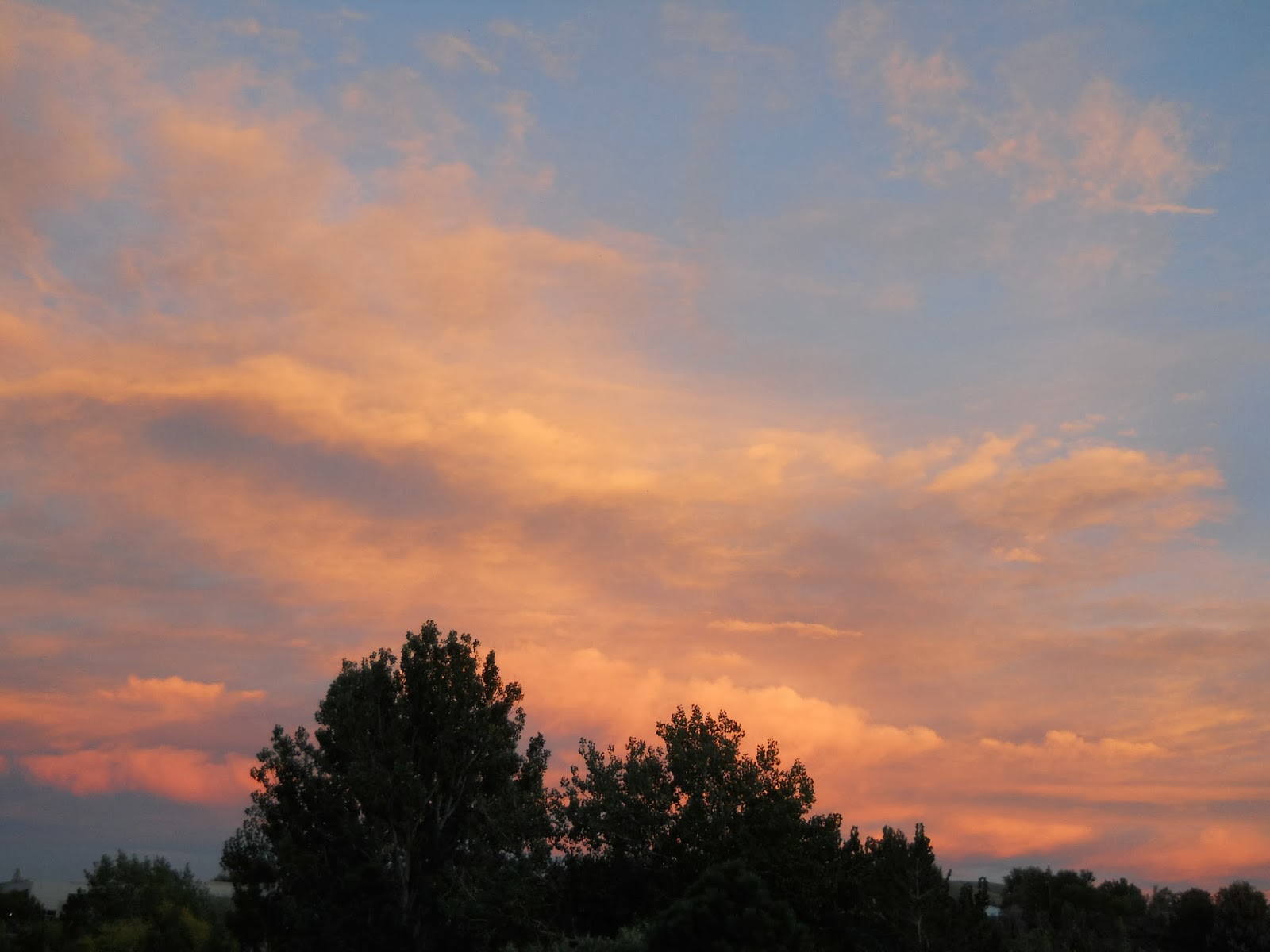 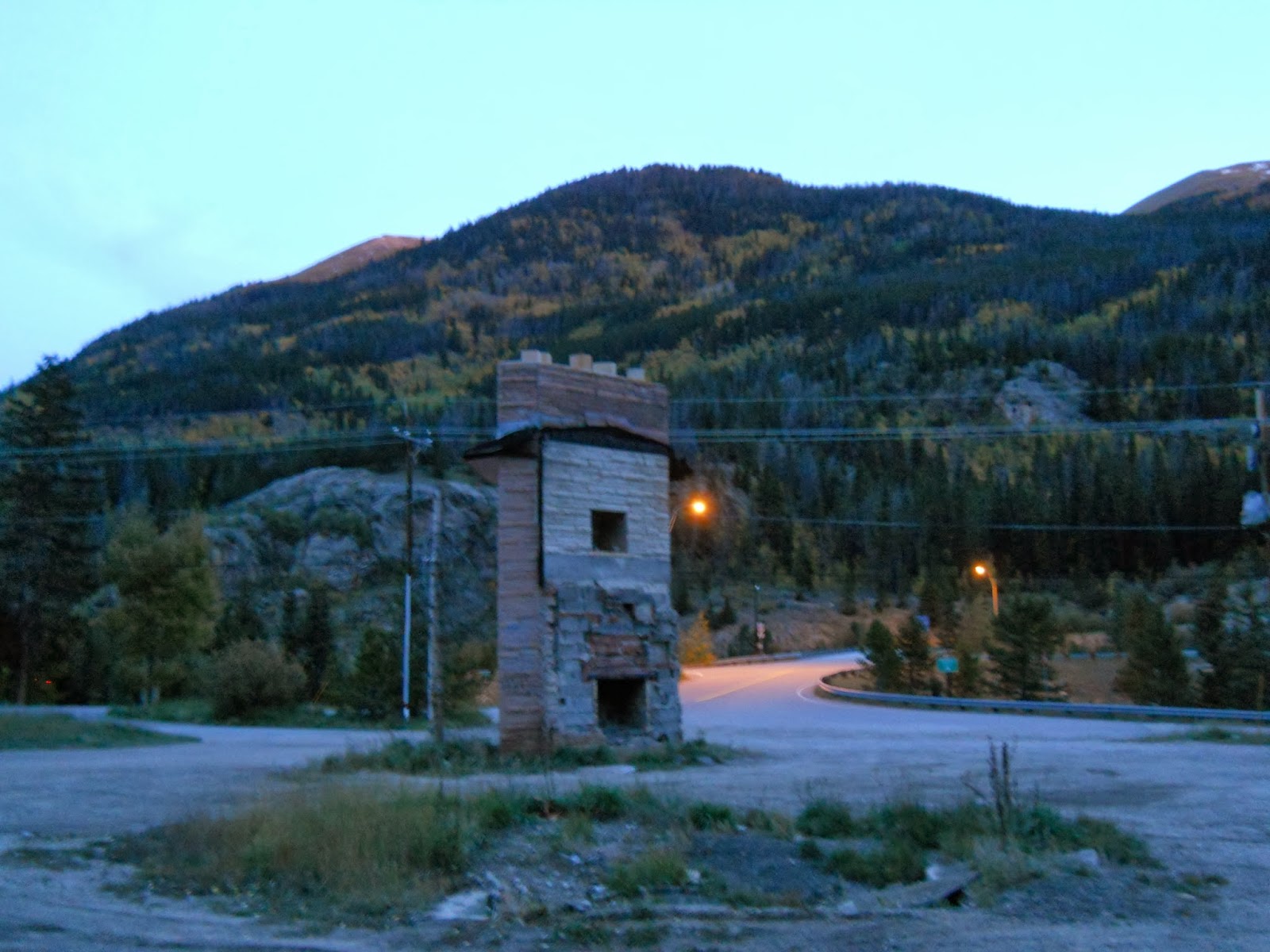 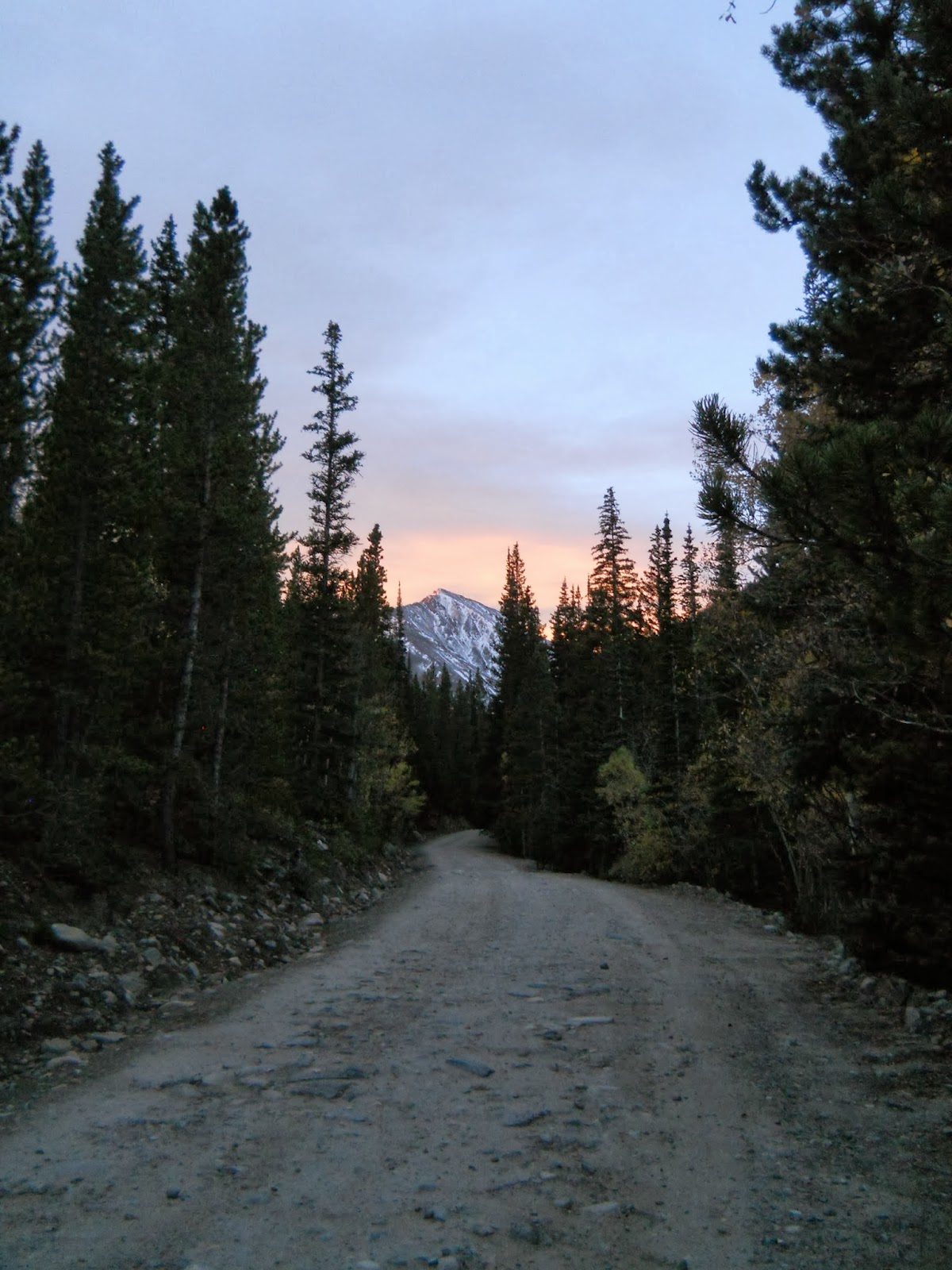 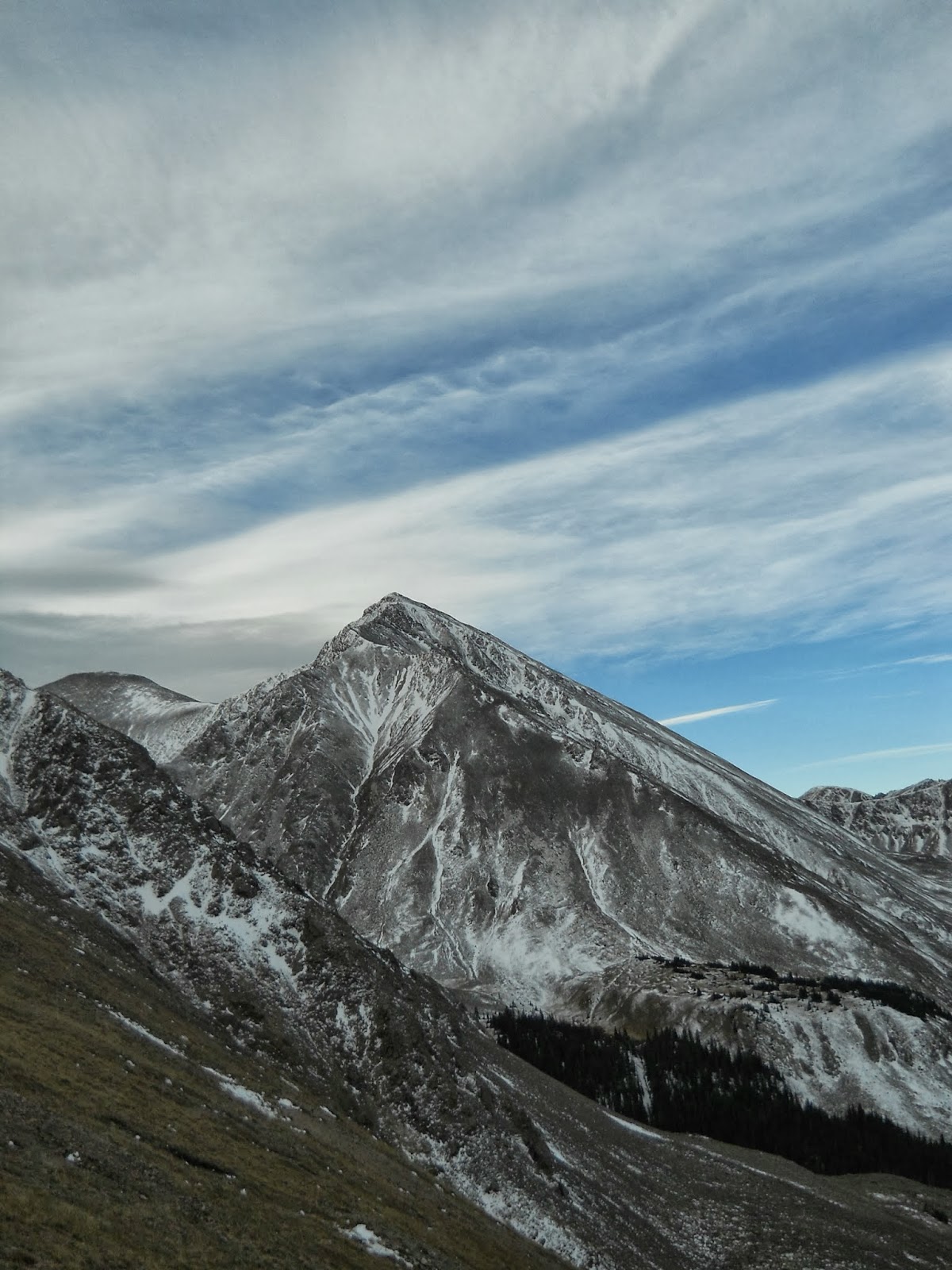 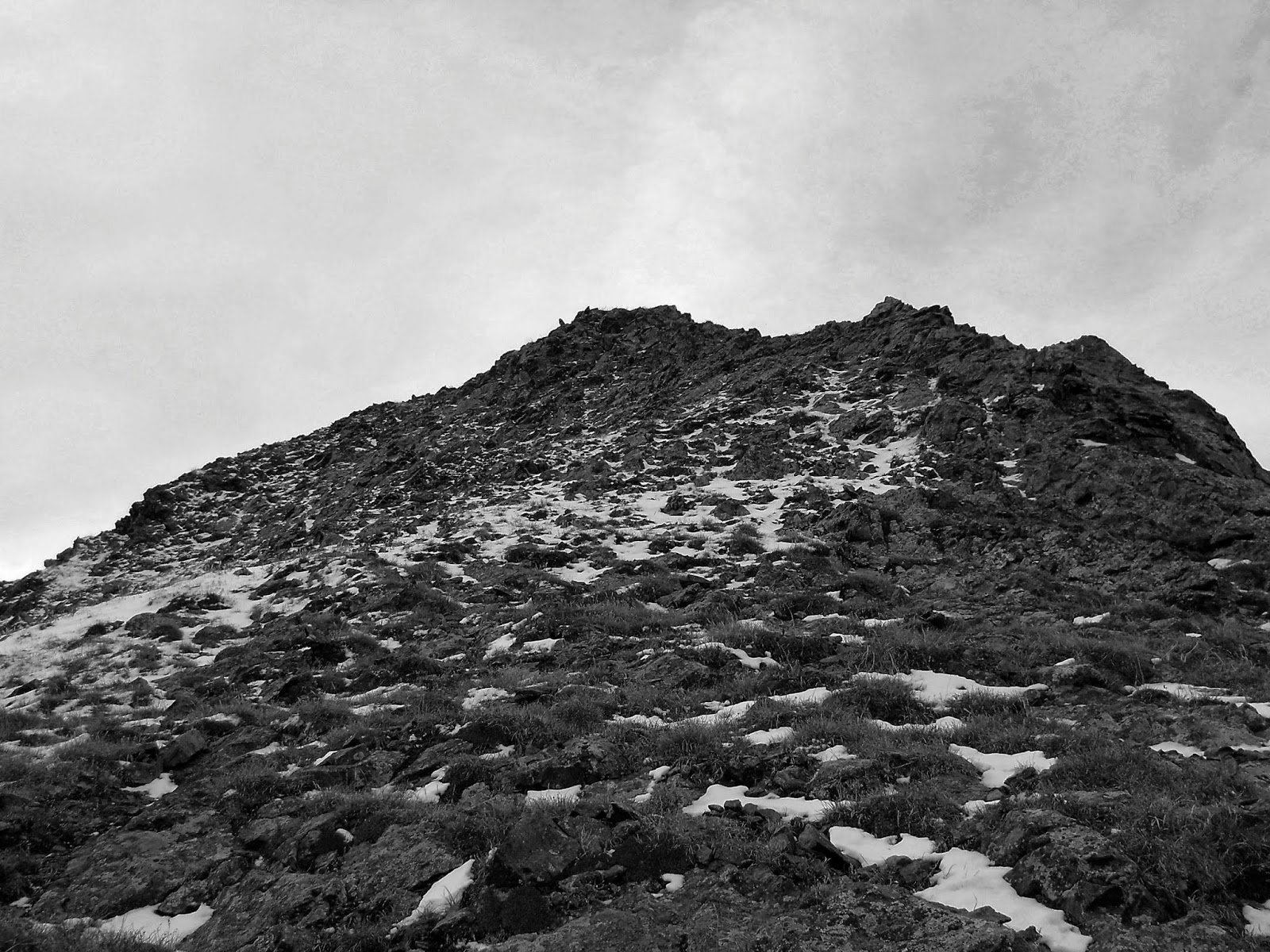 Part of the northeast ridge up Kelso... 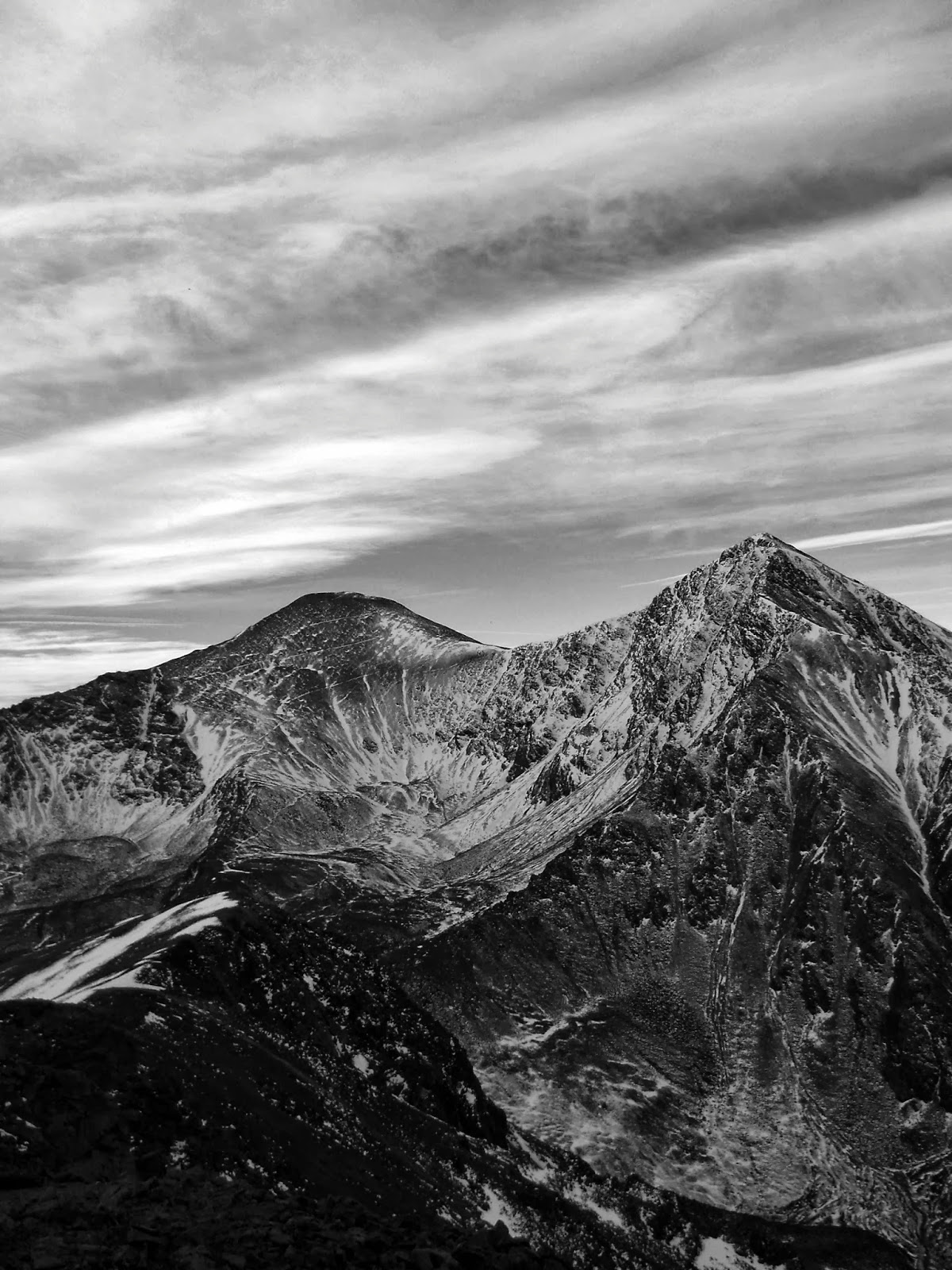 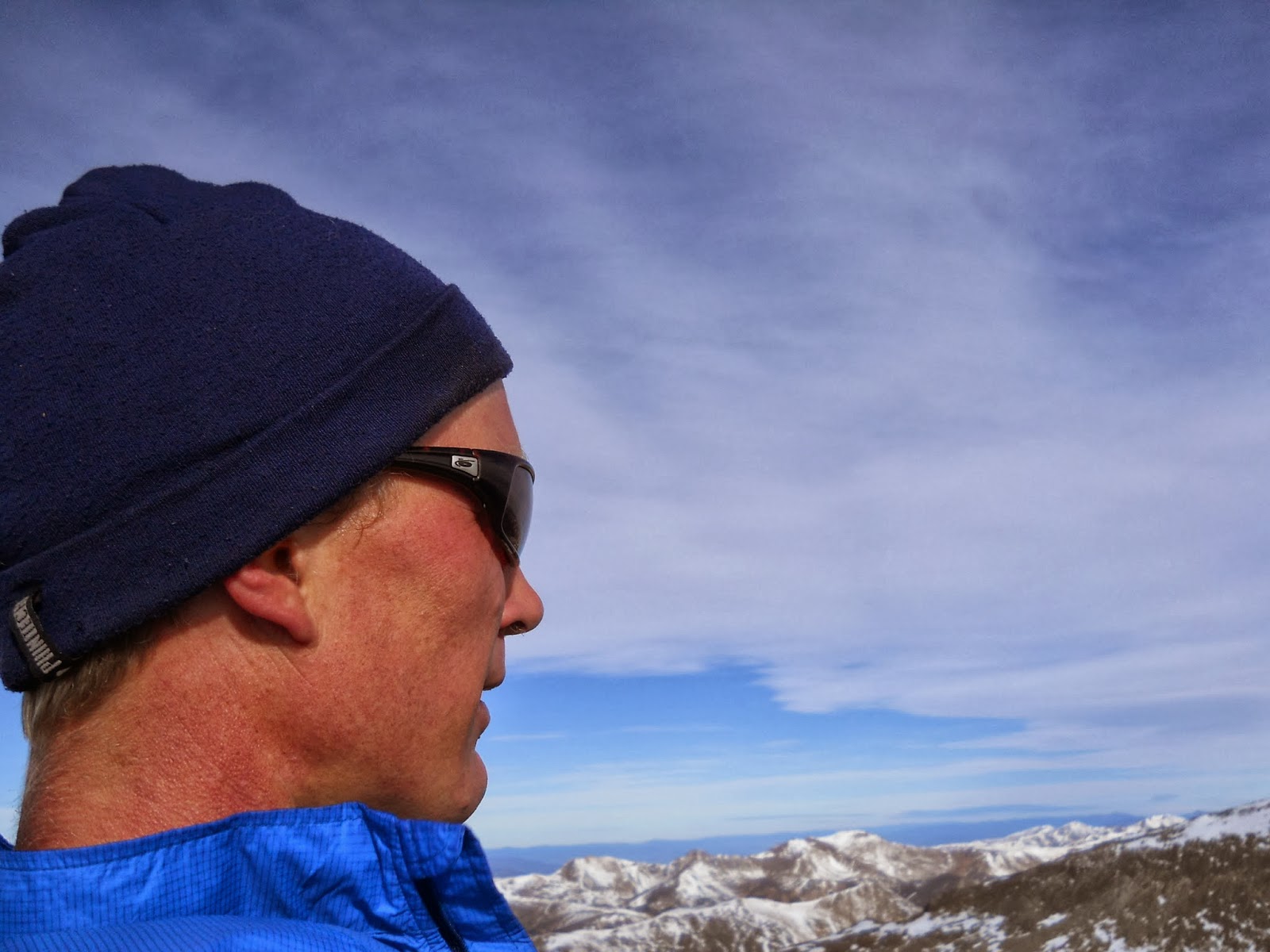 You can tell how windy it was by my red coloring...
No comments: Links to this post