In an attempt to maximize page views, I'm going to drop a bunch of big names. No, not really, but over these last two weeks I've had the honor to write about and hang with some superstars.

I've written now for almost every type of publication. It took me about 5+ years before my academic writing stated to get published. That took a lot of work, research, and effort to figure out how to write in an academic setting. It paid off, however, as I now have publications in journals, books, encyclopedias and the like. About a year ago I started to try my hand at sports journalism, something I knew nothing about. With the help and guidance of Mike Sandrock, Todd Straka, and Brian Metzler, I'm pretty psyched to have finally started to get published in that world. It's been a long journey, and I've had to re-learn the art of writing, but it has been a great challenge and something that I have really enjoyed. I finally capped off that journey last week when two of my articles were published in Competitor - my biggest publication to date in the field of sports journalism. I wrote one article on the start of the Tour de Flatirons by Satan's Minions and another on Andrew Hamilton's amazing summer of 14er records. Thanks for the encouragement and help from everyone along the way! 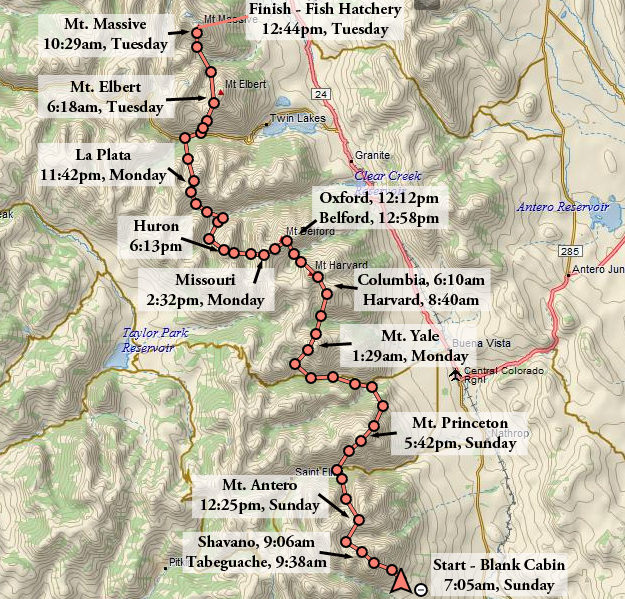 I made the above map for the article, but it was not included. It shows Andrew's splits on his Nolan's 14 run. All on two granola bars, a Subway sandwich, and a ton of powdered drink! 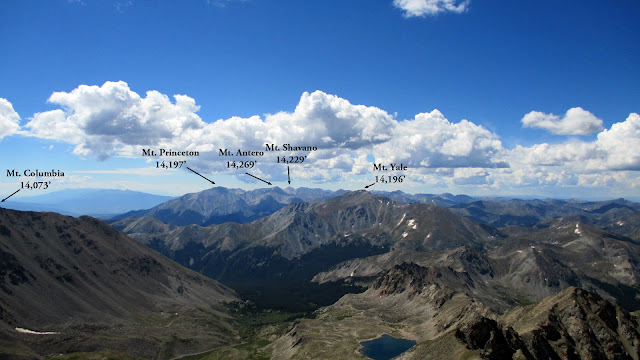 This is a photo I took from the summit of Mt. Harvard, showing the southern half of the Nolan's line. 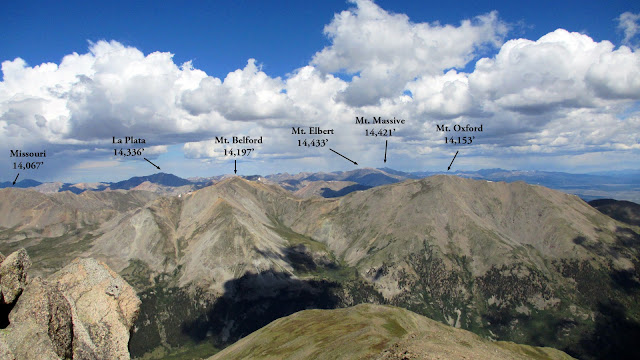 Here is looking north from Mt. Harvard showing the northern half of the line.

Then, last night, after a lot of work on the part of many, many people, the 4th Annual Boulder Sports Hall of Fame Induction Ceremony took place. Again, such an honor to be part of the event and to meet such amazing people. 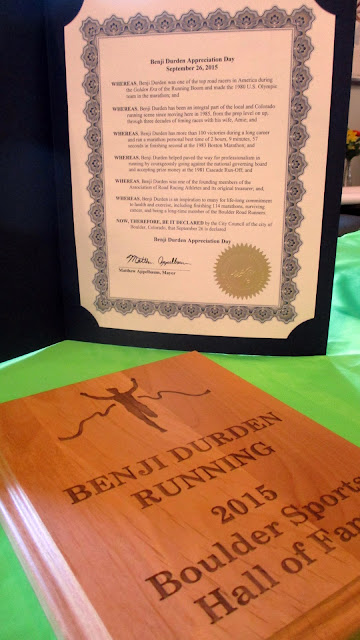 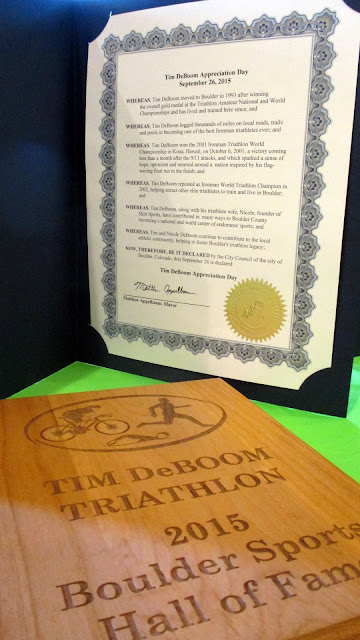 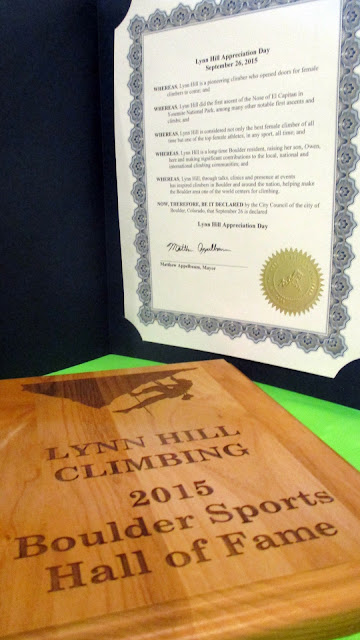 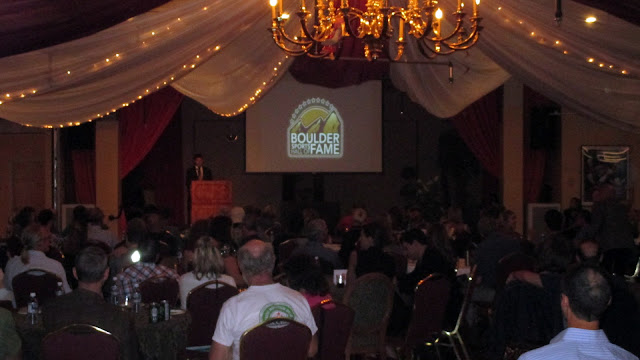 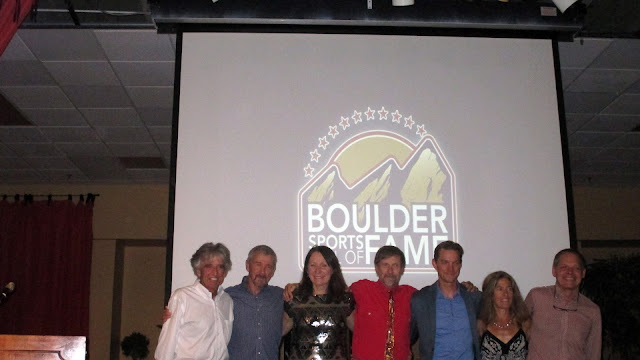 Attending the event last night really put into perspective just how many amazing people call Boulder home. There were probably another dozen Olympians, World Record holders, and the like in the audience. Small fish in a BIG pond indeed! 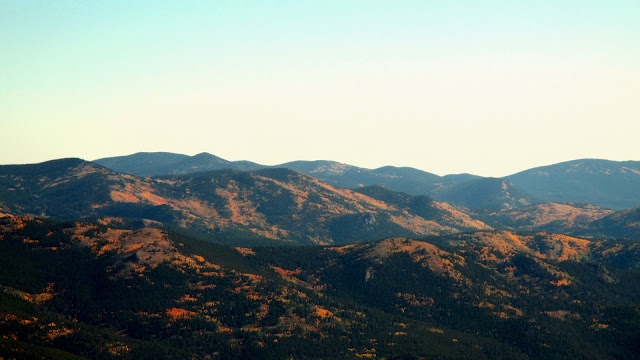 Oh Where Does The Time Go?

Oh Where Does The Time Go?

Lots has happened since my last post. Tara and I moved out of our VW Rabbit after living in it for 3 months and we are now living the American Dream as owners of a condo in Golden. I orchestrated a coup at work and got the owners to back off, which in turn made me an official manager. As a result, my work level increased, but not my pay. My right foot has developed some sort of wonky twinge that has been bothering me for a couple weeks now - it only hurts when I run, not when I power hike. So, if you notice my strava data, it is all power hikes up Mt. Morrison, Bergen Peak, Grays and Torreys and the like. I'm just now able to run again and get back into it. We will see how that goes as the US Skyrunning Championships in Flagstaff are Oct. 2-3 and I'm all ready to go. I am working on another trail running guidebook with Adam Chase and Nancy Hobbs, so that has taken up a bunch of time writing up trails, taking photos, etc. It will be a complementary guidebook to my other one - The Best Front Range Trail Runs - as it will have different trails in it. Together, the two should cover just about every trail along the Front Range from Boulder to Colorado Springs. I continue to try and work on my journalism, writing up some articles here and there for Colorado Runner Magazine, but lately I have been too swamped to get much done. However, the real big deal is that I am in the midst of a project celebrating Boulder runners and Boulder running. It will be a full color magazine/book that will come out this January. If anyone wants to contribute photos, writing, art, poetry, or other items, please reach out to me. I've been reaching out to folks and getting content, etc., but I have not announced it to the world at large yet. It will probably consume most of Oct. and Nov. I was appointed Deputy Director of the Transpersonal Psychology Department at Akamai University, and as a result am now working a ton on revamping the program and sitting on two different Ph.D. committees. Oh, and I'm furiously trying to get into the mountains before the snow comes and the mountain running season ends.

So there it is, a major catch up in only one paragraph! As usual, I'm more frequent on Twitter, Facebook, and Strava, but I do like trying to keep this blog up. Hopefully I'll get some more time and keep it going. 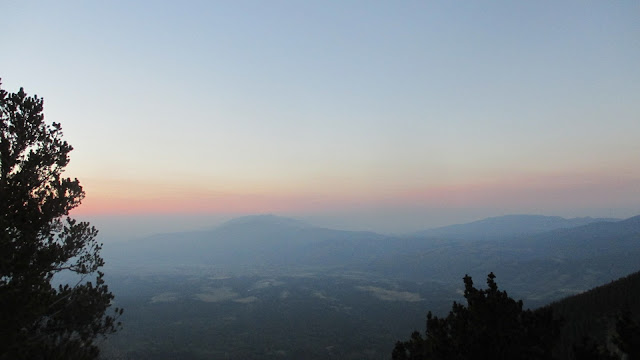 The haze from the western fires on my Nolan's soft attempt. Sadly, I'd develop a weird altitude/asthma thing after four peaks, at which point I had to bail because I could not breath. The haze from the fires has been pretty bad off and on - I'm praying for rain for the folks out west. 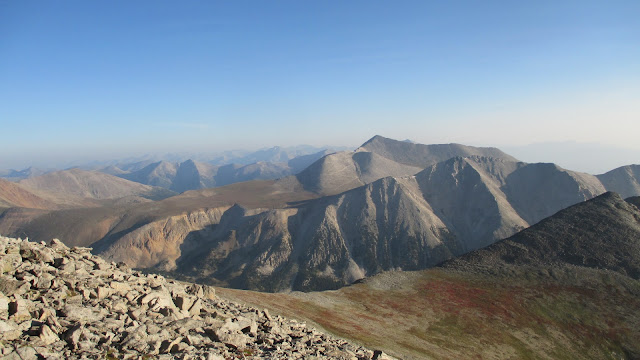 Antero from Tabeguache - pretty straight forward drop from the saddle down to Browns Creek, around the western side of the lake and then straight up. 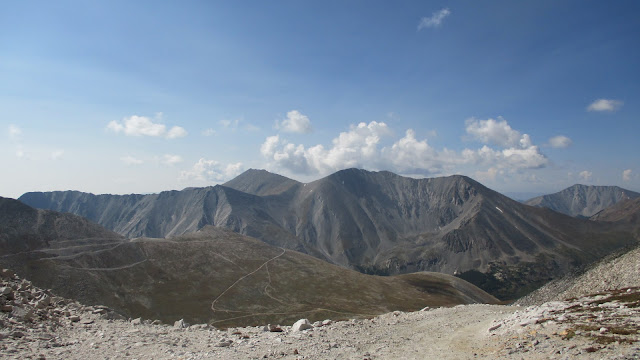 Looking back at Shavano and Tabeguache from near the top of Antero. 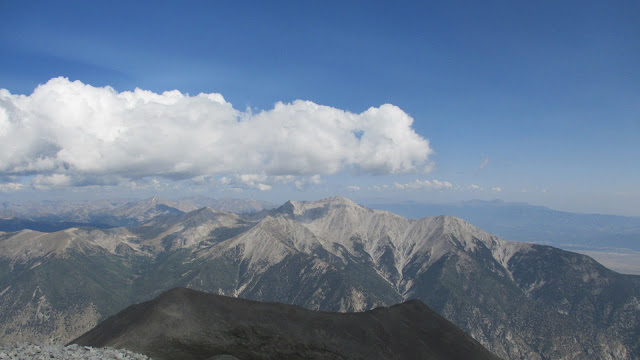 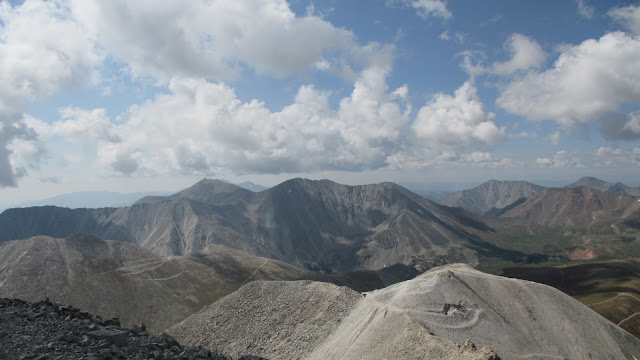 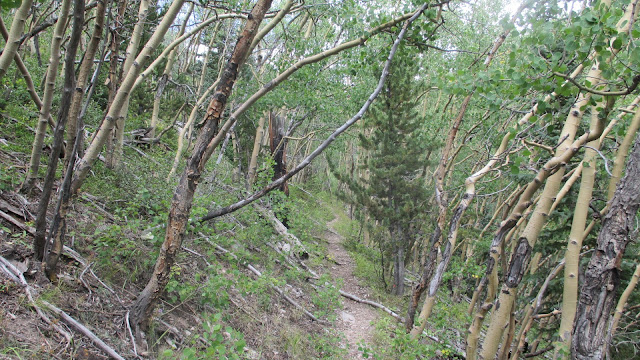 The trail up Grouse. 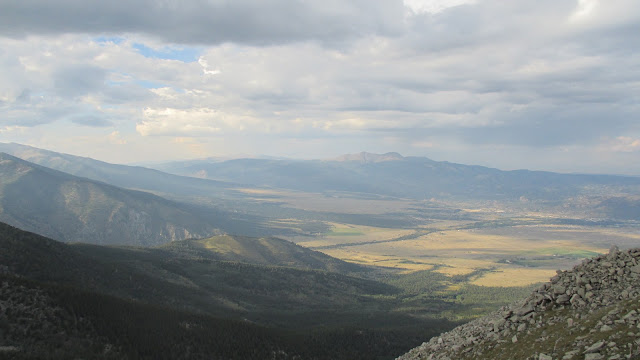 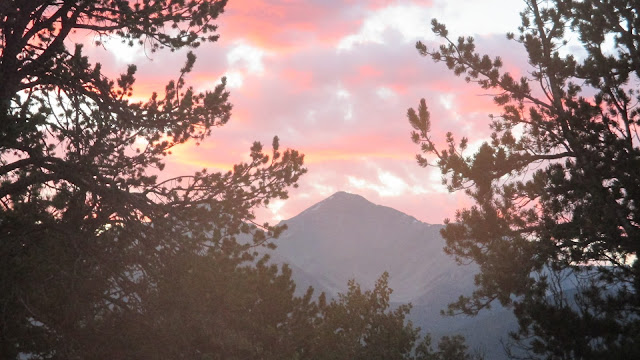 The sunset with all of the haze in the air - and my lungs! 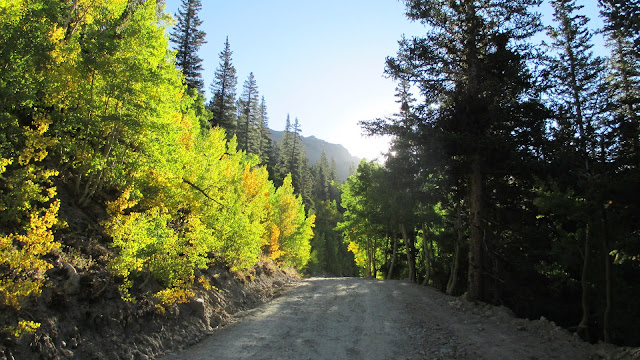 The old familiar - the Stevens Gulch road. I've been getting back into hitting up the Full Kelso route and doing Grays and Torreys. It is such a perfect line - 5,300' of elevation gain all on a nice, dramatic ridge with plenty of class 3. I'm trying to get a good FKT for the line - right now it is 4:01 roundtrip from Bakerville for the Full Kelso and G & T. Certainly can go faster, especially on the descent where I have to go a bit slow due to my wonky ankle. 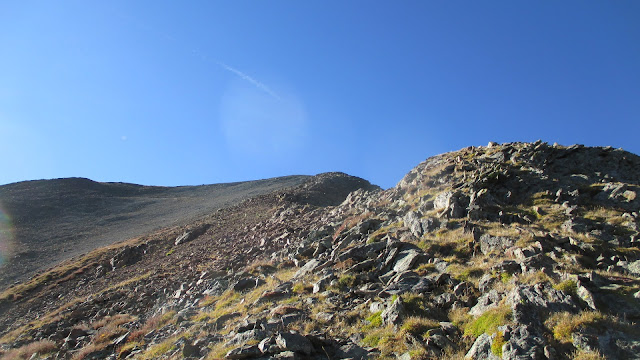 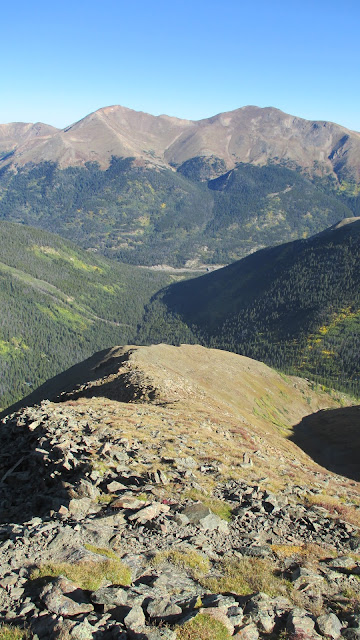 The start of the Full Kelso - just power hike straight up for a vertical K. 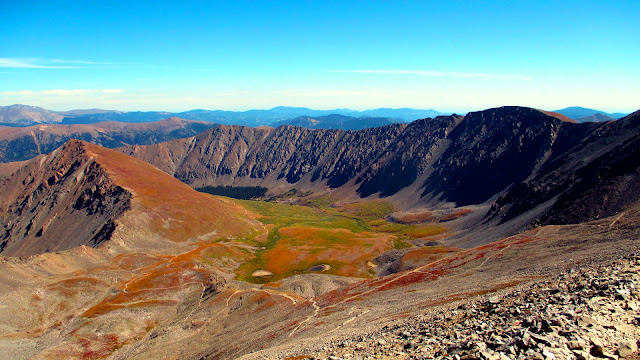 Colors are going off right now up high. 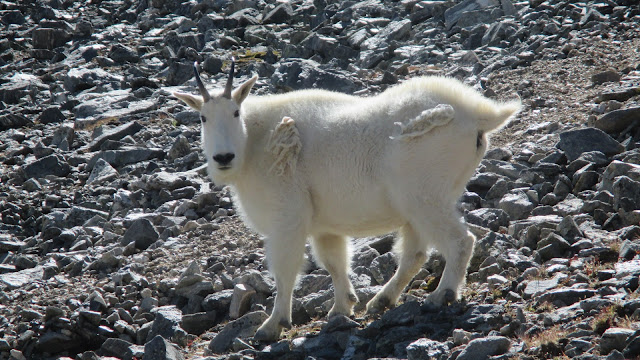 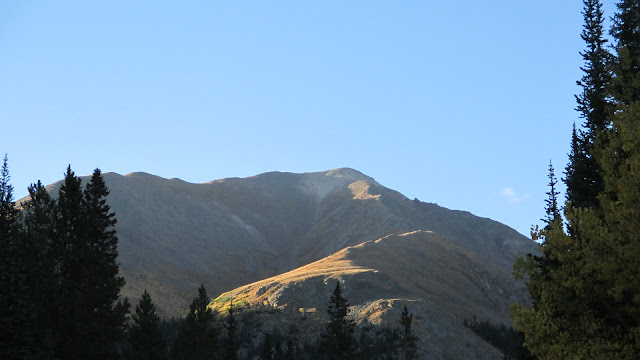 Another go at the Full Kelso FKT - still not happy with my time, but there was snow and ice up high this time, so it will have to wait until next year for a real fast attempt at this point. 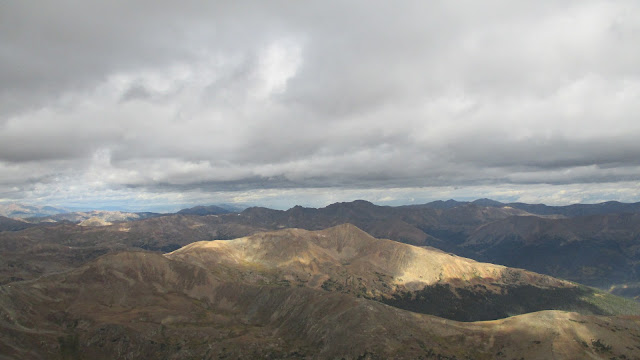 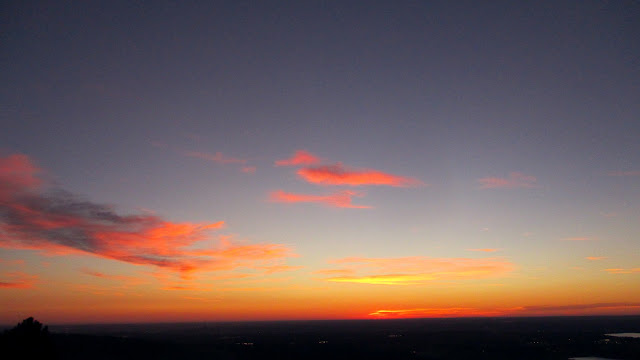 Sunrise laps on Mt. Morrison - always worth it.
No comments: Links to this post