The weather continues to hold here along the Front Range. Yesterday we took advantage of another amazing day and went up to Dinosaur Mountain to try the Avs Wall traverse. This is an excellent wall up on one of the sandstone fins of Dinosaur Mountain. Although there are several great straight-up problems, the real gem of the wall is the entire traverse. 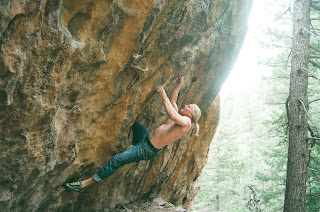 Coming in at around 80 feet long, the traverse has two pumpy sections split by a 10 move long crux. I'm not aware of anyone sending the entire traverse, but I have heard rumors that it goes at around 5.14. But who knows, the middle crux section is extremely crimpy and beta sensitive, and depending on where you place your feet it could be much easier (or harder).

There are many other good problems around. On the way up to the wall, you can always eye Jim Holloway's classic Slap Shot (V12ish ?). Also, up the slope from the wall are several good stand alone boulders in the trees, plus a couple more down and around the corner. 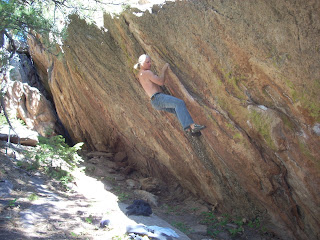 The Avs Wall traverse adds another long, hard sandstone problem to compliment the others found in the Flatirons: The Gutter, The Compound, and The Ghetto. Coming in as the hardest, it also sees the least amount of traffic. Perfect for a solid day of climbing in mid-winter.
2 comments: Links to this post

Although my winter training run is one that I can run from home, sometimes I break it up to get in some bigger hills, or to get in a little altitude. There are two runs I'd like to share today that most people know about, but for some reason fail to think of as good runs: The NCAR Road and Magnolia Road.

The NCAR Road run simply the road that turns from Table Mesa Drive into the NCAR road and takes you up the mesa to NCAR. Straight up, then straight down. This is not a run you would do any other time, but if it is snowy out - or in my case - if it is dark, this run is an excellent option. 1.5 miles one way, I generally do around three laps on it for a session (around 9 miles and a couple hundred feet in elevation gain). You can run along the side of the road on the dirt, which is free of holes, rocks, or anything else allowing you to run at night. The view of Boulder from the top at night is great. I did this several times over December and January when the light was fleeting.

The other great run for winter trail run training is Magnolia Road. At 15.33 miles long, this high mountain dirt road is an excellent one to put in some good miles at altitude during the winter months (note: I would never run this in summer as the road gets dusty and there are many better options once the snow melts out). Tara and I did this last week in reverse, starting from the Peak-to-Peak Highway pull out just past Nederland back along the road until you hit pavement. Then you turn around and make the run back to the car. If you go all the way, you are looking at 30 miles on dirt at 8,000-9,000 feet; not bad for a February training run! Below is a map of the Magnolia Run from Map My Fitness. I never use the site, but it does put out some cool maps for training purposes.

So, if you are in need of some running options in the Boulder area during winter, and the trails are snow covered or it is night, try the NCAR Road or Magnolia Road. They are sure to keep your training strong and on track.
No comments: Links to this post

Local company La Sportiva announced its 2009 running team just recently. Mostly familiar faces and those who are pushing the limits of endurance trail running. Many of them are hometown locals - which is always good. It's good to see La Sportiva continue to support the sport of trail running, which has seen explosive growth since I wrote my original guide book on Front Range alpine trail runs in 2003. All the best to the team in 2009! 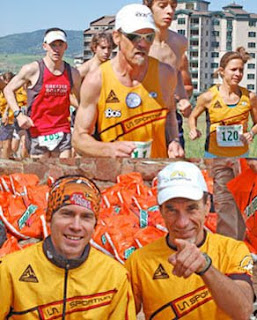 “Developing our Mountain Running® team has been one of La Sportiva’s most effective vehicles for supporting the growth of trail running in North America,” says Buzz Burrell, La Sportiva’s Running Team Manager. “Ever since our team’s inception in 2003, our goal has been to support individual athletes, quality races and to improve the overall vitality of the sport.” La Sportiva’s running team roster includes over 35 athletes from around North America and includes such notables as Karl Meltzer, Michael Selig and Keri Nelson. New additions to the La Sportiva team for 2009 include Jenny Capel, Megan Kimmel, Luke Nelson and Andy Skurka.

Associate sponsors for the La Sportiva running team include Sugoi, Petzl, 1st Endurance and Ultimate Direction. Sugoi’s Marketing Manager Kara Hurry states “For years, hard-core endurance athletes have known Sugoi as making the most incredible, and incredibly hard-working, apparel in endurance sports. Sponsoring the La Sportiva running team is a perfect fit for us, not only because of the high caliber of athletes on their team, but also because of the synergies that exist between our brands and the loyal following of active enthusiasts we both share.” Sugoi will serve as the official apparel sponsor of the La Sportiva team.

“Water is an essential element for peak training, racing and performance,” states Sue Edmiston, Ultimate Direction’s Marketing Manager. “At Ultimate Direction, we sponsor only the most passionate running teams and individual athletes. La Sportiva’s team roster for 2009 includes some of the best endurance athletes in the world. With our innovative array of hydration products we plan to keep them on the move.”

New for 2009, La Sportiva will be partnering with the Pacific Coast Trail Running Series. The Pacific Crest Trail Runs includes a series of 28 races from January to December. There are two remaining races on the calendar for February including the popular Sequoia event in Oakland, California. La Sportiva athlete Caitlin Smith won the overall Series title last year and is off to a strong start again this year, taking the 30km at the Pacifica Race on January 17. La Sportiva also confirmed its role as the title sponsor for the USATF Oregon Mountain Running Series beginning this May. Last year’s inaugural series featured scenic races on Mt. Hood, Mt. Bachelor and Mt. Ashland. In addition to these 4 races the 2009 series adds a steep 2-mile challenge in the Columbia River Gorge and a new up/down format race in Oakridge, OR just East of Eugene.

Go to www.mountainrunning.com for a complete list of the 2009 La Sportiva running team roster, associate sponsors and calendar of racing events.
No comments: Links to this post

Last week Tara and I took advantage of another spectacular Colorado February day and went to an obscure boulder in South Saint Vrain Canyon. The boulder resides in a dry wash in a beautiful setting. Although not necessarily a destination spot for most climbers, the boulder offers a handful of really fun problems, along with some eliminates and traverses. 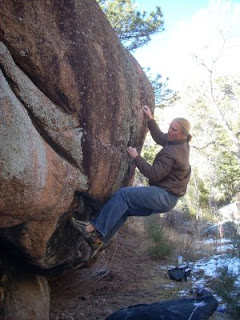 The problems are all in the "average human" range, although there may be potential for one or two really hard problems if any of the local strong men or women decide to throw themselves at it. 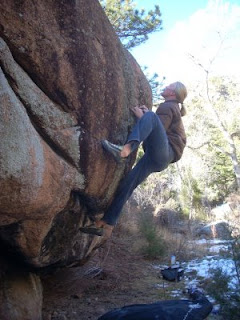 Either way, if you are looking for a good boulder with some interesting problems that sees very little traffic, this just might be the one. The potential for more boulders abounds in the wash, although none are known. Perhaps up the creek a ways will reveal another gem...
No comments: Links to this post

Here is another little telemark video that I think the title says everything. Here along the Front Range we are blessed with the phenomenon known as "upslopes." This is when we get pounded by a good storm and the rest of the state seems to miss the goods. This is from a couple weeks ago, during a classic upslope snow storm.

Sometimes living along the Front Range of Colorado is ok....
2 comments: Links to this post