Last week we had some really sweet weather (as I said in the last post about telemark skiing) here along the Front Range for climbing. On Monday Tara and I went up towards Micky Mouse to visit one of our old favorites. This boulder sits in a beautiful meadow and offers a wide variety of problems - most involving some crimps or high-steps (still can't get the second move to the ultra thin line on the far left of the boulder - but I finally stuck the first move!). On Wednesday, because the weather was holding out and things had melted out a little, we drove up over Flagstaff and checked out the boulders in the Gross area.

Most of the stone and climbing on the Front Range involves sandstone. I love sandstone, its features, and climbing style. However, it is always good to switch it up and get some granite in. The high country is filled with granite and geneiss, but for the last couple months most climbing has been on sandstone. Up at Gross, which lies on the backside of the Front Range sandstone uplift, sits an uplift of granite. And many fine boulders can be found in the trees or woods. 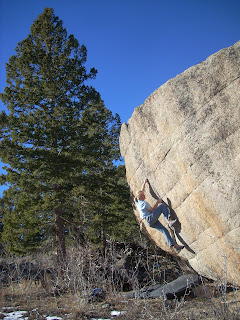 The day was perfect, the sun was shining, and like a lot of Colorado winter days, against the rock it was reaching 60 degrees (the shady side had snow and stayed a cool 30). The stone up at Gross is excellent. Fun stuff, although mostly old-school in terms of climbing styles or bouldering styles these days. No big roofs or caves or talus fields to work your way out of - just fun crimpy lines. 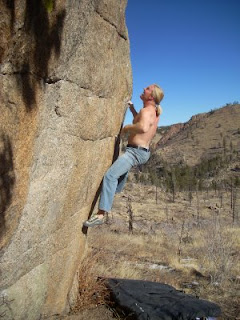 After a week of really hot weather for Colorado (Denver hit 71 in January!), Ullr the snow god is back. And none too soon. Things were starting to seem a little weird. When you have a spell like last week (where I did more climbing then skiing), you have to really wonder just how close we are to experiencing some of the erratic weather associated with global climate change scientists (and avid outdoors people) have been talking about for years.

However, like I said, Ullr has graced the Rocky Mountains with another visit. Once again we are sitting pretty, the snow is falling cold and crisp, and things are looking up. Of course the avalanche danger is super high right now, so there will be no backcountry for a couple days or so (except perhaps some secret tree lines). Therefore, to help everyone get through the work week blues, Tara and I put together this little telemark video.

If you are feeling trapped at work, or just itching to get outside but can't because of that afternoon meeting, I hope this will cheer you up and get you ready to put your skins on. Keep the snow coming!
No comments: Links to this post

Let's talk secret bouldering areas for a second. After word got out back in the 90s about Rocky Mountain National Park bouldering - Chaos Canyon, Upper Chaos, Moraine Park boulders, the boulders at the bottom of the Diamond and down valley, Upper Thunder Basin, Emerald Lake boulders, and others - traffic in the Park really started to pick up. Now, if you go up there on a weekend, you might as well just go to the gym as there are on average 50+ people climbing in the Chaos Canyon area alone.

Groups of industrious boulderers began to hunt out other high alpine bouldering areas in the hopes of finding more gems, classic lines, and a break from the crowds and hot summer temps. Evans - although already known - became another Front Range favorite as it has more moderate problems and landings then the Park. Guanella Pass also got a second or third look. Swissco was found and developed, although the long 4x4 road has kept it fairly quiet despite it having some major undone roof problems. A couple other places were also found and developed: the Eldora walls, Empire boulders, Cameron Pass, and the Keystone boulders.

The Keystone boulders are one of those gems that seems to be holding out from massive amounts of Front Range traffic. Situated at 10,000 feet, they offer a unique opportunity to boulder in a forested slope and fairly cool environment for those hot summer days. Many lines remain undone, some have already been sent, and a few still need to be found. So, although they are buried under a few feet of snow right now, here are a few pictures from last summer to entice you... 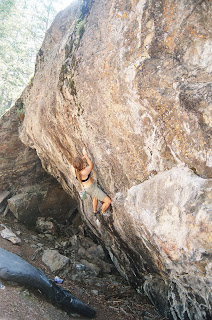 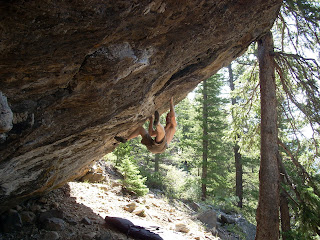 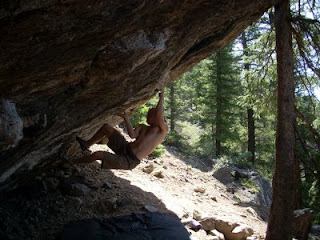 Late one night while under the influence of Round Midnight vibes, the plans were hatched. Our friend had a condo reserved, and there was plenty of room on the floor for people to crash. The time was right. Wolf Creek it was.

Leaving early Monday morning, things were going smoothly. The roads were clear, Summit County was dry, and views of the San Luis Valley kept us driving. News was that the Pineapple Express had been pounding the Wolf once again - even though there was no snow in northern Colorado for the past couple days.

As we drove over Poncha Pass, I knew things were going to be different. There was a ton of snow in the Valley - a rare occurrence. Once we past South Fork, the sky clouded over and it started to snow. It was full on blizzard conditions at the top of the pass. We knew the next day was going to be good. Turns out, it was better then good, it was just what the doctor ordered.

The next day, we had a classic Colorado day - bluebird sky, no to little wind, epic powder conditions, and only a few Texans and Okies to avoid.

Hard to film on such a day. Over 40 inches had fallen in the last two days. Who wants to pull out a camera and wait around when it is waist deep and there are just lines calling your name? We didn't either. Most of the footage is from day two and three - sloppy seconds but all the same, well worth the trip.

For other telemark ski videos from this season, check out:

Another Long Telemark Run: Skiing Up and Down

Dean Karnazes is Winner of the Four Deserts: Running in Chile, China, Egypt, and Antarctica

Last spring I had the pleasure of meeting Dean Karnazes when he was on his 50 marathons, in all 50 states, in 50 consecutive days. After completing that, you can bet that when Dean Karnazes says he’s going to the desert, he’s not talking poolside in Palm Springs.

Karnazes, a 1981 graduate of San Clemente High now living in San Francisco, set out this year to run 1,000 kilometers across some of the hottest, coldest, driest and windiest places on Earth. 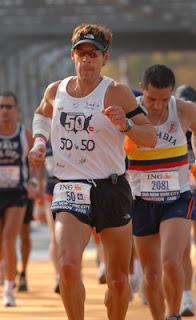 Known worldwide as the Ultramarathon Man, Dean Karnazes was declared the winner of a worldwide event dubbed The 4 Deserts. The "race" is an annual series of 250-kilometer races, each spread over six days, in stages. This year’s runners crossed the Atacama Desert in Chile, the Gobi in China, the Sahara in Egypt and what race organizers termed The Last Desert, Antarctica.

“The highlight,” Karnazes said, “was stepping off the boat in Argentina, safe. On the passage home (from Antarctica) we got stuck in hurricane-strength winds and a horrible storm. It was hairy. The boat right behind us ran aground and didn’t make it back.”

The weather for the six-day Antarctic race had started out nice enough, but it turned so nasty that the organizers, Racing the Planet, Ltd., had to cancel the final two days. 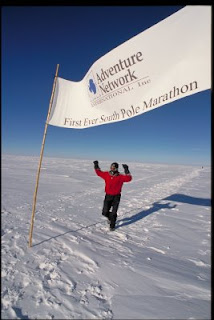 This wasn’t Karnazes’ first time in Antarctica. In 2002 he won the South Pole Marathon, a 26-mile race in -40 temperatures.

How was this month’s race different? “We were on the coastline this time, and there was actually life,” Karnazes said. “At the South Pole, there’s nothing alive. (Here) I was interacting with penguins that were incredibly curious, almost like cats. They come right up to you. I finished one of the stages, and I’d be sitting there and they’d be surrounding you. They have no natural predators, so they’re not intimidated.”

Karnazes, 46, found the 4 Deserts series more demanding than he had expected. For each day’s race, competitors had to carry everything they might need in a backpack. “It was pretty raw,” Karnazes said. “In the Sahara I thought, if you go down here, it could be three or four hours before someone comes upon you. It got up to about 112 or 113 on one of the days.”

Karnazes won the first race, in Chile. Crossing the Gobi, in China, on the border of Tibet, he ran into inquisitive kids. “It was some of their first exposures to westerners,” he said, “and here we were running through their villages.”

Arriving in the Sahara, Karnazes had heard about singing sand dunes and got to experience them. “It sounds like angels singing off in the distance,” he said. “You’re out there by your lonesome. It’s eerie, but kind of magical in a way. Finishing next to the pyramids was tremendous.”

Karnazes and Paul Lieberberg from South Africa were the first to complete all four events in the same year. Learn more at Racing the Planet.
No comments: Links to this post

The Upper PB Boulders: Stellar Stone in the Colorado Flatirons

Today Tara and I hiked our way up into the upper Flatirons in search of some secluded bouldering. The Flatirons offer a plethora of excellent sandstone boulders, with literally hundreds of problems found in the various draws and gullies located outside of Boulder, Colorado. The boulders and problems found on the southern end of the Flatirons offer some of the best options: Lots of problems and boulders, not much traffic, and an ideal setting. 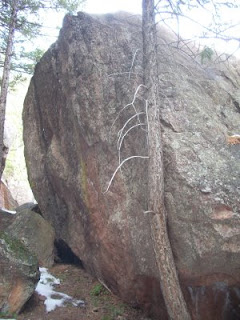 to the PB Boulders. Partially covered in Samet and Benningfield's Colorado bouldering 2,

these boulders are a gem with tall, highball lines waiting to be plucked. Many of the main features have gone once or twice, but there are still a ton of lines just waiting for the strong boulderer (or even climber for some of the taller lines) to come along and tick. 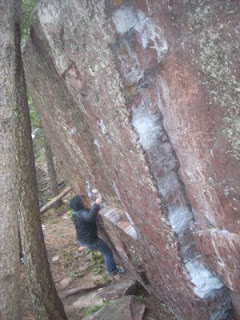 Way up at the top of the PBs is the classic Full Gronky Boulder. This boulder is a real gem, with several lines going straight up and then the stellar Full Gronky, which traverses from left to right and then up the slappy feature. 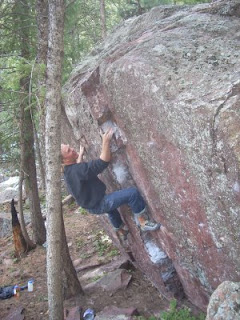 Next to the Full Gronky is a really nice slappy arete problem that is also well worth doing. All in all, a stellar day on stellar stone. If the hike was not so long I'm positive this place would see more traffic and several hard lines would be established. Anyone looking for a hard highball? Then put on your hiking shoes and get huffing. The PBs are well worth it. 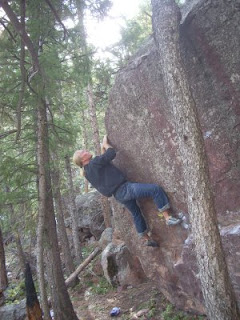