This morning we went south to Deer Creek Canyon to run the trails there and preview the Fear the Dear race course. My goal was to try and do a long run, so I thought I would do the course twice, reversing direction the second time for a total of 26 miles. Never having run these trails, I was eager to check them out and see what they had to offer. I was not disappointed! The trails are beautiful, with lots of scenic views to the east and north and south along the hogback and Front Range. Likewise, the trails are a mix of semi-technical rocky running and smooth buffed single track through dense Ponderosa forests (I read online that a rock plate might be necessary - no worries, there is nothing that rocky here).

After the first lap, which was uneventful, I was already starting to feel the heat and elevation changes, but mustered up the ambition and headed out for a second go. However, after another hour plus I pulled the plug and just came back down to the car where I commenced drinking several liters of water. Although I didn't make my goal mileage, I was still happy with the run - this was the longest time wise I have run this spring, and with all of the vertical it made it feel twice as long. The question is, is more miles better or more vert?

Either way, the Deer Creek Canyon trails are great, with plenty of shade except on Meadowlark and some spots on Red Mesa. Overall the day was great and I'm happy with it. 20.2 miles, 6,359' of gain, 3:48:23 total time. There were a few other runners out as well, but overall the trails were fairly quiet except for Plymouth and Meadowlark.
No comments: Links to this post

Well, spring is here, and despite what Mother Nature may think, that means change. After three years in the valley, we are moving back to our home on the Front Range. Like plants in spring, growth and professional opportunities are the reasons why. With that comes a new local run - in this case it will be the trails of Apex Park. We did a test run today to see how it will all work, but we were able to find an easy way to run from our new place for a quick urban mile before getting on the trail network. Although the Apex trail only climbs 1,800' in 2.8 miles, you can accumulate more vert and miles by adding on all the other trails of the park. So the new home run will be 10.1 miles and 2,300' of vert. - I did it today in 1:44 at a pleasant pace. Over the course of the next few months I'll look to lower this run below 1:30 and beyond and use it as my standard baseline run.

Other signs of spring are starting to show themselves here in the valley... (the shoe print is size 12) 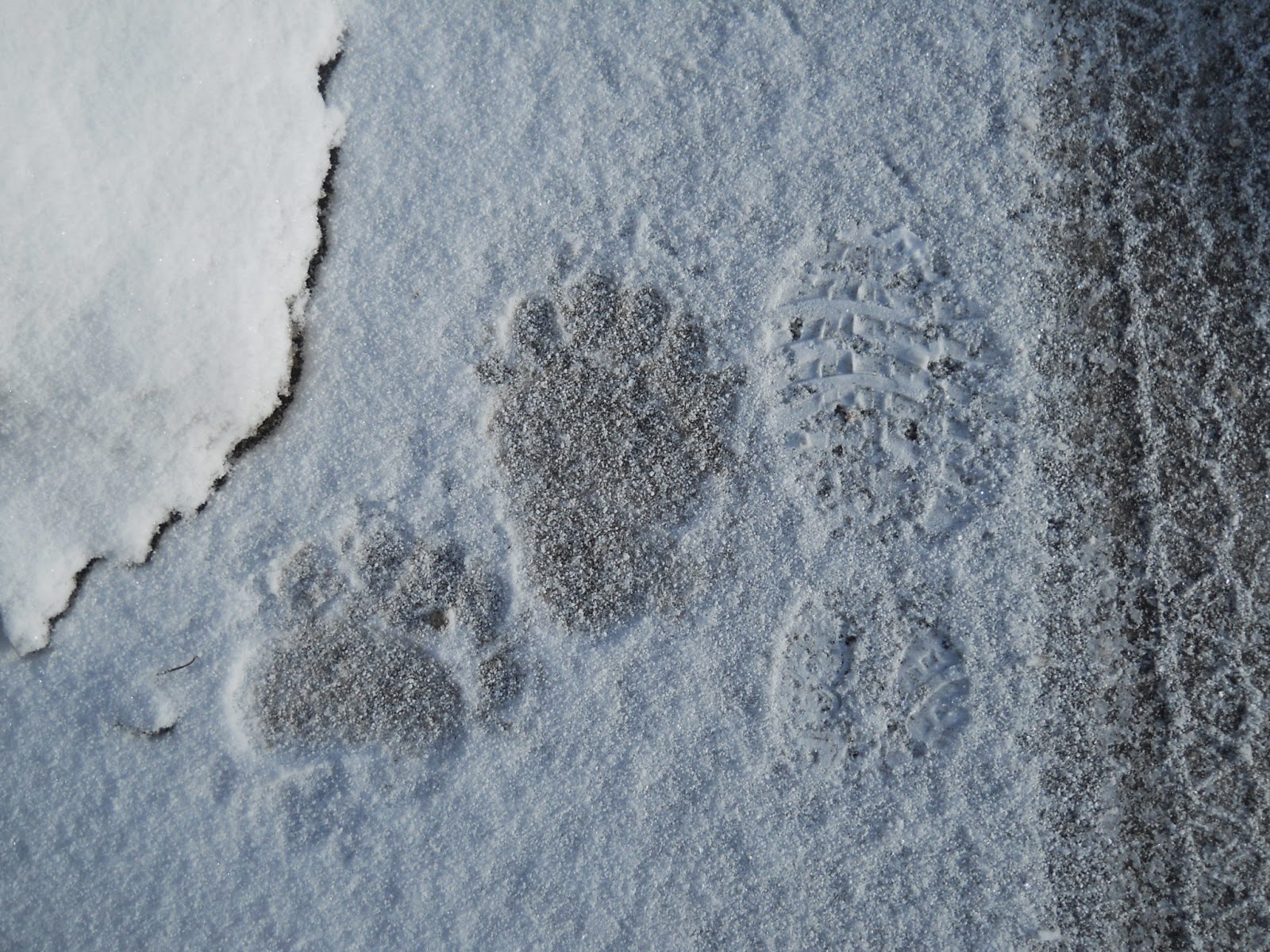 Apparently winter has decided to stick around one more week. With 4" of fresh this morning, and the trails on the Front Range buried under this weeks earlier snow, I was looking for some way to get in a semi-long run. Over the years I've learned that the Georgetown/Idaho Springs area is geographically located in some kind of rain/snow shadow, and so with a hunch I looked at the webcams (thanks CDOT) for Idaho Springs and Georgetown. Sure enough, the area was dry and it looked like they got minimal snow, so we decided to try and do two laps on Saxon Mountain as a pseudo long run. The bottom of the run was still totally dry, but the last mile and 500' feet or so involved some trail breaking and post-holing. Still the outing was successful and I was able to get in 18 miles with 5,000' of gain in 3:12. The snow slowed me down a bit, and it was hard to start the second lap (couldn't I just call it and get in the car?), but I was happy that my quads held up for the second descent and really didn't give out. Good news for this summers races and planned mountain runs.

As I was running, I was wondering how the mountain got its name. Apparently, Saxon Mountain (also known historically as Summit Mountain) is named after the Anglo-Saxon mine located near the top on the western slopes. The Anglo-Saxon mine was a major gold and silver mine in the 1870s. Other interestingly named mines on the mountain include: Magnet, Sequel, Pickwick Lode, Charter Oak, Federal Lode, Wyandotte, Extension, and Harrington mines. Of these, the Anglo-Saxon was one of the largest and most productive, delivering 1,000-9,000 ounces per ton of silver! You wouldn't really know it now based on the ruins and old mining shafts, but this mountain produced some serious money for those who decided to mine it back in the day.
1 comment: Links to this post

One of the hard things about living up here in the valley is that getting a good amount of vertical in a run can be challenging during the winter. Skinning up Jane and the Pass worked well over the winter, but now that spring is here, I want to run so that I can work my lungs and quads (especially on downhills). I've been hunting around for a close-by run that would have a nice amount of vert. (most runs in the valley that are not still covered in snow only have around 1,000+ of vert.). Saxon Mountain, just over in Georgetown seems to fit the bill. Beginning at 8,500' the climb is a brutal 4.5 miles one way with 2,500' of gain. Although the run is on a 4x4 jeep road, it still simulates a quality mountain trail run because of how rocky and bouldery the road is. Beginning in Georgetown on Main Street at the Saxon Mountain sign, just head up the 4x4 road and begin the endless climb of switchbacks until you reach the top. In the summer, when the snow melts out, you can go 2 miles more and gain another 700' of vert., but right now the rest of the climb is snow free and ready to go. After last nights 8 mile tempo run, I started a bit slow but got into a good groove on the climb. There are some great views on this run, and a couple old mining cabins to check out as well. 9 miles, 2,500' of gain, 1:32 round trip.

On a side note, this was my 31 summit above 10,000' for the year. Slow start, but still solid considering I didn't really start to do anything until February. 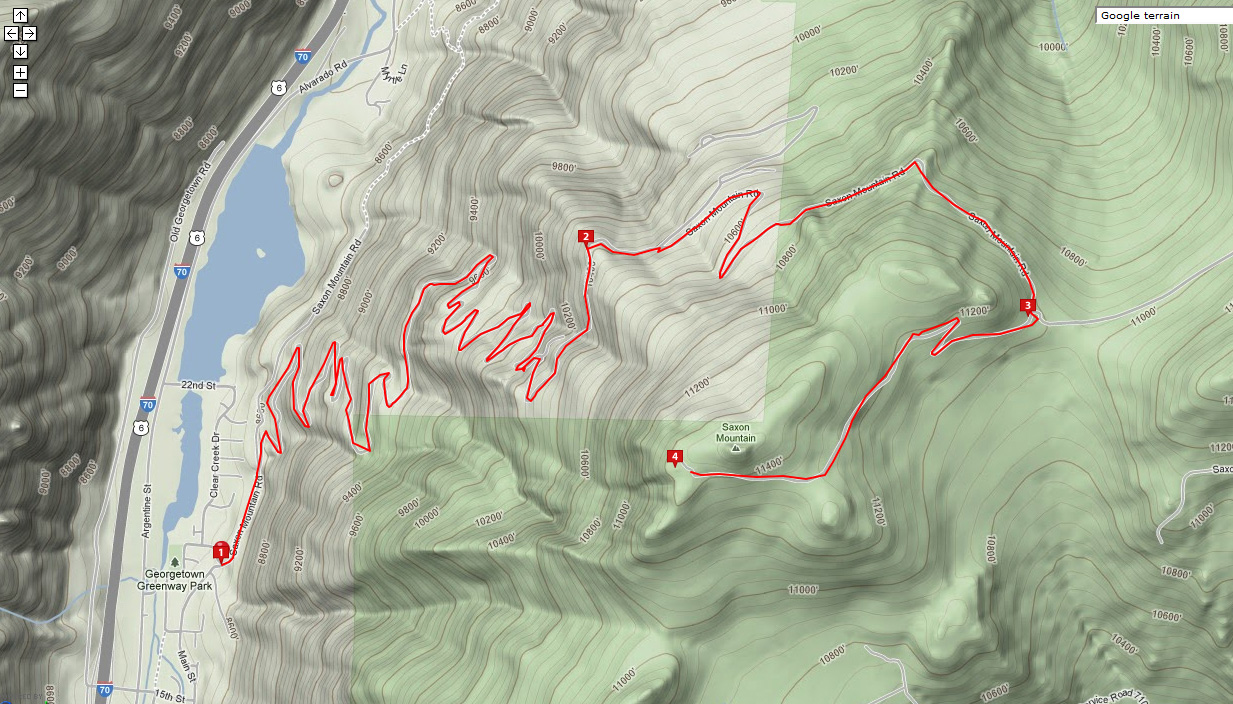 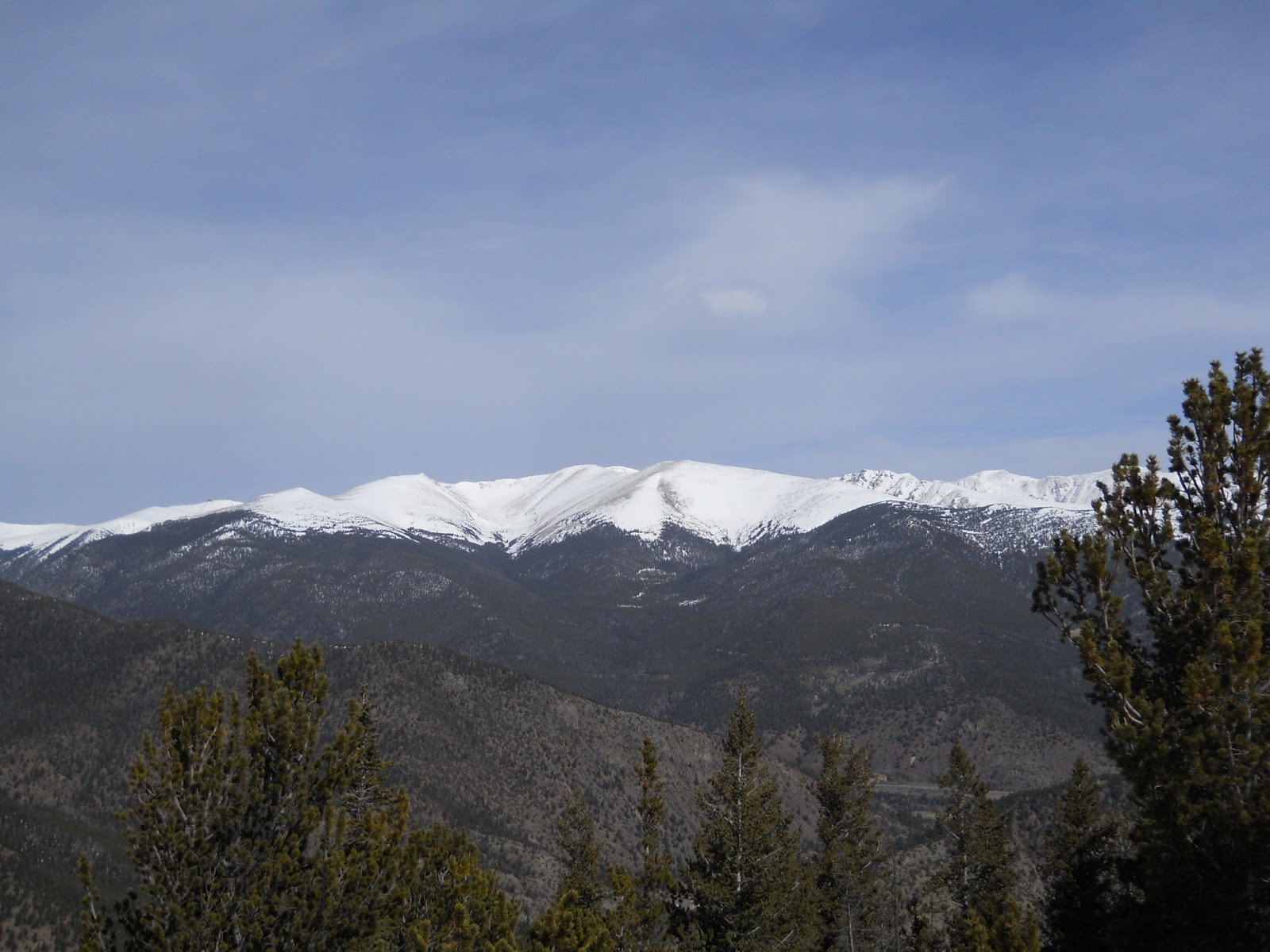 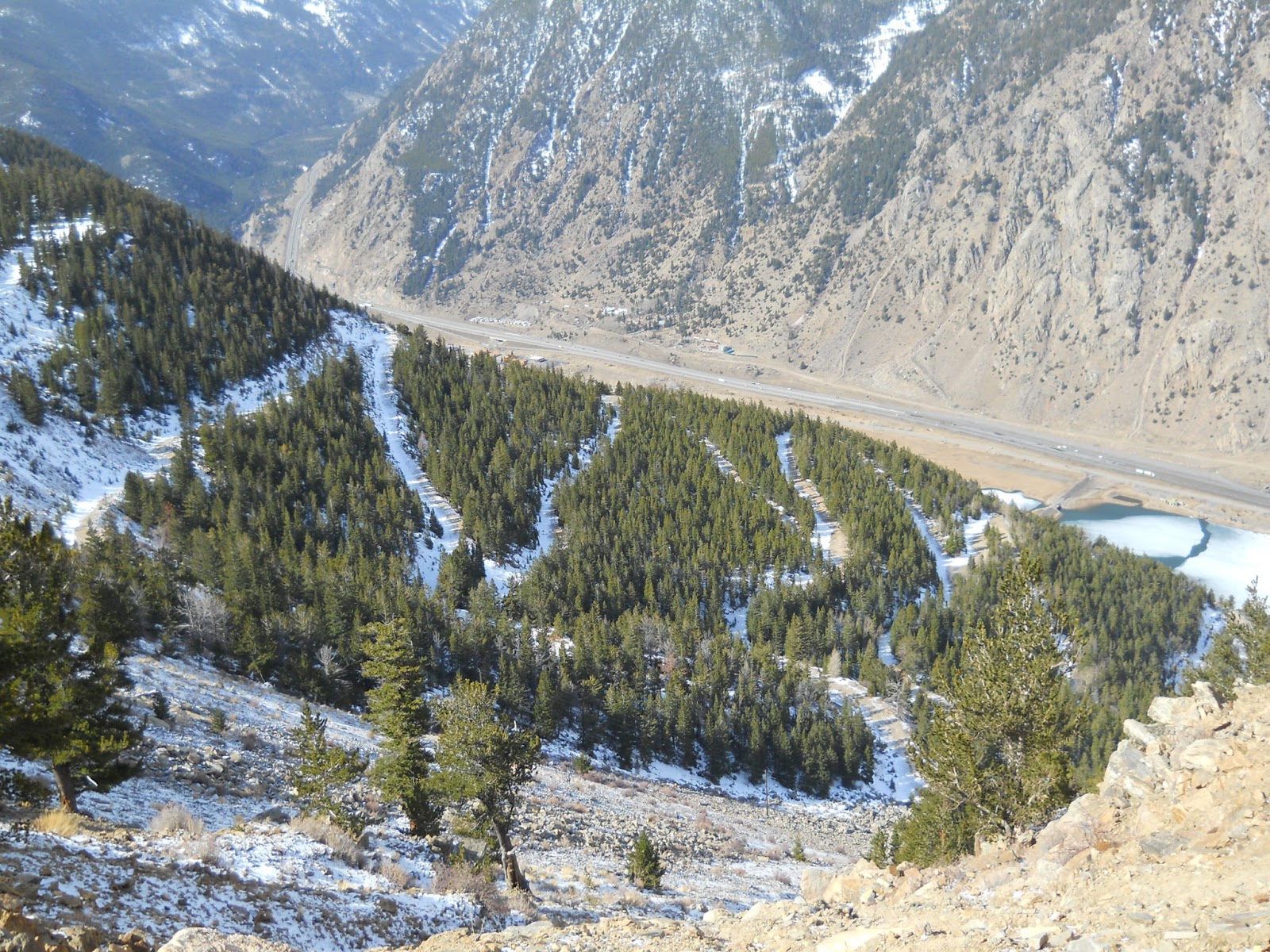 Looking back down at the endless switchbacks... 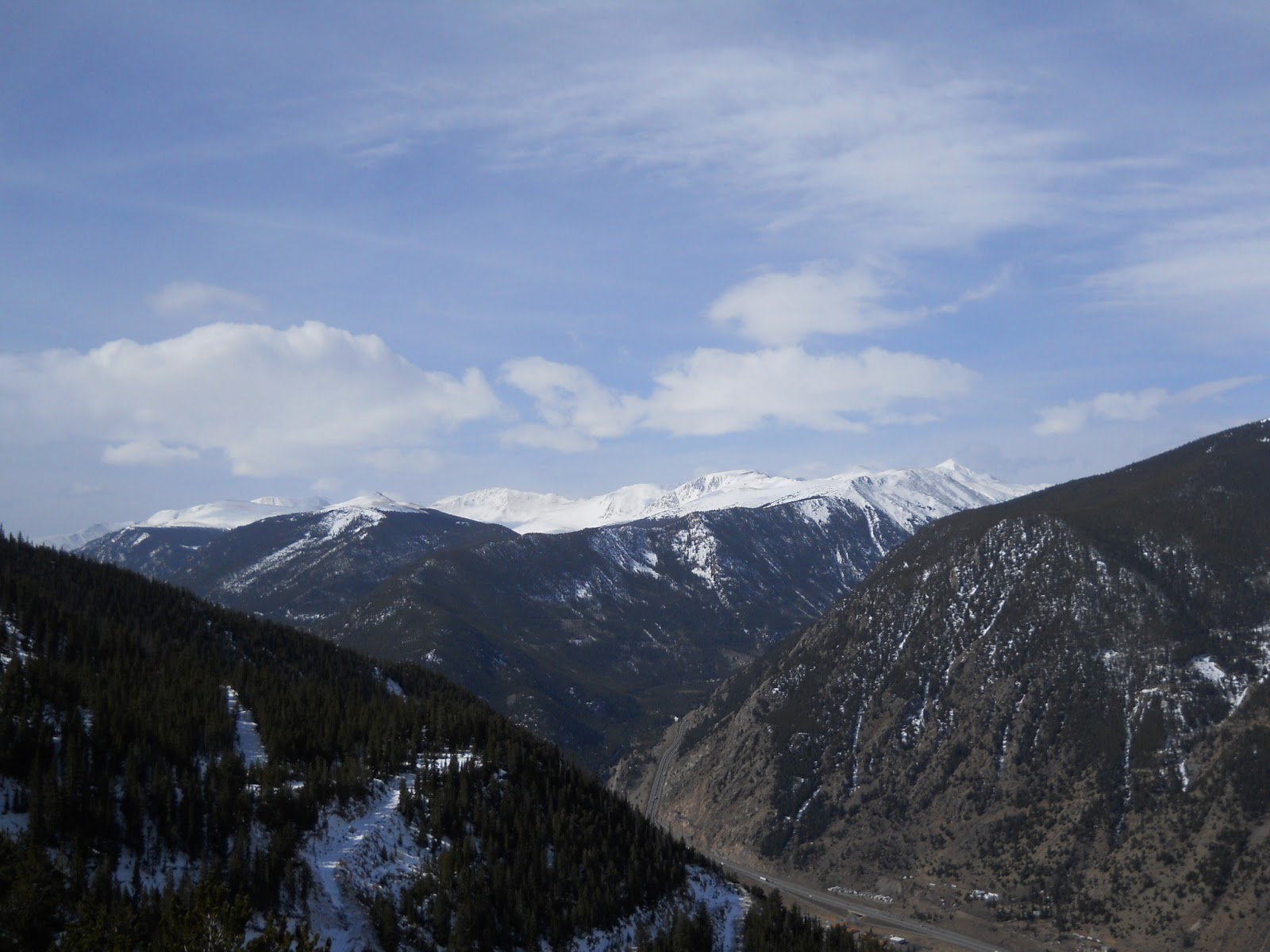 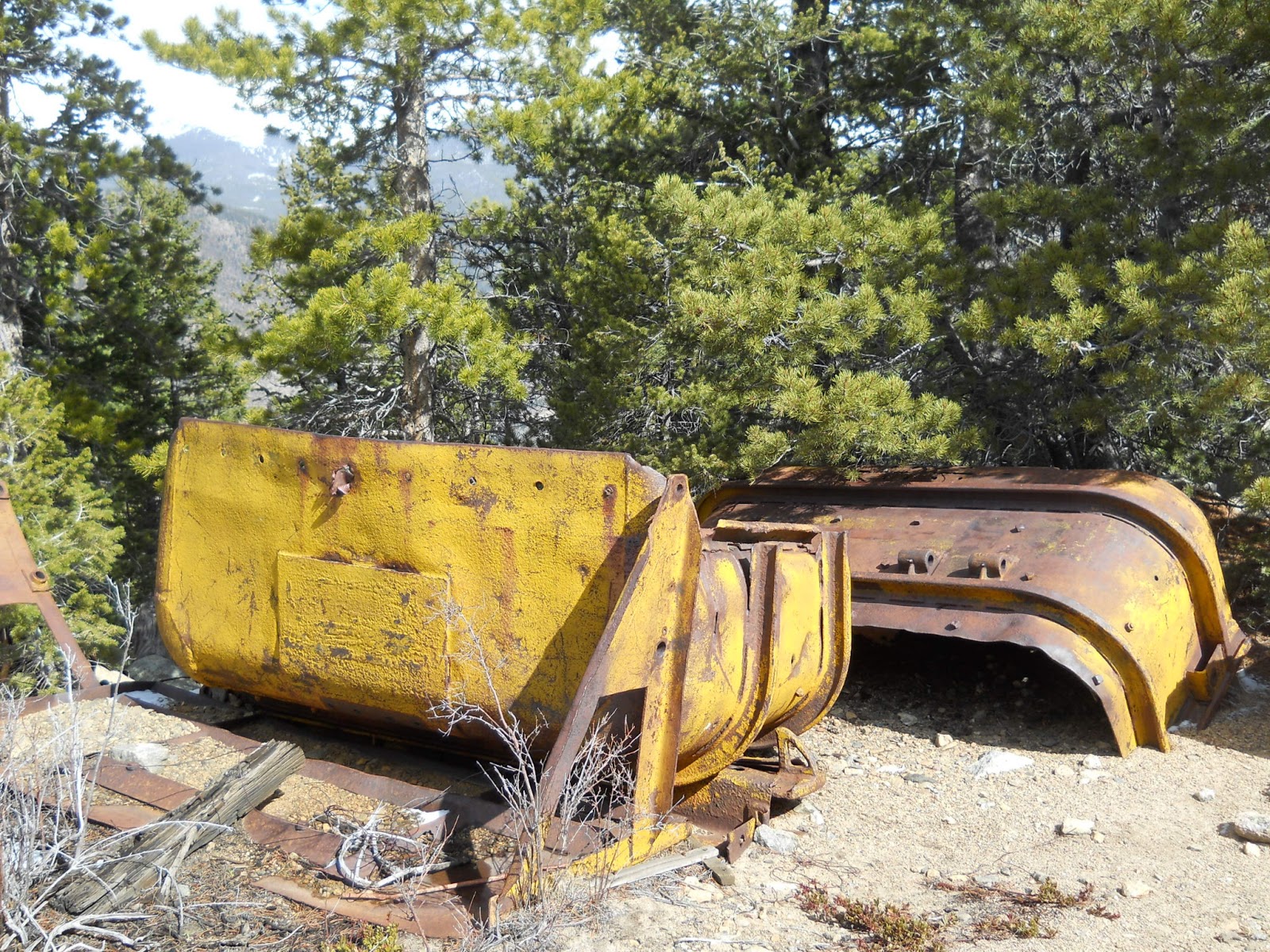 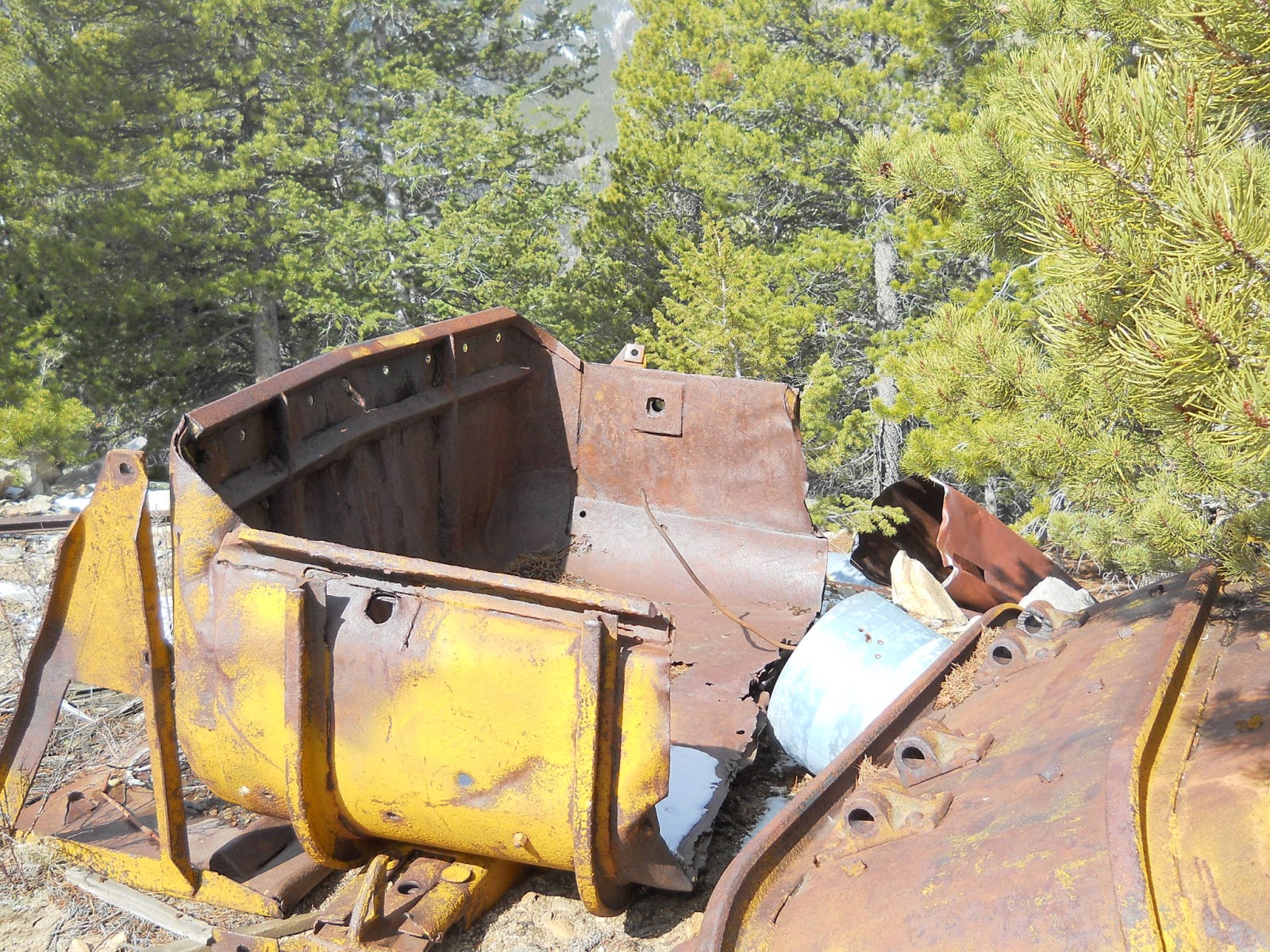 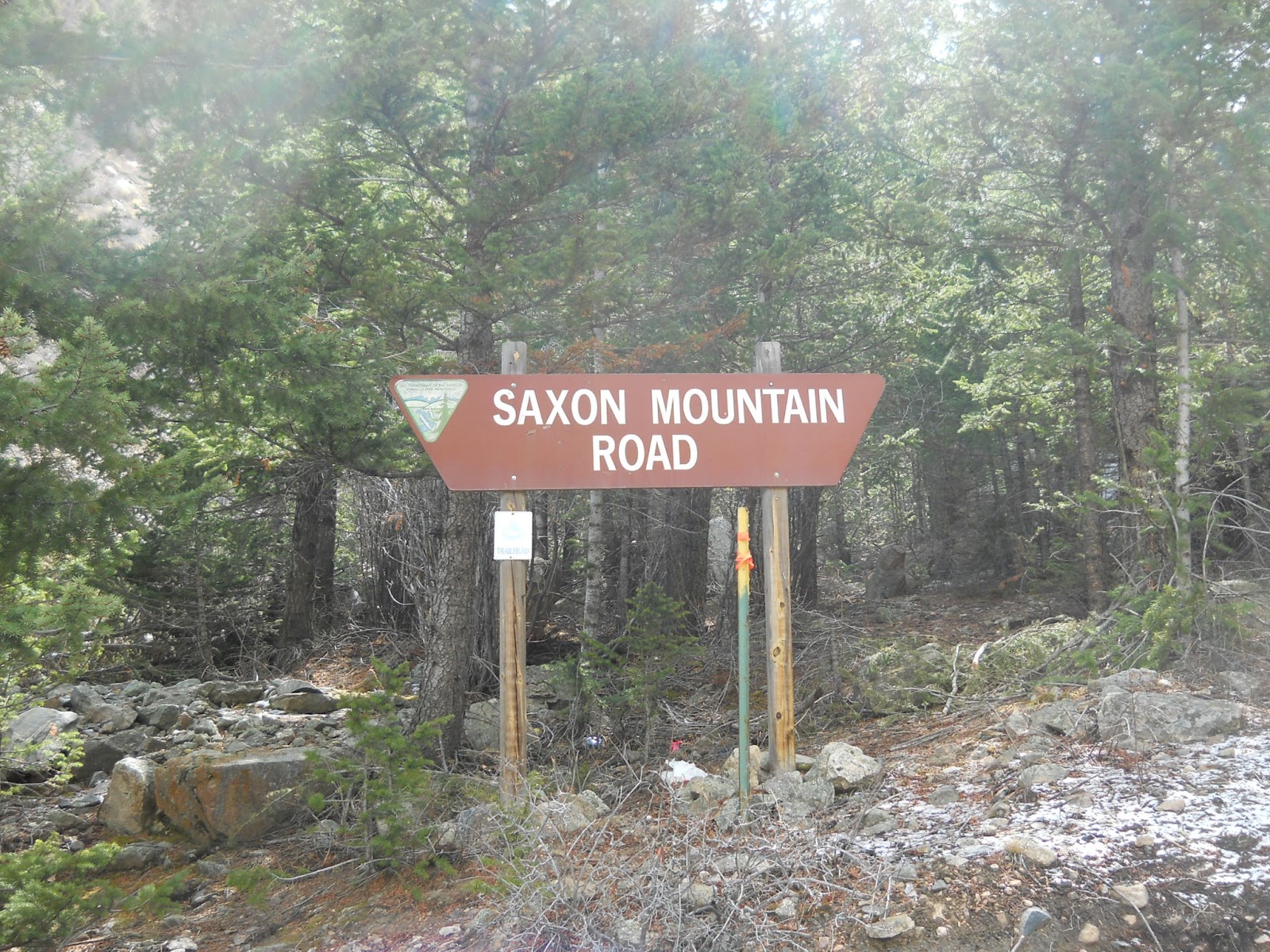 
Ran the White Ranch Loop today. This is an excellent loop just outside of Golden that provides a substantial amount of climbing on semi-technical single track. There is an extensive network of trails in the White Ranch open space, allowing one to come up with a wide variety of loops, out-and-backs, or other variations. However, running the outer loop of the trail network allows one to get in the best views, biggest vertical, and enjoy all that the open space has to offer. I ran the loop counter-clockwise, so that I was coming down Mustang and Belcher Hill. The loop is 14.3 miles, with 3,424' of gain. I ran it in 2:32 today - in the snow and rain.

I really enjoyed this loop, and found it to be an excellent training run. I like that it is a bit longer then many of the usual 8-10 mile trails found in the Boulder/Golden area, it has a good amount of vertical (more then Green), and sees little traffic when compared to other trails. Also, because the loop has several good climbs and descents, it forces one to switch back and forth between their climbing legs and their descending legs, something that I believe is really beneficial.

The loop goes: Belcher Hill Trail - Longhorn - Rawhide - Belcher Hill - Mustang - Belcher Hill. It would be interesting to see what kind of times people could put in on this loop. If the trails were all dry and not snow covered, there are some sections where one can really crank, and I don't doubt that someone could come close to the 2 hour mark - I'm sure I could get under 2:15 on a good day. 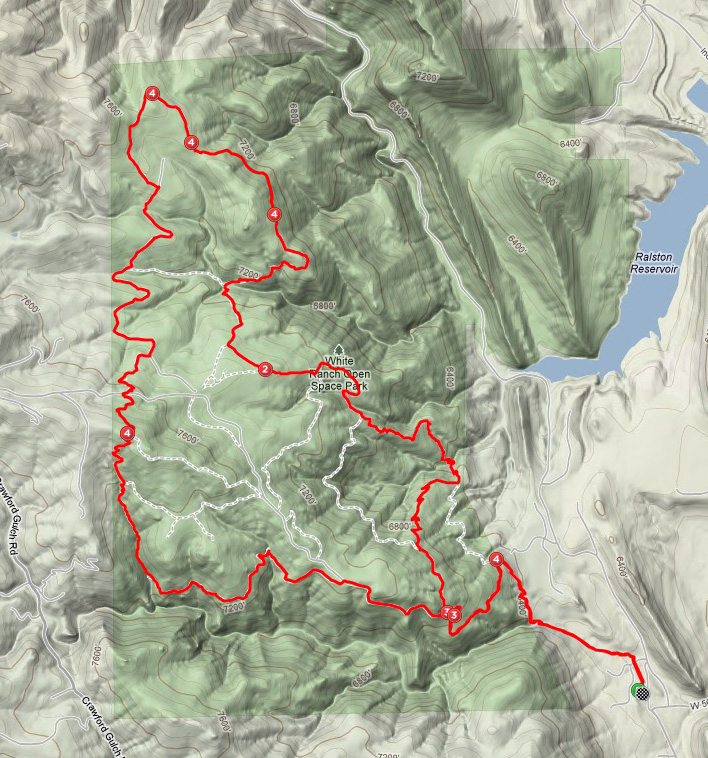 
Nice run along the Continental Divide this morning over three peaks. 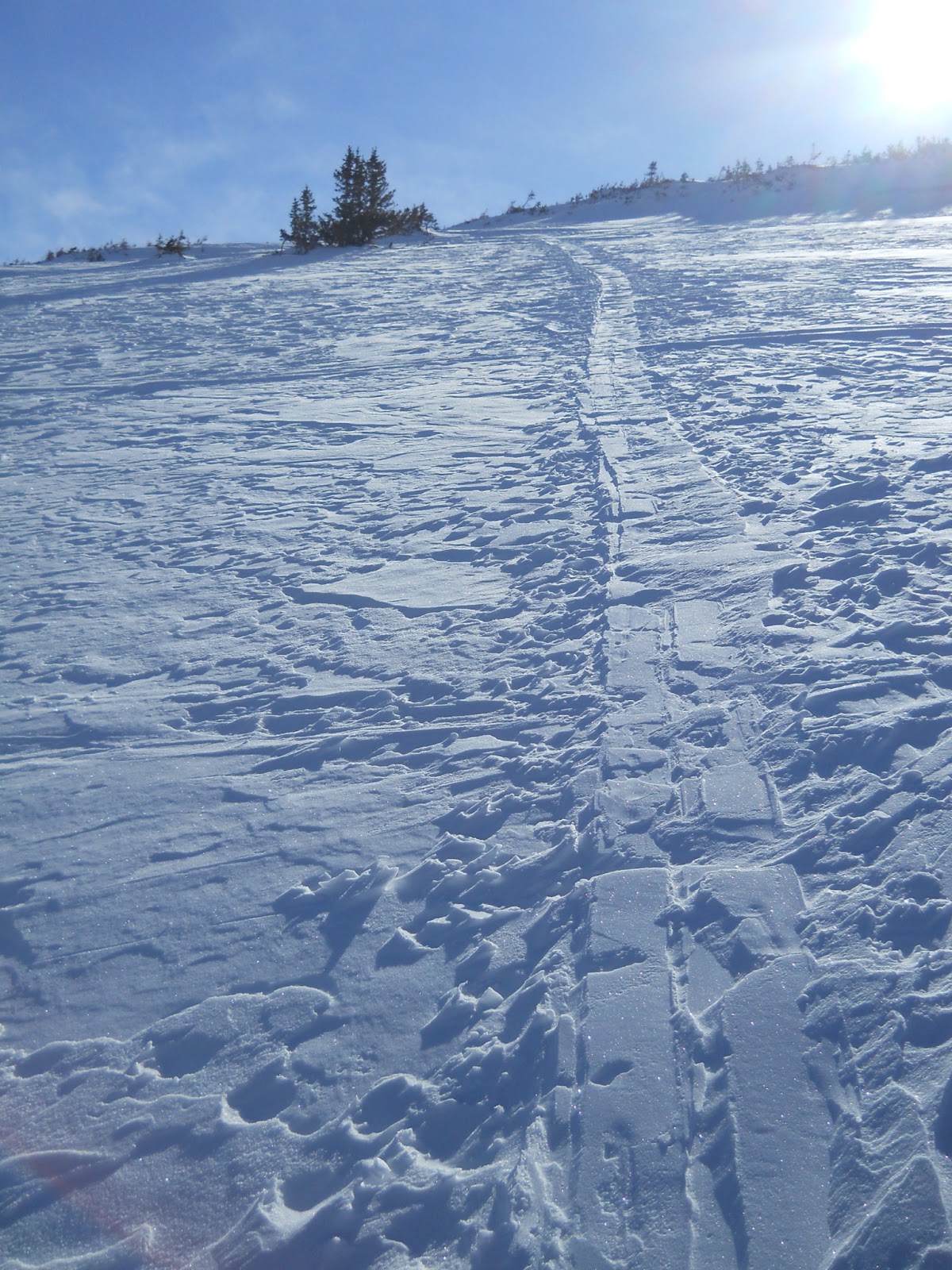 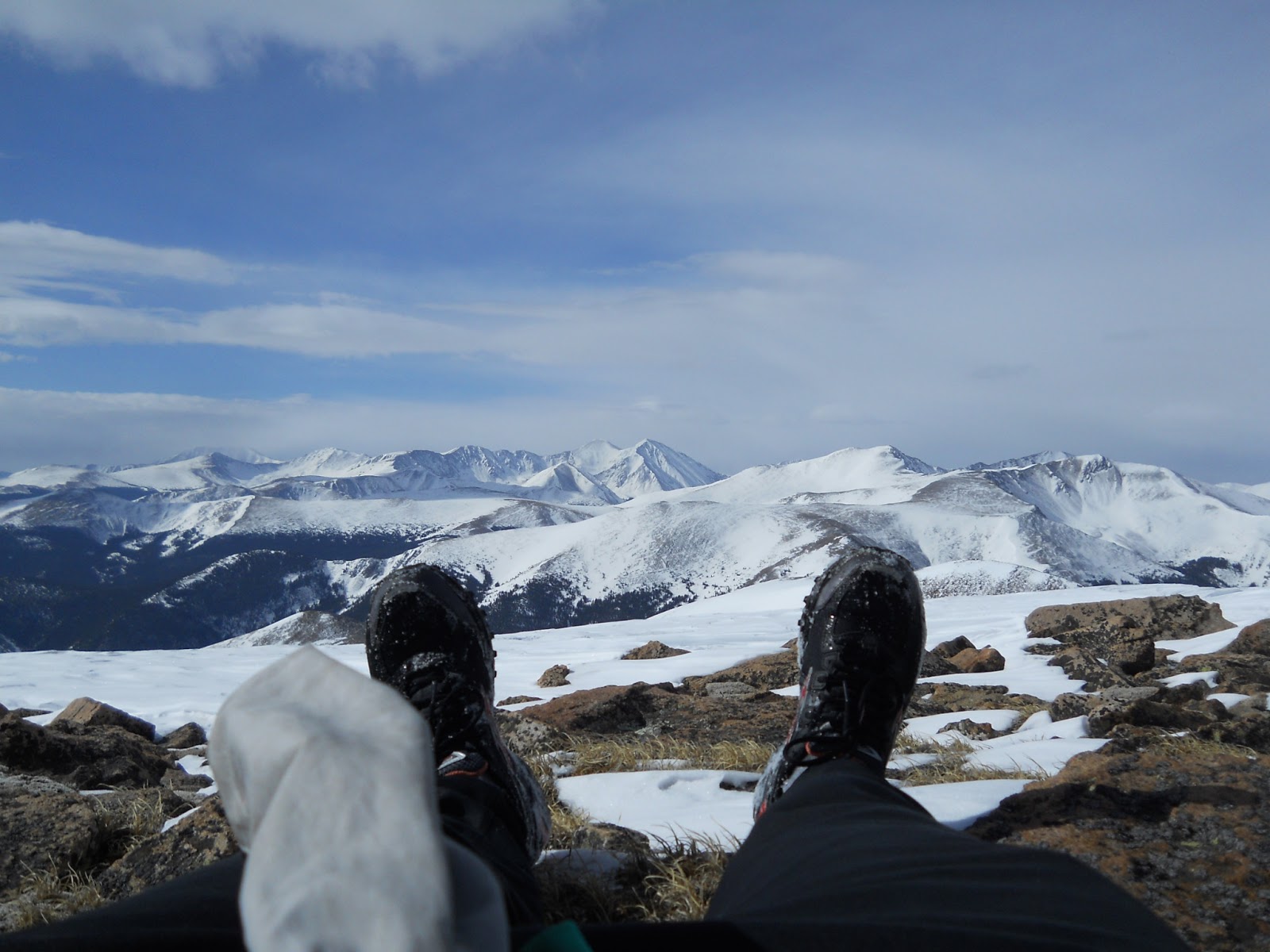 Looking at Grays and Torreys and the Pangaea Traverse from 13,100' 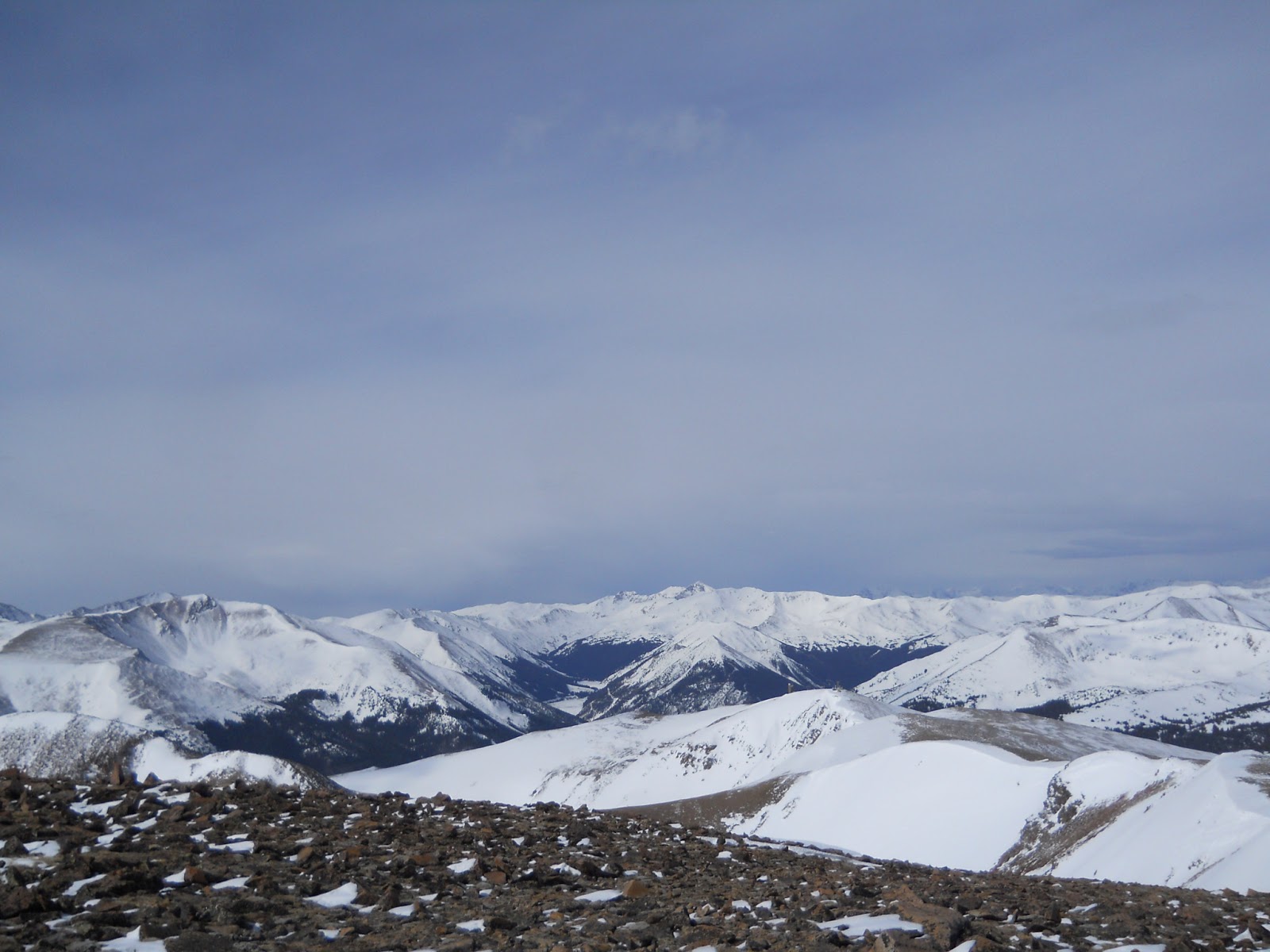