Yesterday was my 50th running of G & T in as many weeks. Saturdays are never good (except in winter), and a Saturday in August guarantees crowds. However, it was my only option to keep the challenge going, so I opted for a super obscure route - the Direct North Ridge of Torreys. This is a gem of a mountaineering ridge, but is rarely if ever climbed. The ridge sits just to the west of Eroica, a classic spring snow route, and just to the east of the Tuning Forks, the other classic spring climb on Torreys north face. Dead Dog receives the most traffic in the spring, with the Tuning Forks getting the second most. Sometimes people do Eroica, but I've never seen many on it. The ridge in between the two is what I like to call "classic class 3/4 scrambling on Rocky Mountain choss." If you do not know how to move efficiently and safely over technical talus choss terrain on slopes approaching 70 degrees or so, this is not the route for you. However, if you are looking for a fun way to G & T without seeing a sole until summiting, this might be up your alley. It is similar to Elbert's west ridge, but without the goat trail, more technical, and with a ton more choss.

Start at Bakerville, run up to the Grizzly/Stevens split, and head up Grizzly Gulch. Cross the river 3 times until reaching a large avalanche path with tons of downed trees blocking the passage. Go to the far side of the avalanche path, and then begin the 3,000' climb up the north face of Torreys. I stay along the edge of the trees, then make my way through a small bench up and over the cliffs to gain the bench before the talus starts. From here, head straight up on the right side of the massive avalanche gully, picking the most efficient line through the talus. Continue up as you surmount another small band of cliffs, then continue as the ridge forms. As you continue to climb, you will get excellent views of Kelso Ridge and the Grizzly basin. There is nothing hard on the ridge, just 3,000' of straight hands and feet climbing. Finally, the ridge dumps you out directly onto the summit of Torreys, just past the white cliff section of Torreys. From here, it is a quick run over to Grays, and then the usual descent back down to I-70. I ran this yesterday in 3:46 rt with a lot of stops for photos and to wait for the crowds on the way down. 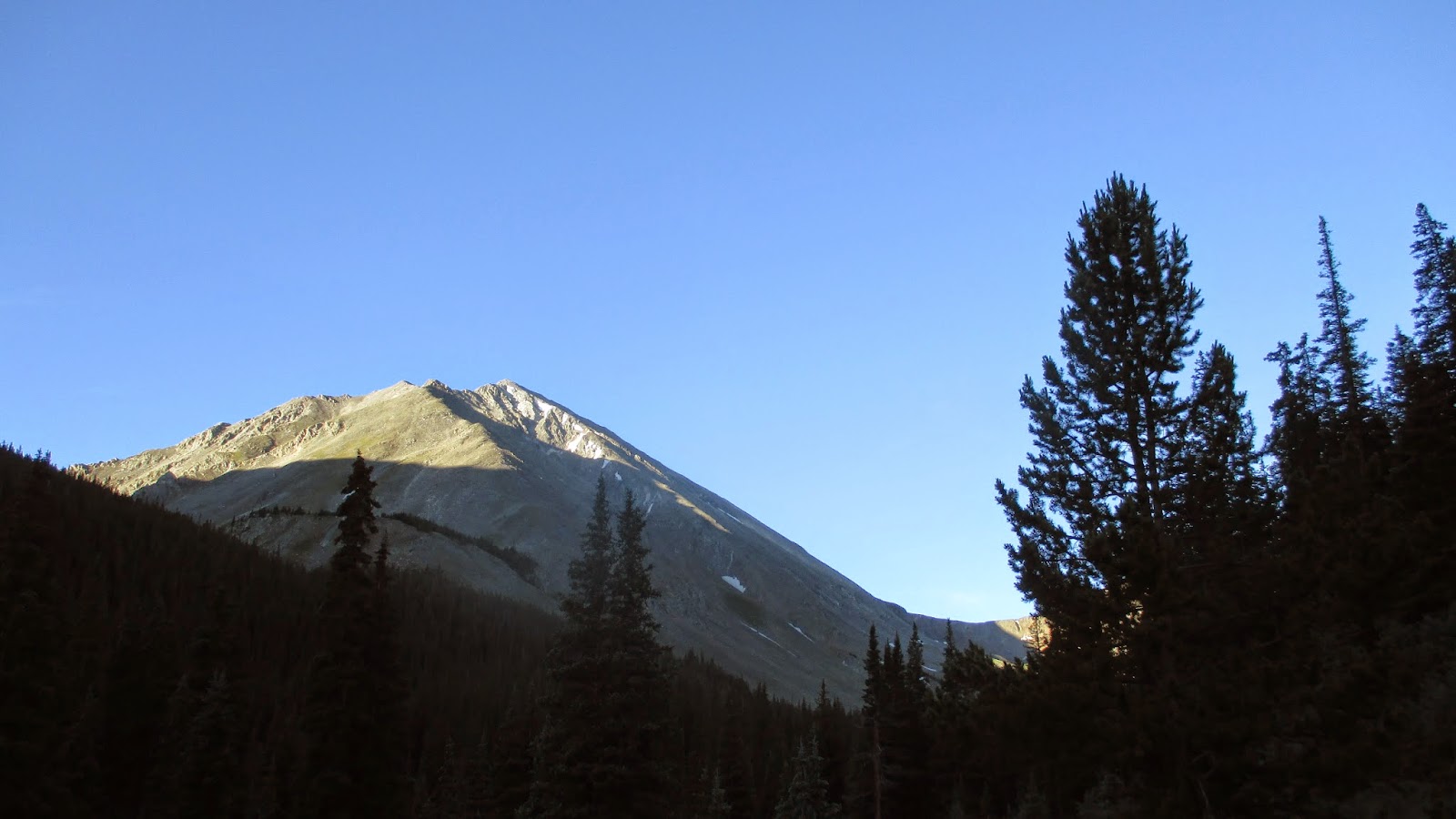 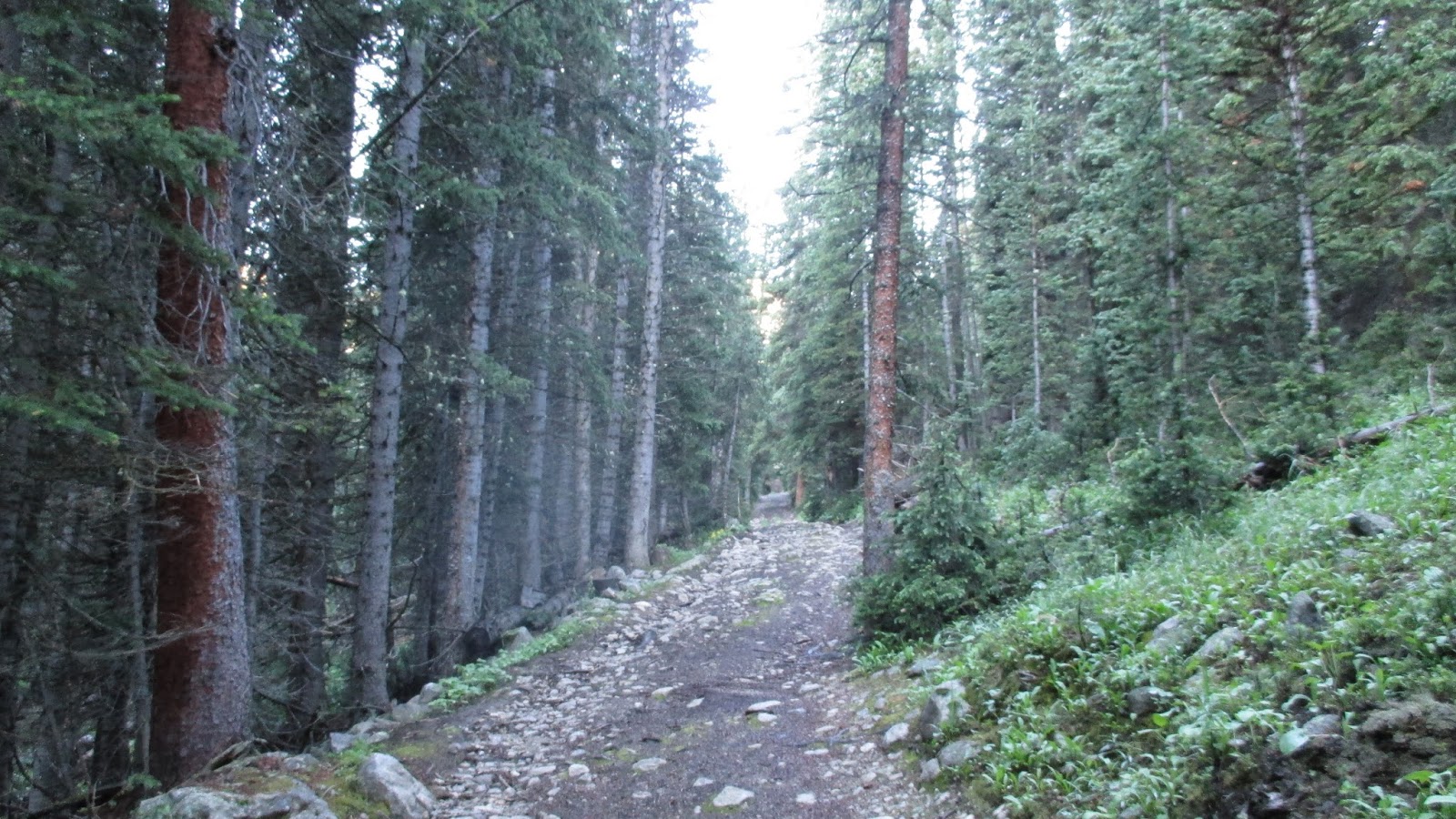 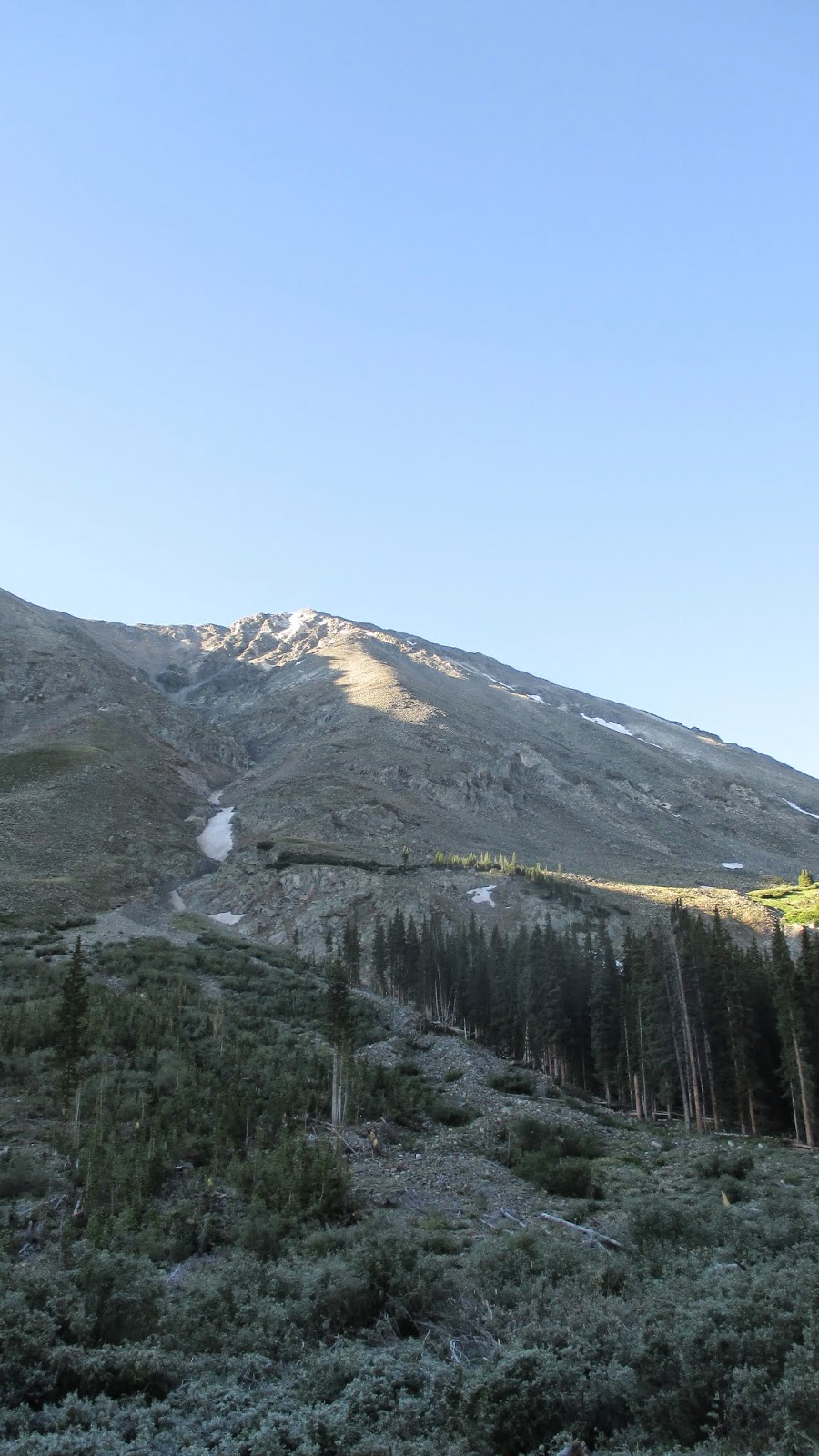 The ridge is in the center right of the photo. 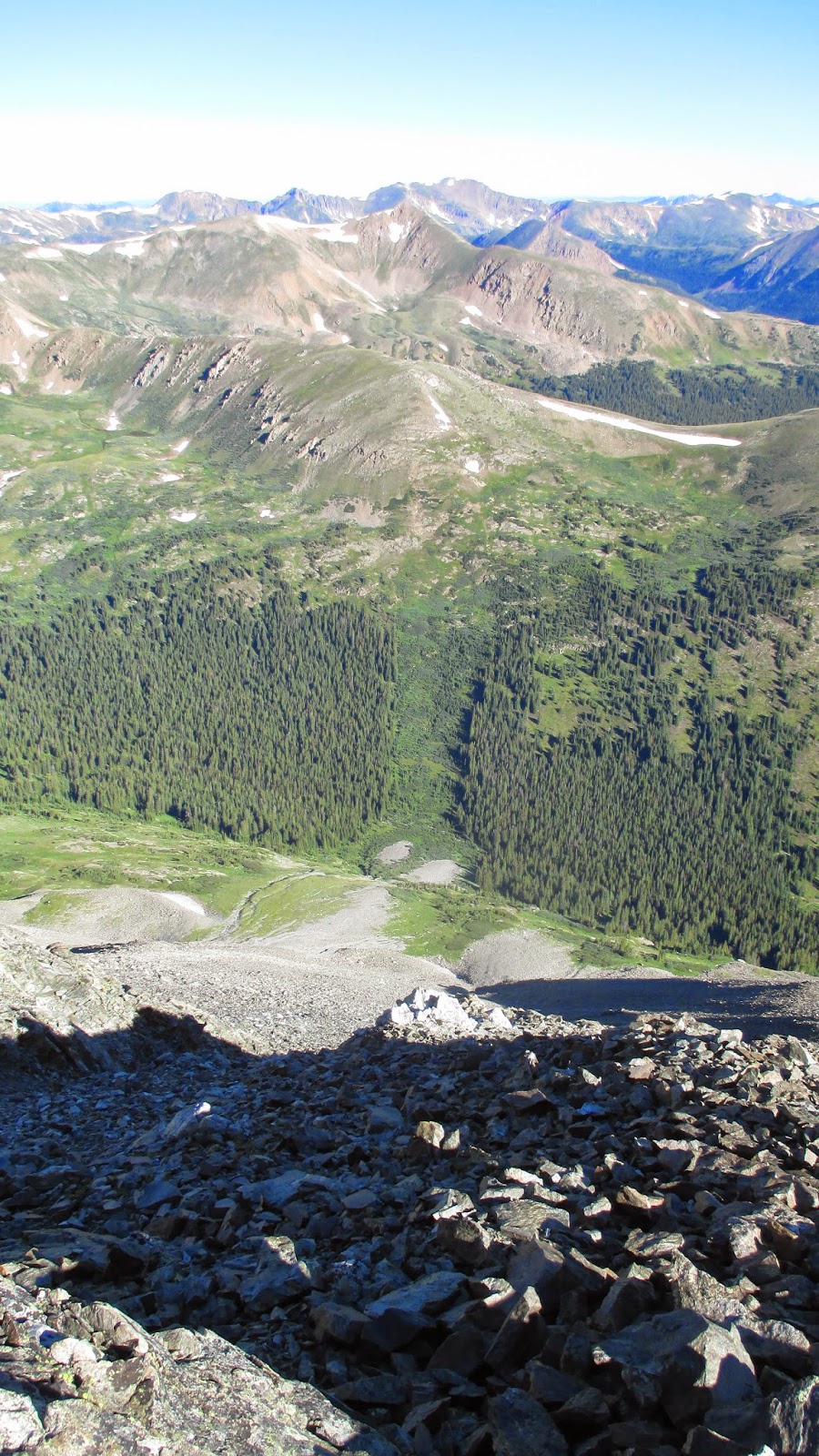 Looking down about 2/3 the way up. 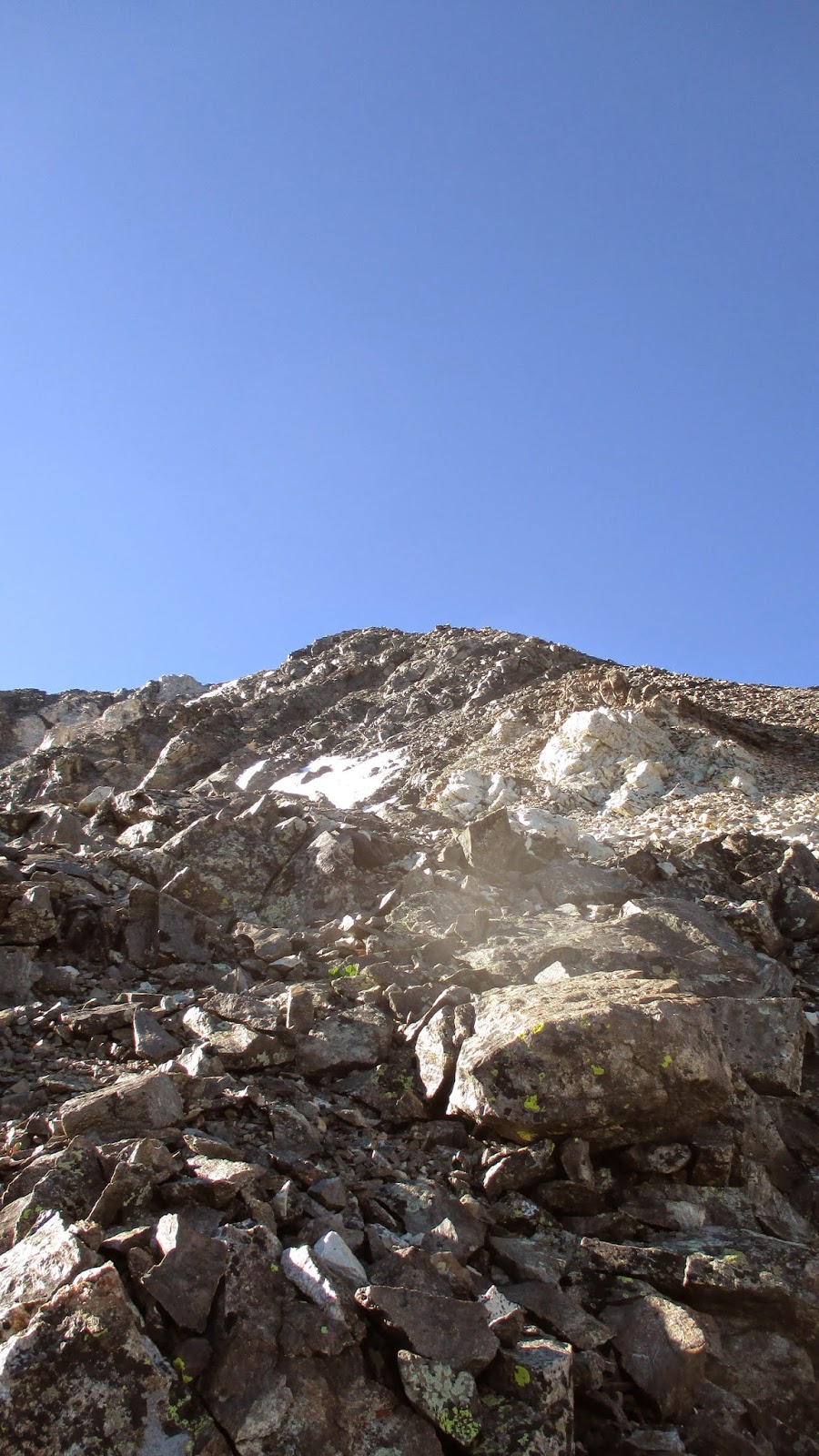 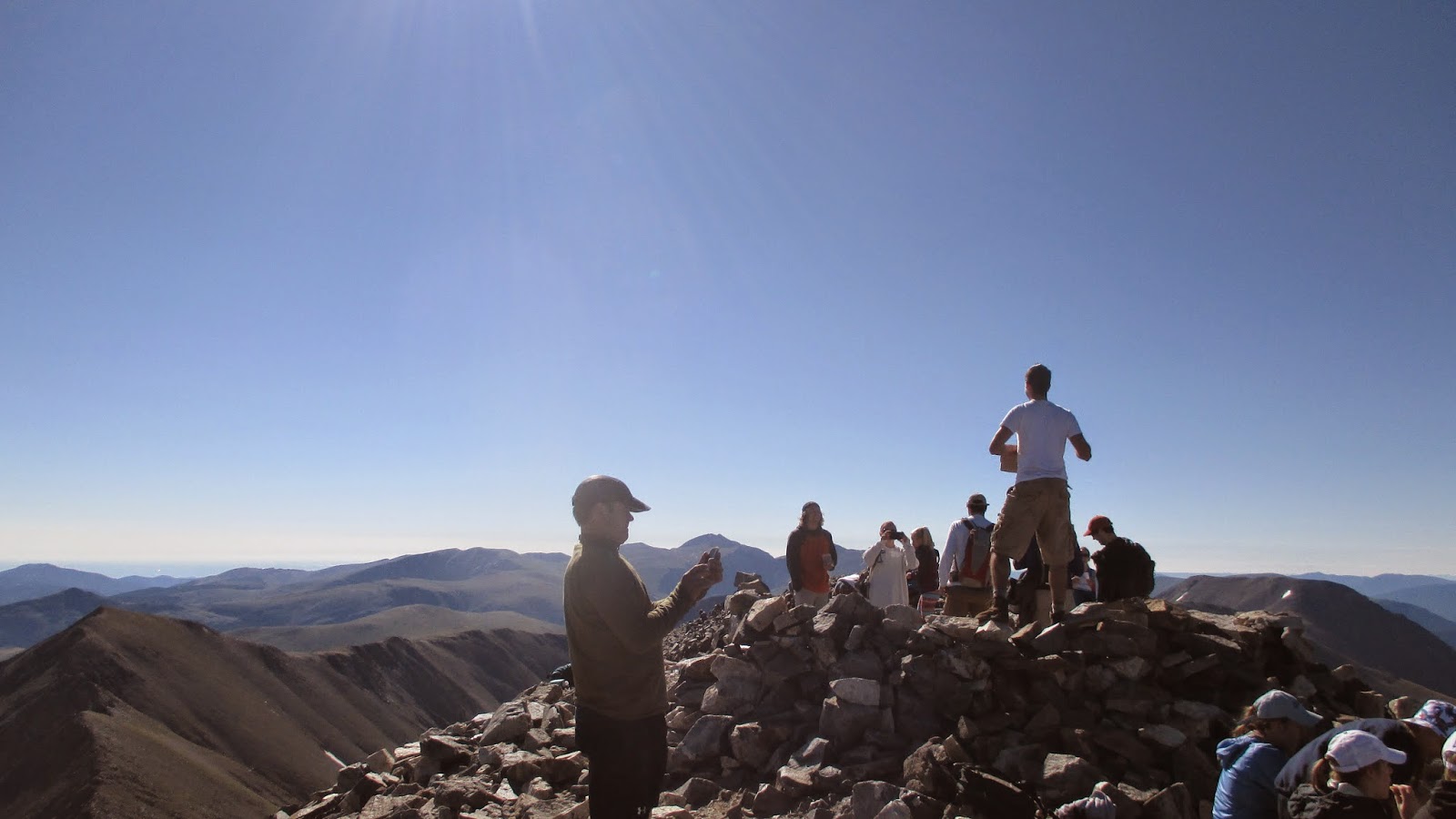 Went up and did some climbing at Eldora on Friday. I put up a handful of problems on this wall about 10 years ago. It's a great little spot, as it sits at 9,500' and is only 30 minutes from Boulder - great for an easy escape from the summer heat. No one climbs here really, so it is a bit overgrown. Problems range from V0-V8 with the potential for more. 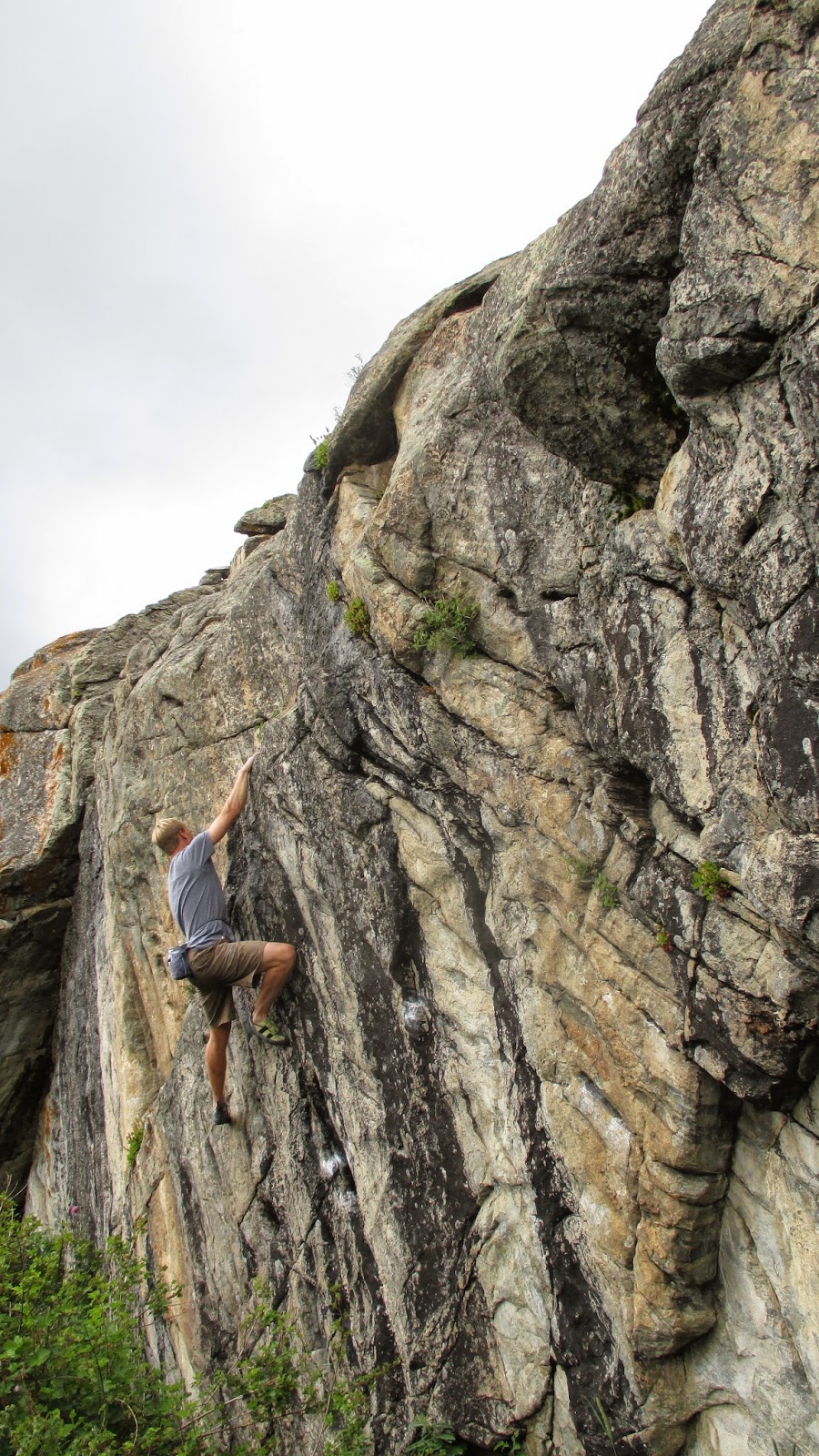 Alan Arnette, out of Estes Park, successfully climbed K2 a week ago. Really impressive, and it was great to follow along on Twitter.

A couple new articles have been published. One is on compression clothing, which is all the rage right now. Seems like the science is still out on just how beneficial the clothing is, except that subjective perceptions can make or break a race or send. The other article looks at heavy load endurance training programs. The authors found that such training programs/blocks can result in subsequent underperformance. This makes perfect sense, so no real news here, but there is a reason behind being a bit tired or slower after some heavy training. It takes a bit for the body to bounce back and return stronger.

Fun video on the Quandary Crusher, a "race" up Quandary Peak. I believe it is put on by the same people as the Kite Lake Triple Triple, which I'm running.

Finally, some Nolans 14 news. James Sims is attempting Nolans starting on the 5th. Best of luck. Two people have tried to do a thru hike of Nolans this summer (Gavin and Ryan), both pulled out after about 3 summits. Peter and Mike tried a thru hike in July, but the monsoons turned it into a cool Sawatch fast pack instead. Ana Frost is currently training on the course, as are about a dozen other people. I'll be giving my first go at it next week, so August through the first two weeks of September will see a lot of action on the line. Best of luck to everyone giving it a go!