There was a great article in the New York Times the other day about telemark skiing above the Arctic Circle. In Riksgransen, Sweden apparently there is a hardcore group of telemark skiers. Looks like a great place to hit next spring...

The helipad was little more than a flat patch of snow roped off between some parked cars and the hotel. The chopper didn’t inspire confidence, either: it was an ancient-looking craft, with a nearly 50-year-old fuselage and a crack in the bubble windshield. But this lawn dart, I was assured, was a gem — an Alouette III, the classic French mountain helicopter. After some perfunctory instruction by the mountain guide, we climbed aboard and belted in. Blades Cuisinarted the air. Seats shook. Two guys taking off their ski boots next to the helipad ducked for cover. Then we were hammering south into empty mountains. 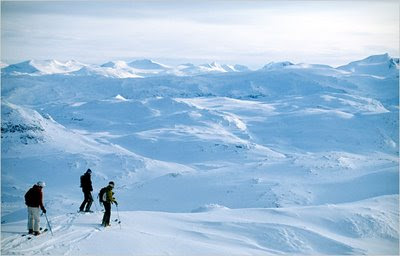 When the helicopter shut down the rotor atop 5,209-foot Vouitasrita, the silence poured in to fill the void. Our mountain guide waved a pole south across a horizon of white breakers. “More or less everything you see here, we can heli-ski,” he said — all the way to the Finland border, to the east. The summit of 6,926-foot Kebnekaise, Sweden’s highest mountain, nosed for prominence on the southern horizon.

This was an April evening in the land of the midnight sun.

There’s an understanding among Scandinavia’s diehard skiers: when the weather turns warm, it’s time to finish off the season at the world’s northernmost ski resort. There, at Riksgransen, more than 130 miles above the Arctic Circle in Sweden, the skiing isn’t over until that midnight sun finally droops below the horizon.

“It’s become a bit of a legendary place for the Swedes,” explained Torkel Karoliussen, a champion Norwegian telemark skier who has visited Riksgransen more than a dozen times. “The season doesn’t really start until March, and it’s best in May, and you can ski under the midnight sun in June.”

Read the rest of the article about telemark skiing above the Arctic Circle here.