I'm a real big fan of what I call "Adventure Trail Running." This is where you find a trail - usually on a map at poor resolution - and decide to run it. Other times, it can simply be finding a peak or mountain that you want to run, finding the closest access point, and heading up on old trails or animal paths. I've been doing this for years all over Colorado and New Mexico, and I figured I would share a couple. Why? Well, I doubt anyone will actually go and do these trail runs. They are not easy to find. They don't have clear, wide pathways where you can get up a good gait. There are river crossings, serious bushwhacking, talus slopes, exposure, canyons to surmount, and the like. But that is the whole adventure; running a trail or obscure path that perhaps has not seen another human for years and years.

Reminded by my run yesterday from Eldora (~9,000 feet) to the 4th of July Mine (~12,000 feet) on several feet of snow (it was possible to make it all the way as of April 16), I thought I would mention two recent adventure runs.

Canones Creek Trail in the Jemez Mountains of New Mexico 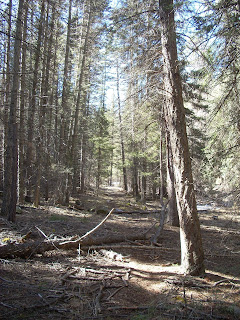 This is one of those classic adventure runs. After driving around on some old dirt forest roads out of Coyote, New Mexico, one finds a beautiful old trail that runs along Canones Creek in the heart of the Jemez Mountains. Although the trail is rarely used now, and involves several exciting river crossings, it offers the trail runner an adventure that takes them back in time.

Originally used by the local Native Americans as a trail for going between the pueblos along the Rio Grande into the high Jemez Mountain calderas for hunting and gathering in the summer, the trail was then "improved" after WWII. Since that time, it has seen little traffic and has slowly begun to revert back to its original state. However, one can still run it for over 8 miles one way, as they cruz along the beautiful Canones Creek.

To find it, drive on Highway 96 towards Coyote, and make a left turn onto Forest Road 100 (heading south). Follow this for around 8 miles until there is a turnoff on your left. This turnoff splits: one going back north and around to a spectacular overlook and the other heading south and down to the creek. Park and run here (unless you have serious 4 x 4 traction). Technically, this is called FR 173 but there are no signs. Run down to the creek, and then you have the option of doing a small 8 mile loop back up and around or crossing the creek and heading down the Canones Creek Trail.

There are lots of wildlife in the area, including wild turkeys, hawks, eagles, and mountain lions. Bring some water, a camera, and head out for a trail running adventure. When you are done, drive the 30 miles to Cuba, New Mexico and grab some excellent New Mexican food. Then head back over towards Jemez and hit up one of the hot springs. 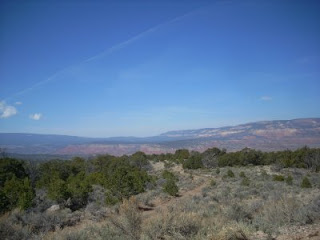 Here is another classic adventure trail run located in a spectacular canyon with 500 foot walls on both sides. The trail, which was originally built by people working on one of the "New Deal" projects set up by President Franklin D. Roosevelt, is now an overgrown jungle of sheer canyon walls, creek crossings, waterfalls, and deep foilage. However, that should not stop anyone, as you can take this trail for over 8 miles until it eventually connects with the Bartlett Trail, eventually reaching the top of Greenhorn Mountain (12,347 feet).

Heading north out of Walsenburg on I-25, take a left onto road 650. Follow this road as it slowly climbs into the gamble oaks at the base of the Wet Mountains. On the map it looks like this road eventually connects with road 271, but that is incorrect. Follow the road all the way until it deadends at a house (with a big dog), and then look due west. There is a small deer trail that leads you to the old trailhead. Taking this trail, one can enter an entirely different ecosystem then the one where they parked, losing track of all time and place. Enjoy, because you are probably the first person on the trail since I ran it.

Both of these trails are perfect examples of adventure trail running. Rediscover some of the lost places in the Rocky Mountains - there are more then you think.