Did a bit of house cleaning the other day and pulled out these old school classics. From an article by Arthur Lydiard from 1971 in "New Views of Speed Training":


"There are very many athletes in the US who train like hell. And when the season starts, they continue to train very hard. I used to train my athletes so they could race. We didn't train to train. When we started to race, we trained very lightly. The two key words are fresh and sharp. You have to be fresh and you have to be sharp is you want to race well."

I see Lydiard's words of advice here just as pertinent then as now. There are plenty of ultra and other runners out there who seem to train way too much, and come into races flat. I know I've been victim of this myself, and with the option to race all year, it is hard to distinguish between training and racing. It also depends on your goals - I know I have several for this summer, some of which can be viewed as "training" runs despite their length and difficulty. Still, the idea of incorporating some form of periodization into your training seems to be the smart way to go - if you don't, you will likely get injured, burnt out, or hit a plateau. 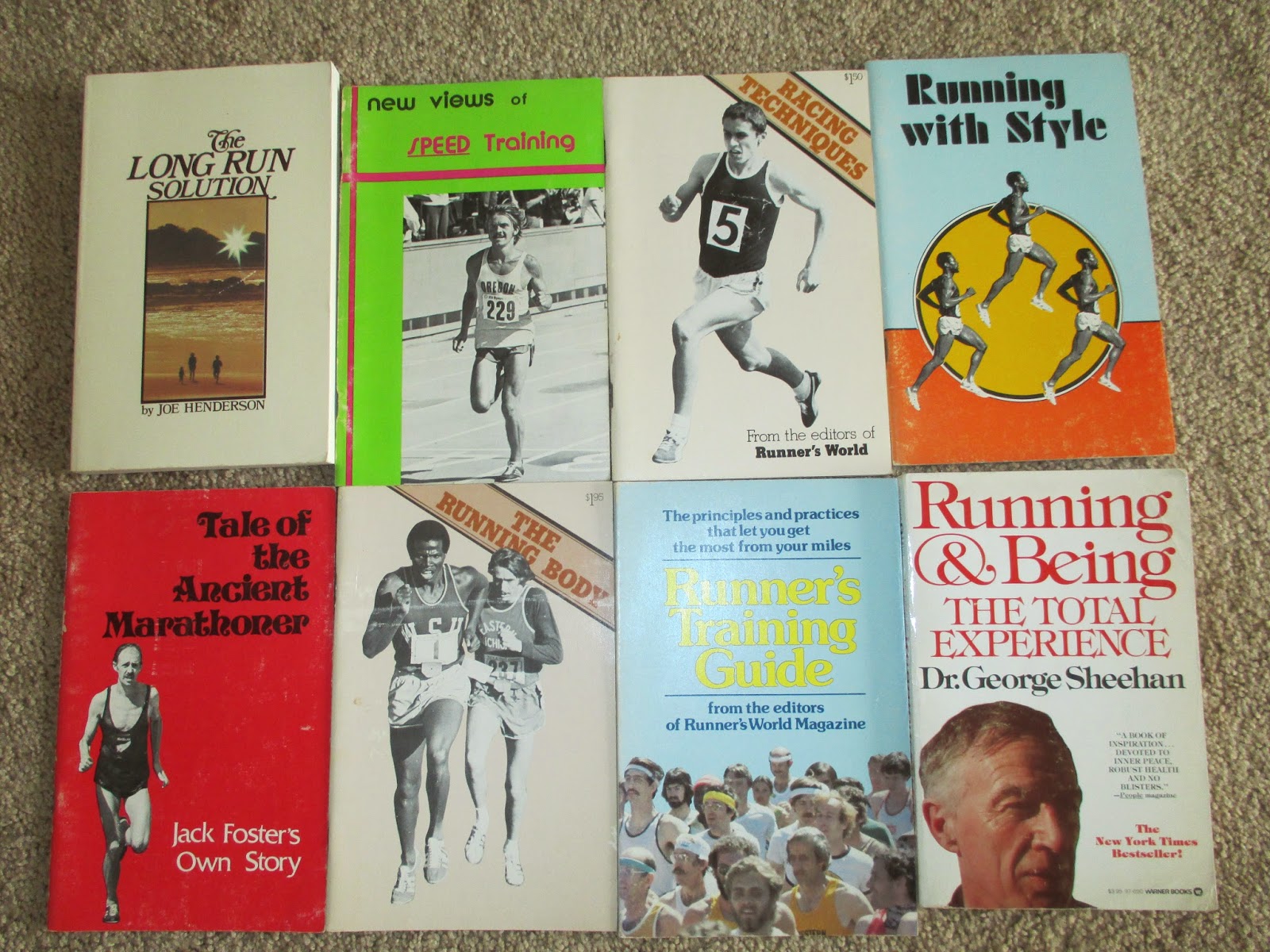 I've been doing track sessions now for 5 weeks, once a week. I do 4x400s and 4x800s with 400 jogs inbetween, as well as some warmups and cool downs. My time for the 400s has improved by 4 seconds and my time for the 800s has improved by 9 seconds. Small, but important gains. I don't have a running background, so I don't have any highschool or college numbers to compare my times to. I'll keep at it as much as I can over the summer and see what happens, but after 3 more sessions I'll switch up the distances to 600s and 1200s to change up the stimulus. Then, after 8 sessions I'll drop back down to the 400s and 800s and hopefully see a good improvement.

The only problem with my little speed work is that I've ramped up the vertical now that summer is approaching for my summer objectives. I've averaged 54,000' of vert per month since November, but am on track this month to hit 75,000' or so. My legs and lungs may be getting stronger, but they are also getting slower, thus the speed work once a week, plus some faster home runs. Some photos from my recent outings. 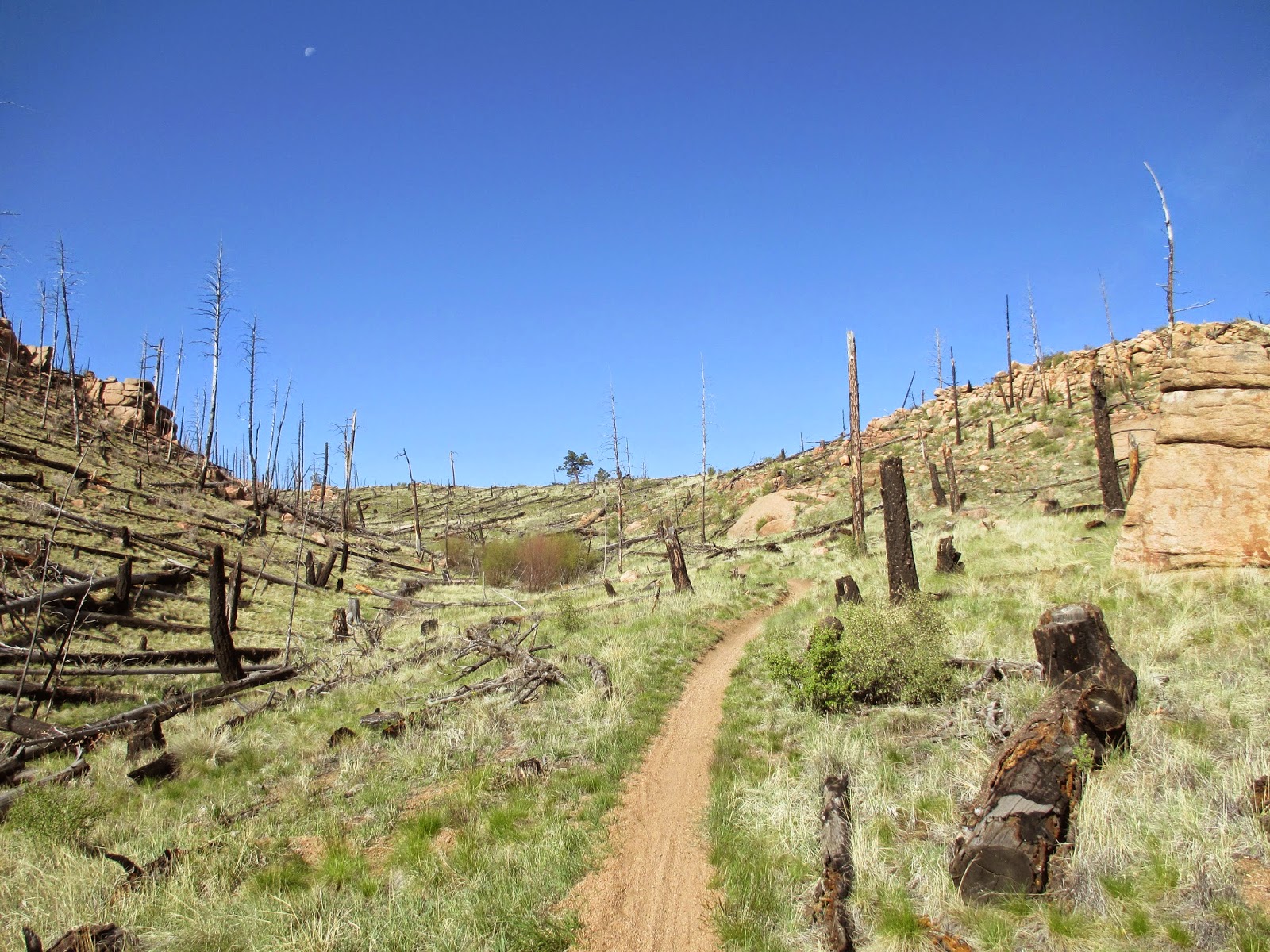 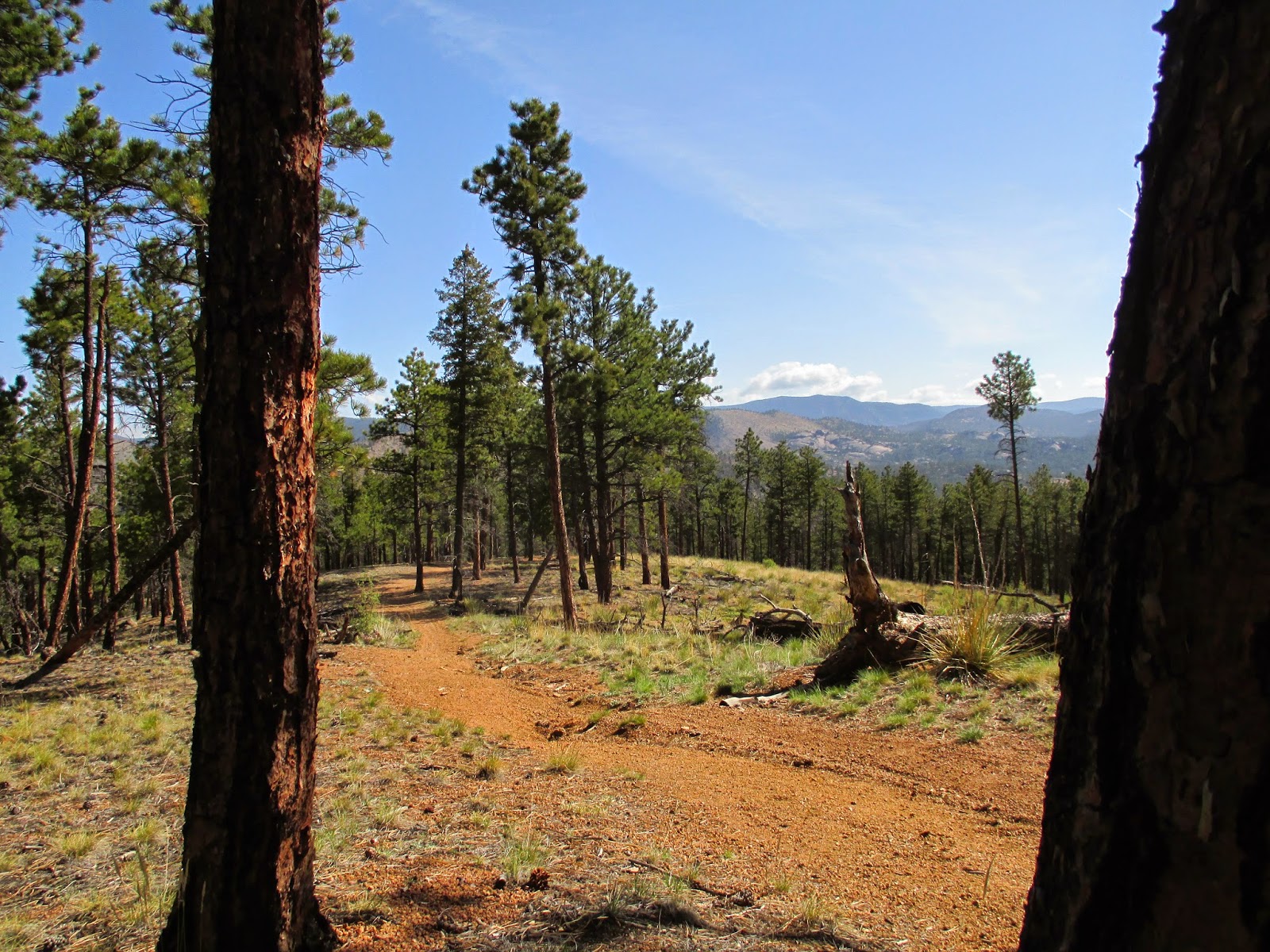 Shots from the trails out of Pine, Colorado - miles and miles of flowy singletrack. 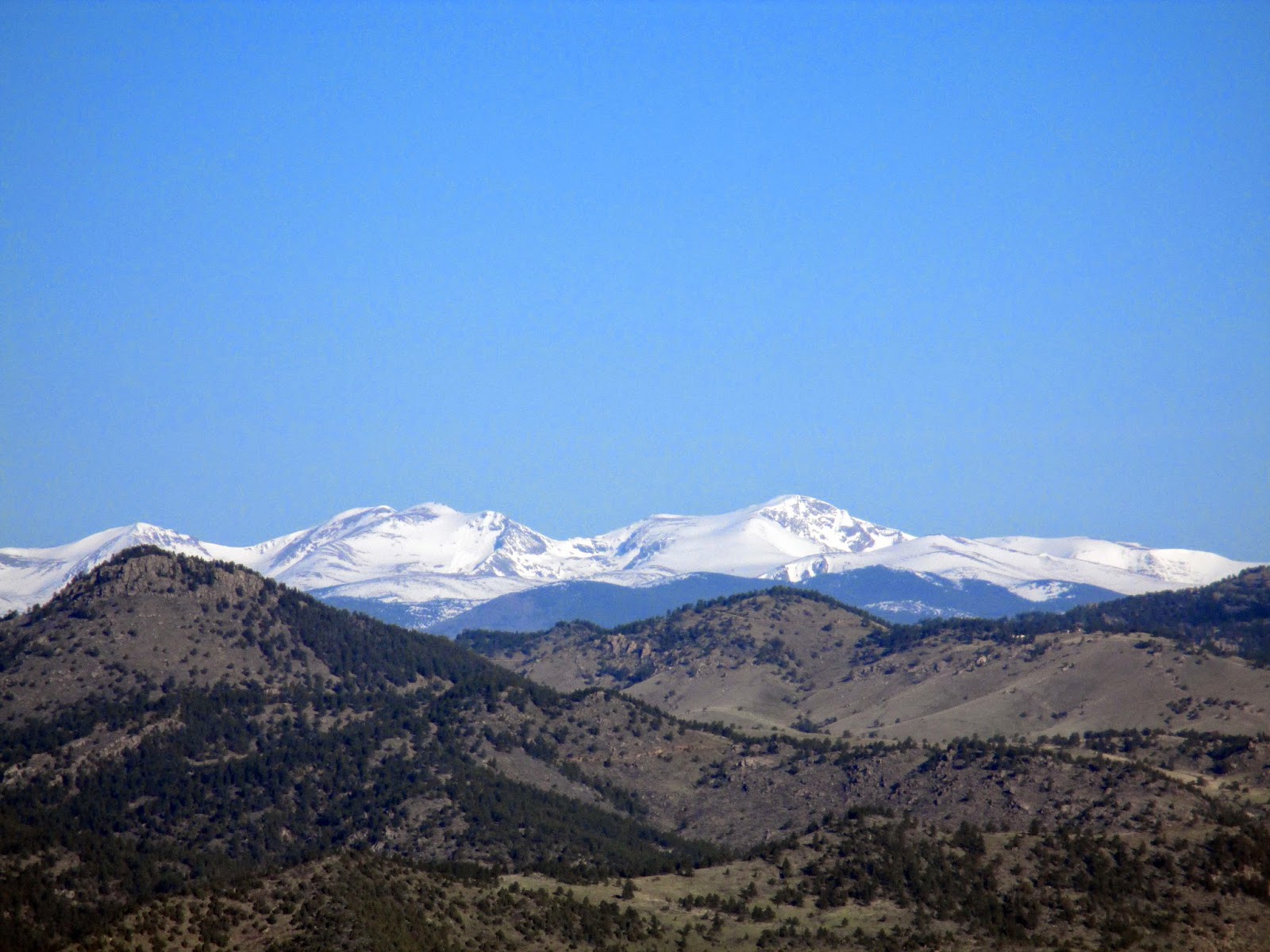 Shot of the Continental Divide from a double Lookout Mountain morning. 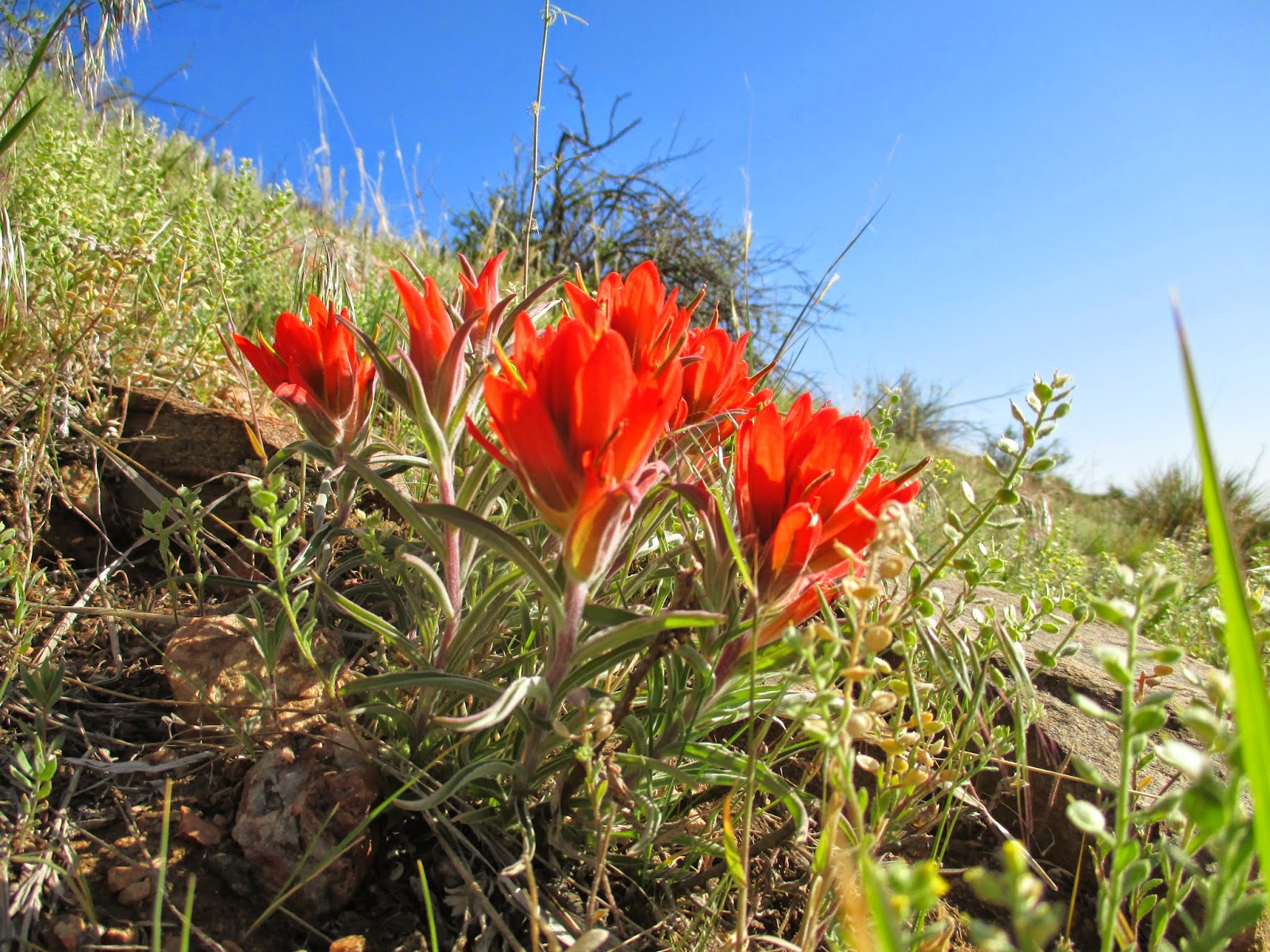 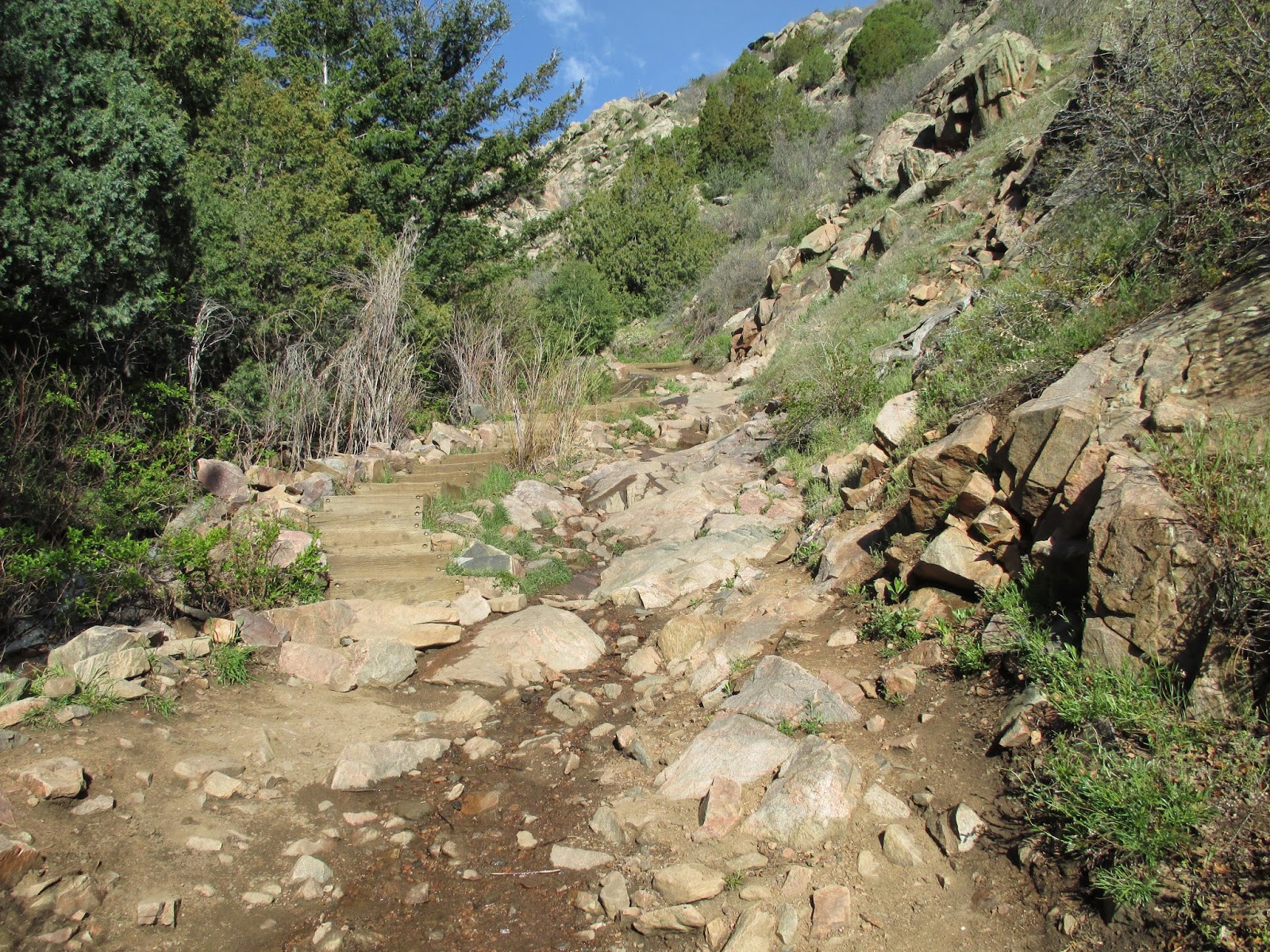 The "Wall" in Deer Creek - I love running the outer perimeter of this park. 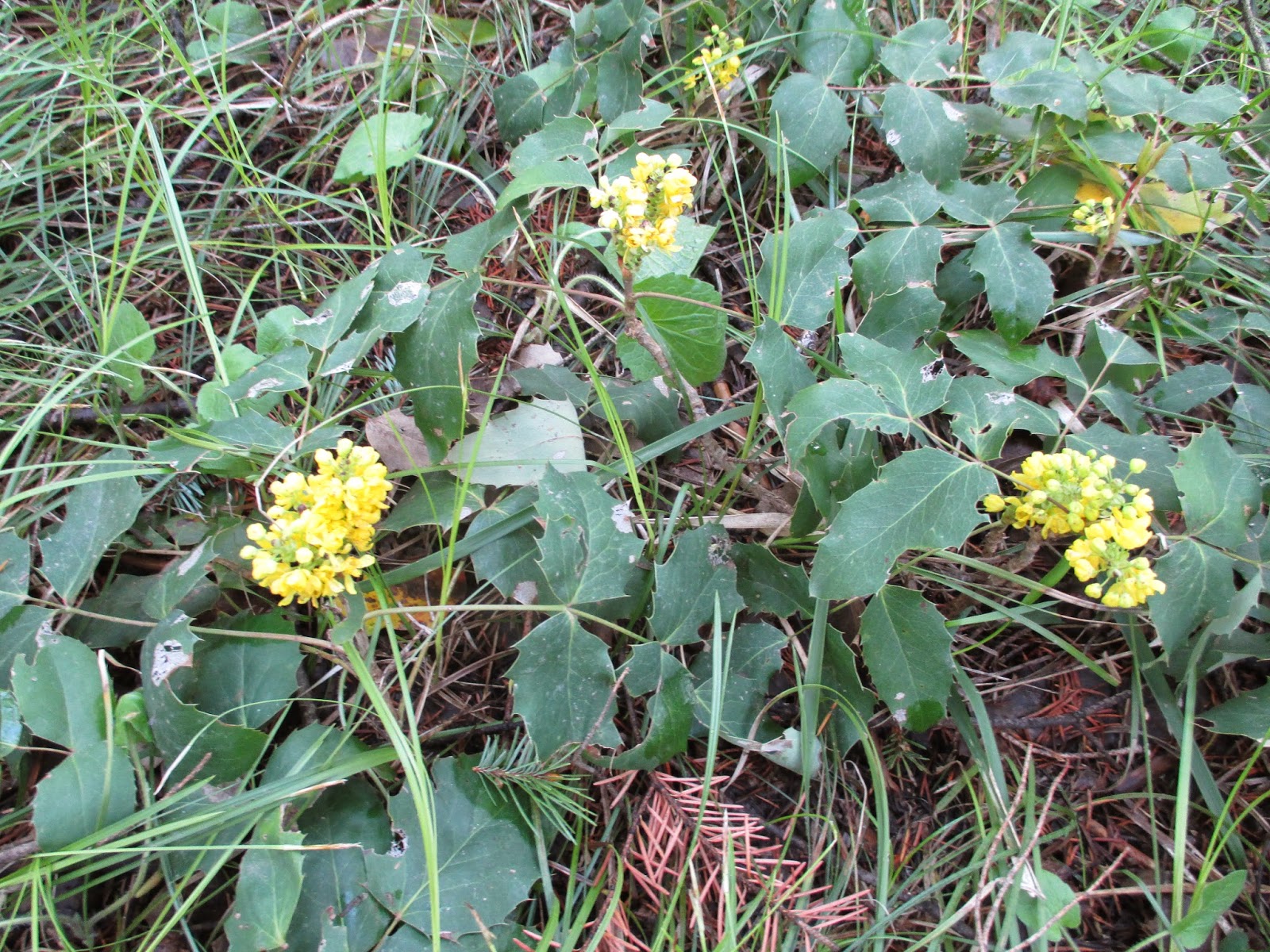 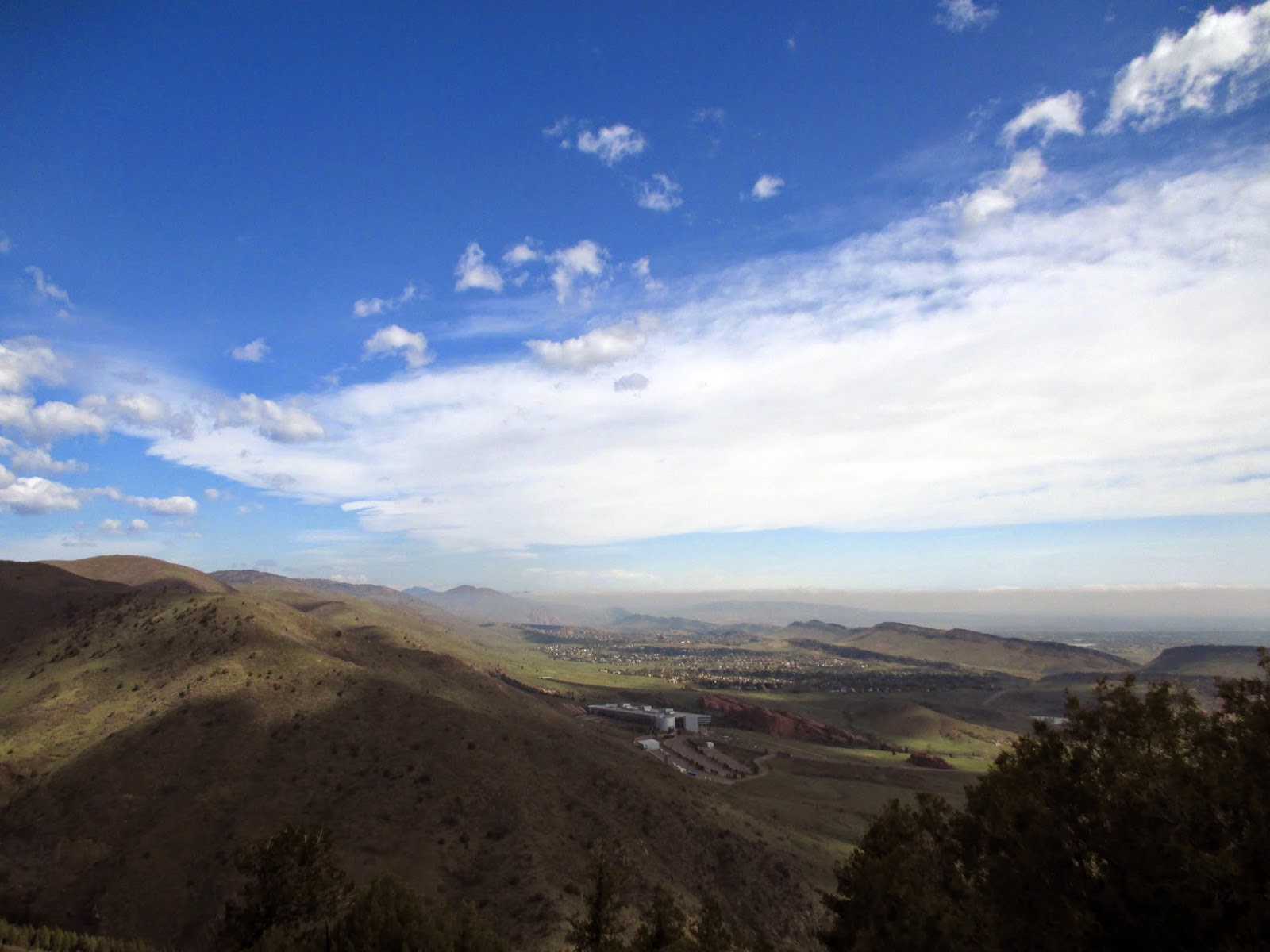 The view from the top of Golden Eagle Peak, aka Bill Couch Mountain.

During my recent run out on some trails in Pine, I also had fun climbing up some slabs off in the woods. Adding slabs or some other scrambling to the run spices things up a bit and is a fun way to change up the rhythm. There are a lot of FAs waiting to be had and plenty of places to explore. I usually climb in this area in the fall when it is not so hot and the ticks are not out, but I had to get some photos for a book I'm working on. 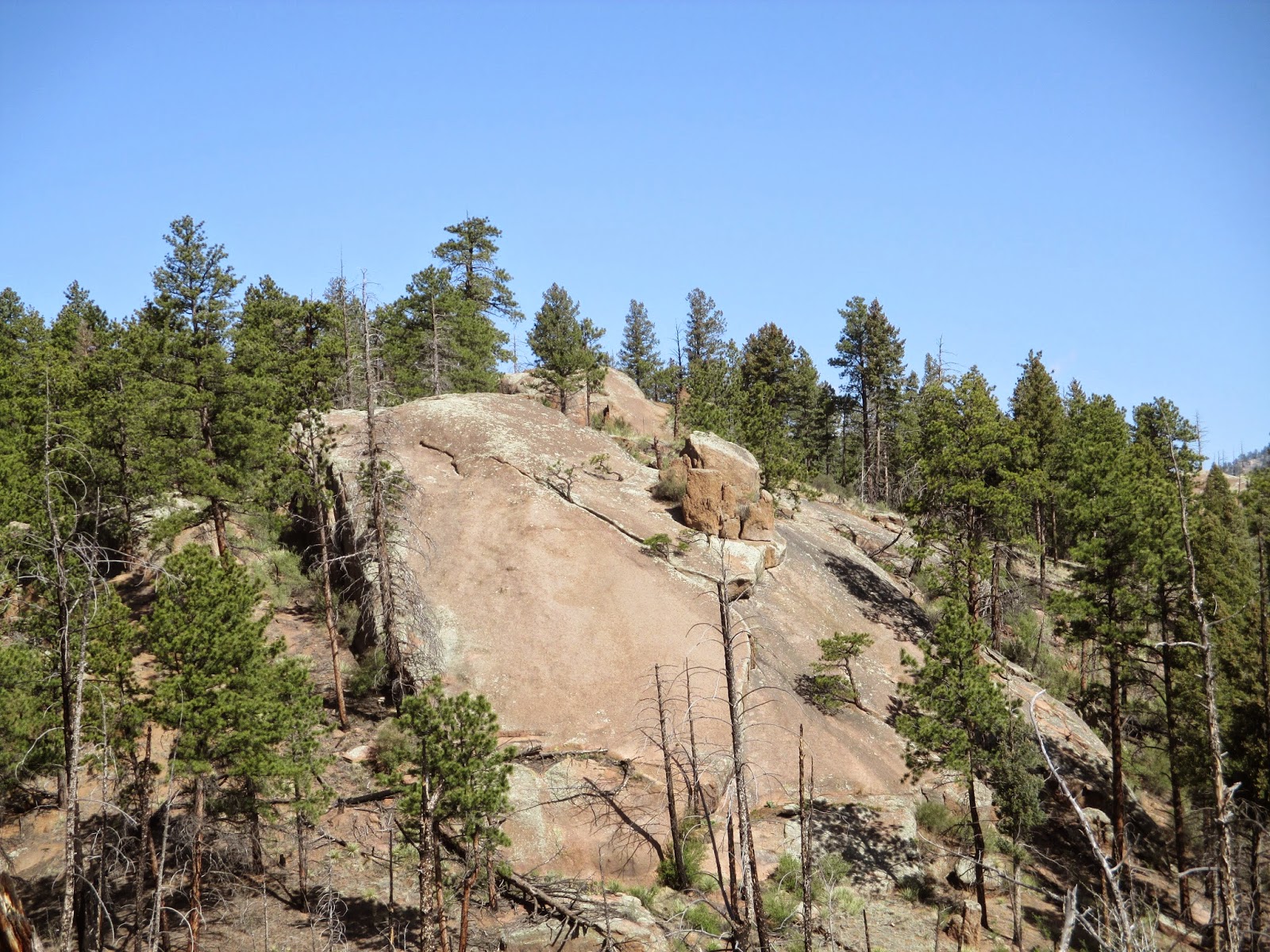 This was a fun slab FA climb, following the crack/seam system - about 120' and class 4/5 climbing 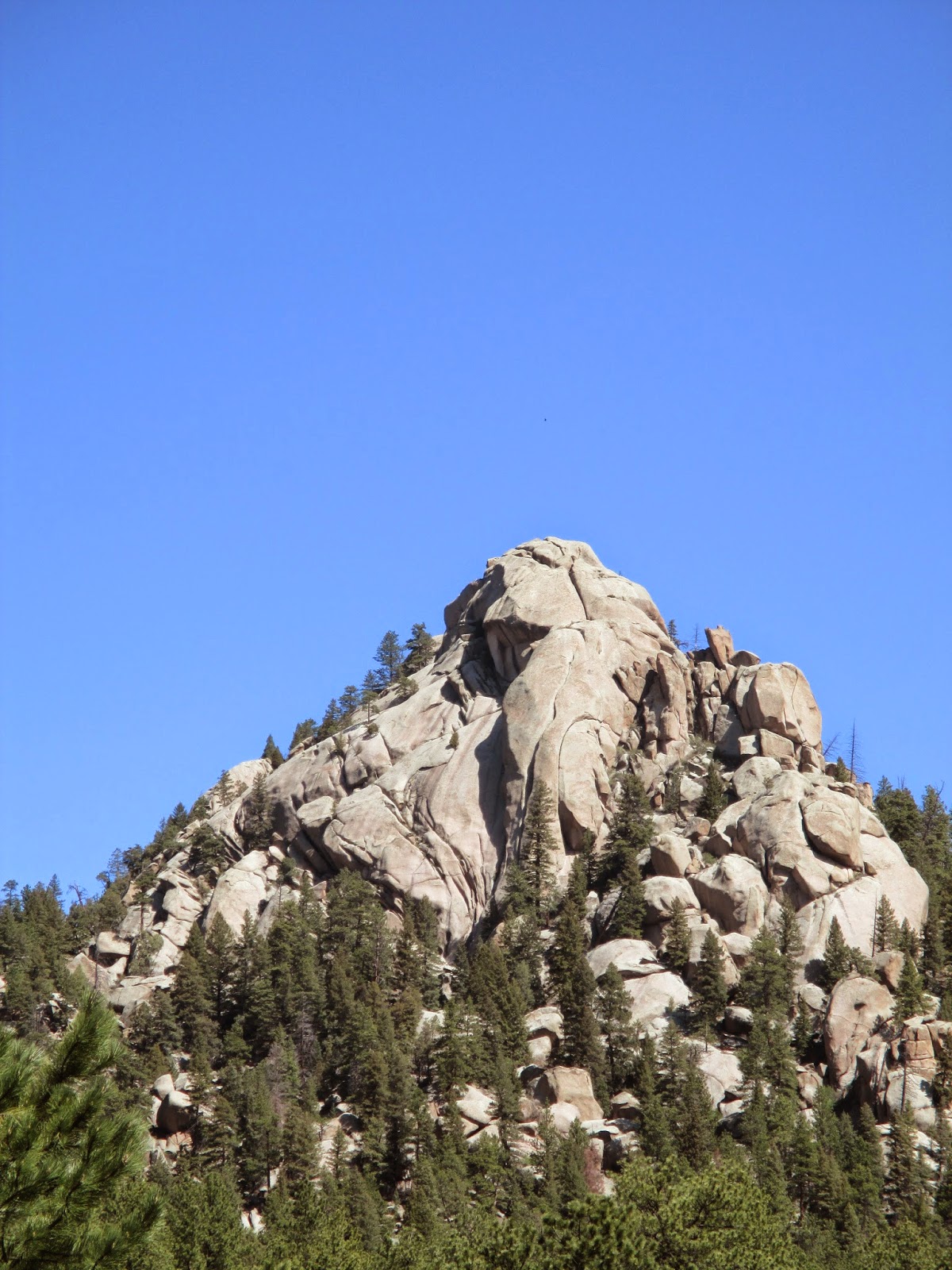 I did some small stuff around this feature, but it is about 3 pitches worth of perfect climbing all waiting for some first ascents.