Ran up Mt. Falcon this morning, taking photos as I went. I really enjoy this run, as I've noted before, simply because you get in some decent vert (~2,000+ depending on the loop) and most of it is more "runnable" than the hill climbs out of Boulder. 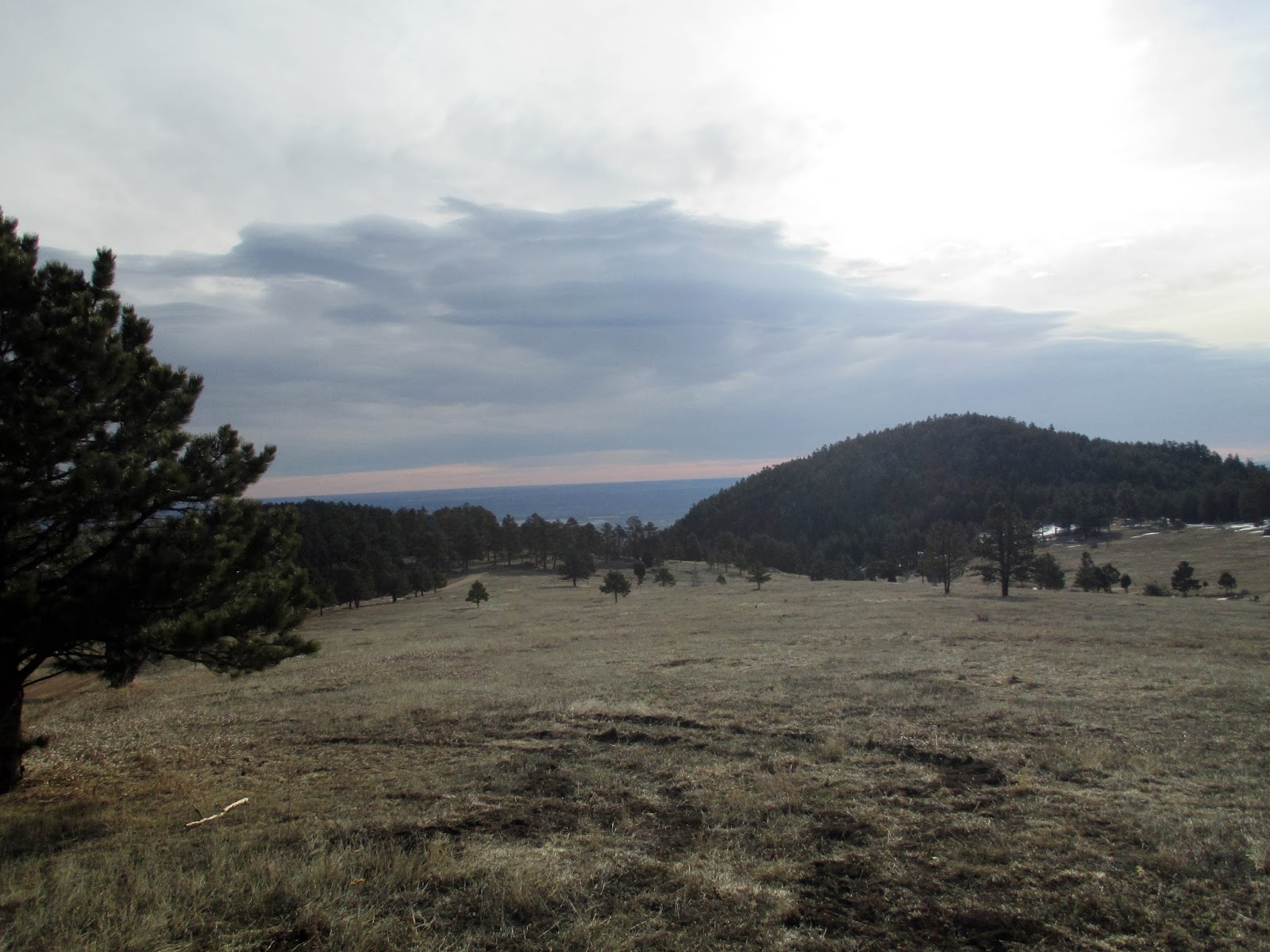 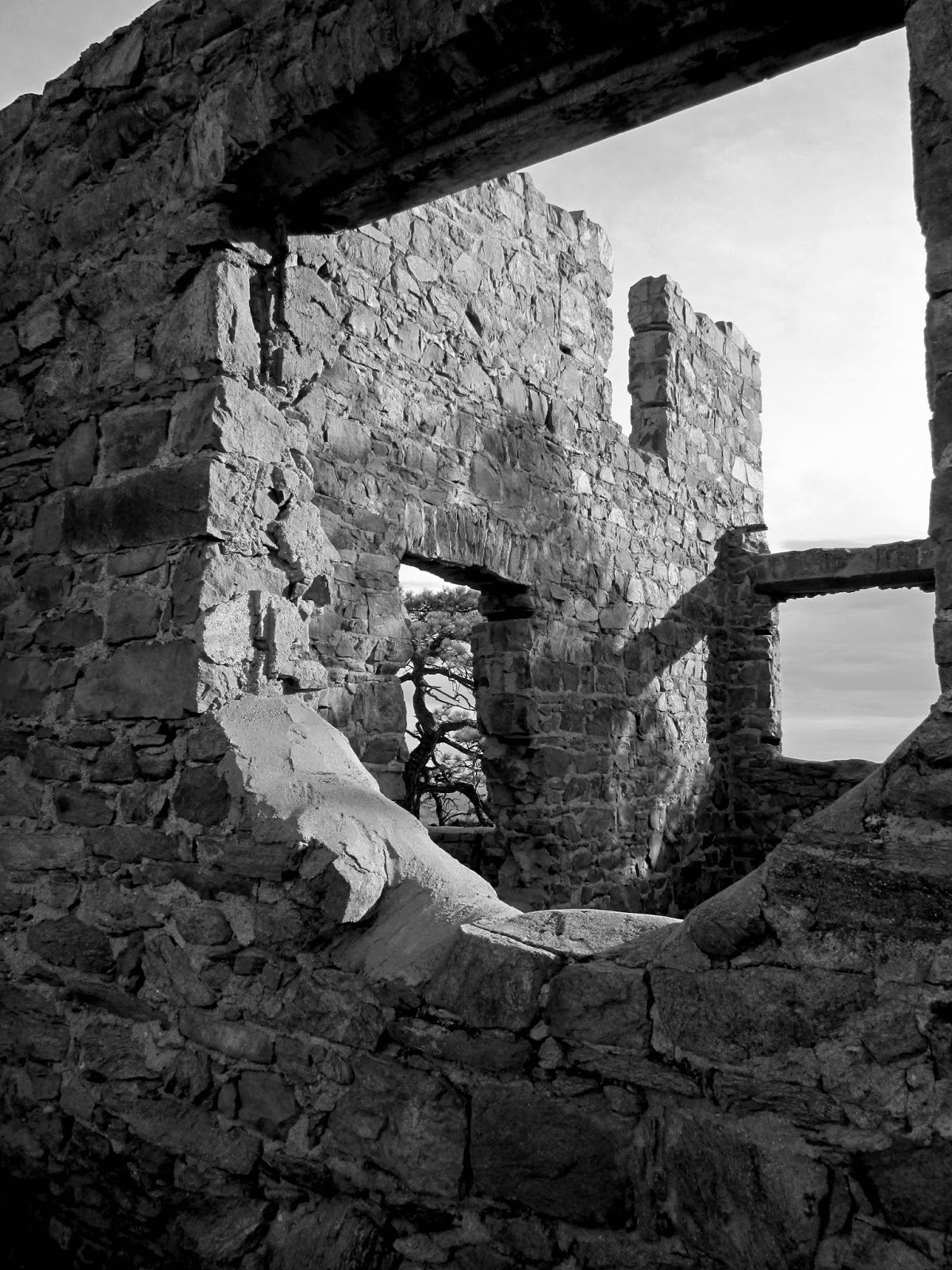 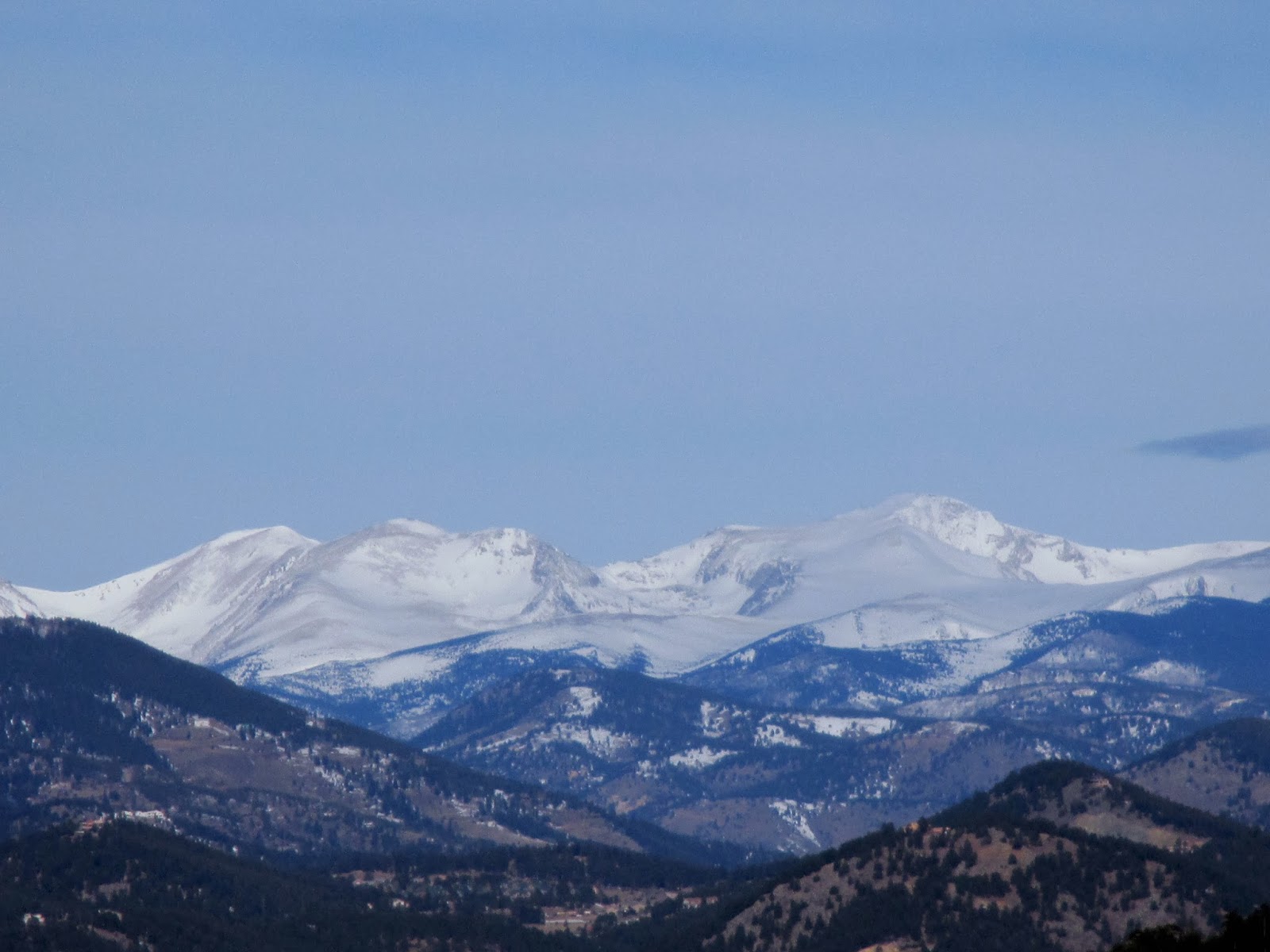 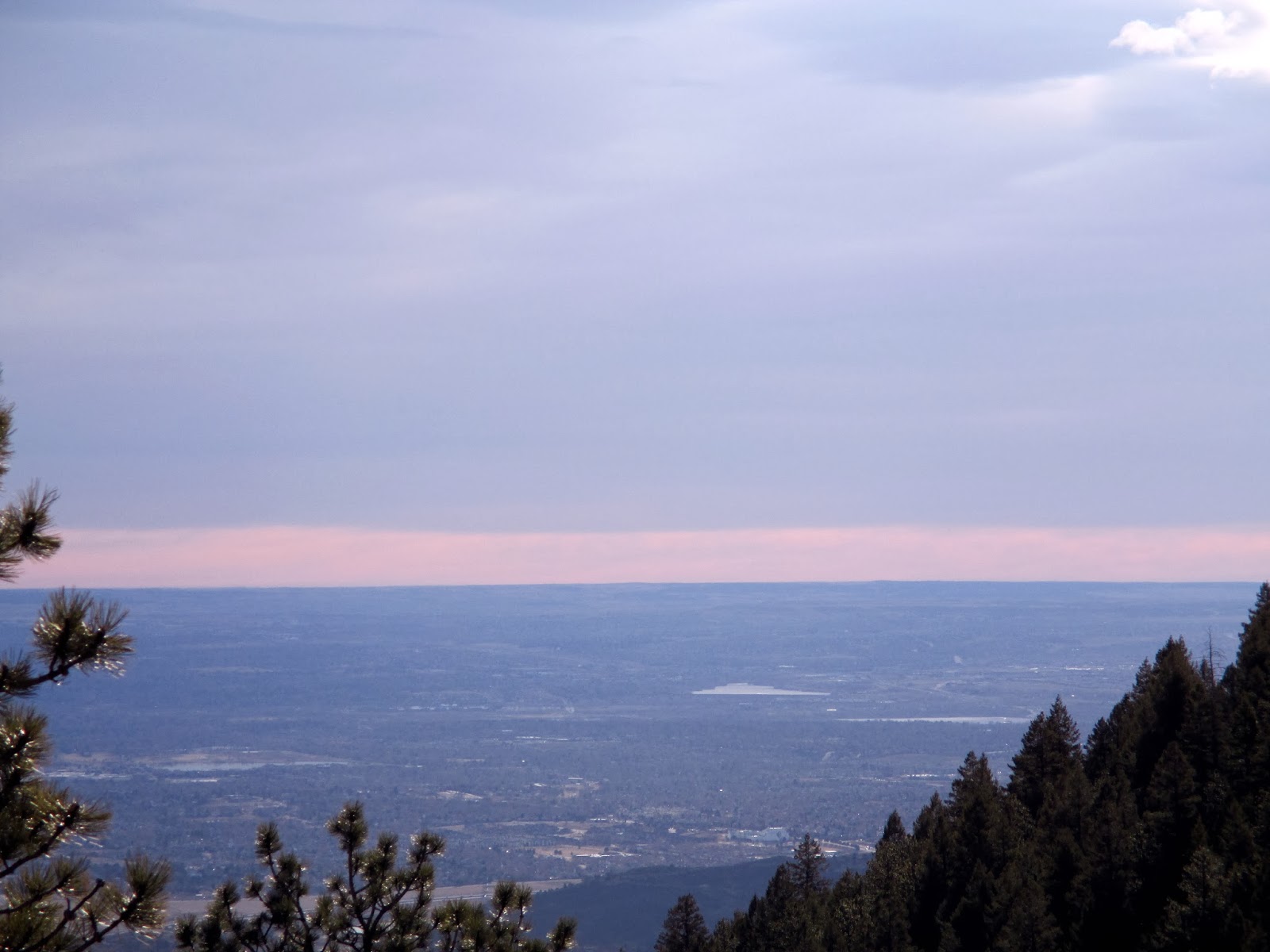 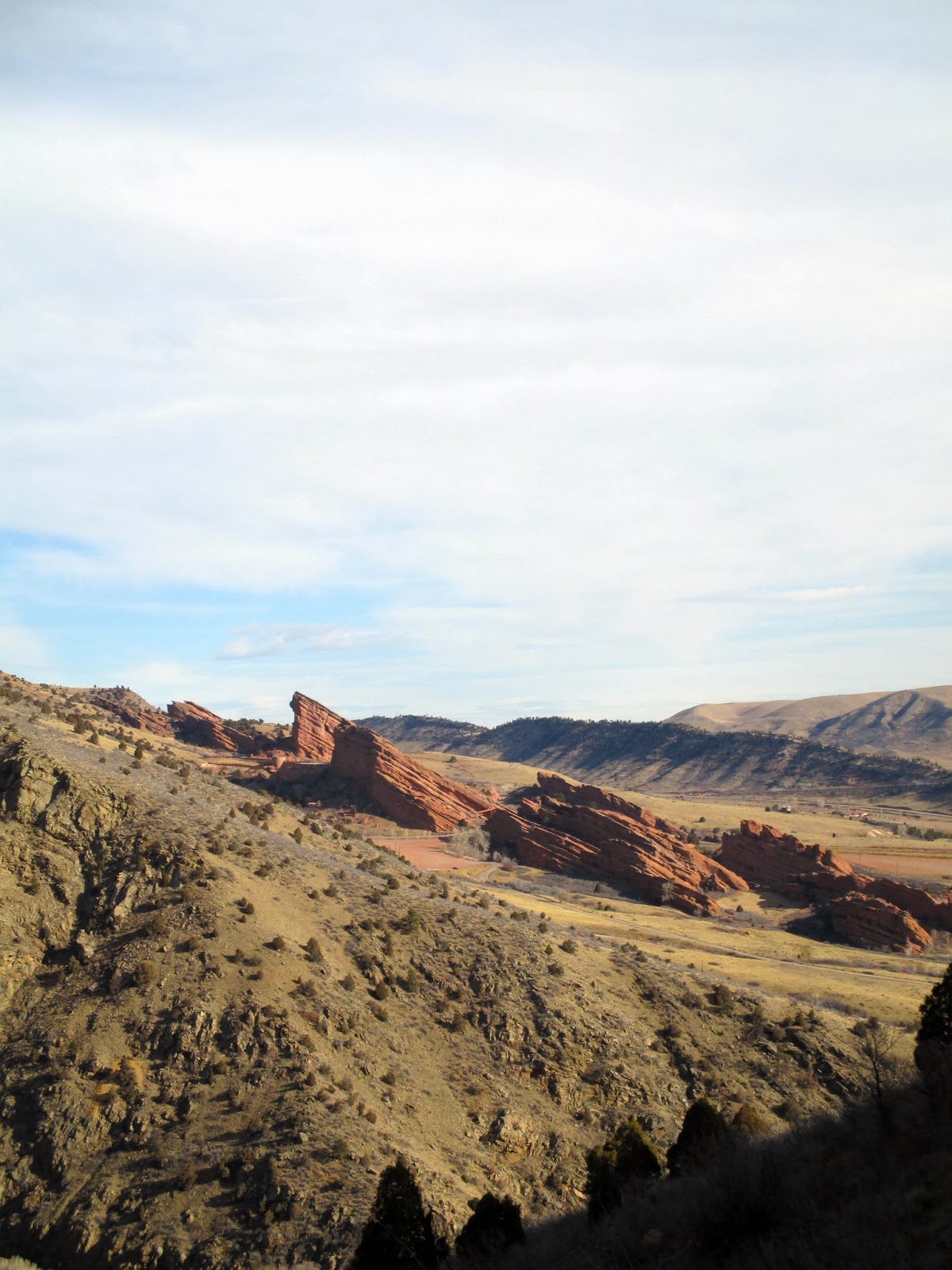 I thought I would give a critical review of the Brooks Cascadia 8 shoes as they are a pair that I have been running in for a bit, and since I just picked up another pair, I would give a review after some solid testing. Most, if not all shoe reviews, seem to me like they are done after only one or two runs. The review usually just highlights the new stuff in the shoe, often verbatim from promo material supplied by the shoe company. That is great when a new model comes out and one is thinking about picking it up, but it does little to tell the reader how the shoe will perform over time. So I thought it might be informative to look at how a shoe did after it's running life is (nearly) over.

I got the pair of Cascadia 8s in November, so my review will only be for Nov., Dec., Jan., and Feb. It is important to note that this review focuses on the shoes performance over the winter - plenty of dirt, but lots and lots of snow and ice as well. This I believe has resulted in the sole and the upper lasting longer then if I was reviewing the same shoe for the summer months when they would see significantly more dirt and rocks. Here are the two key stats:

Here are two photos of the shoes as of March 4. 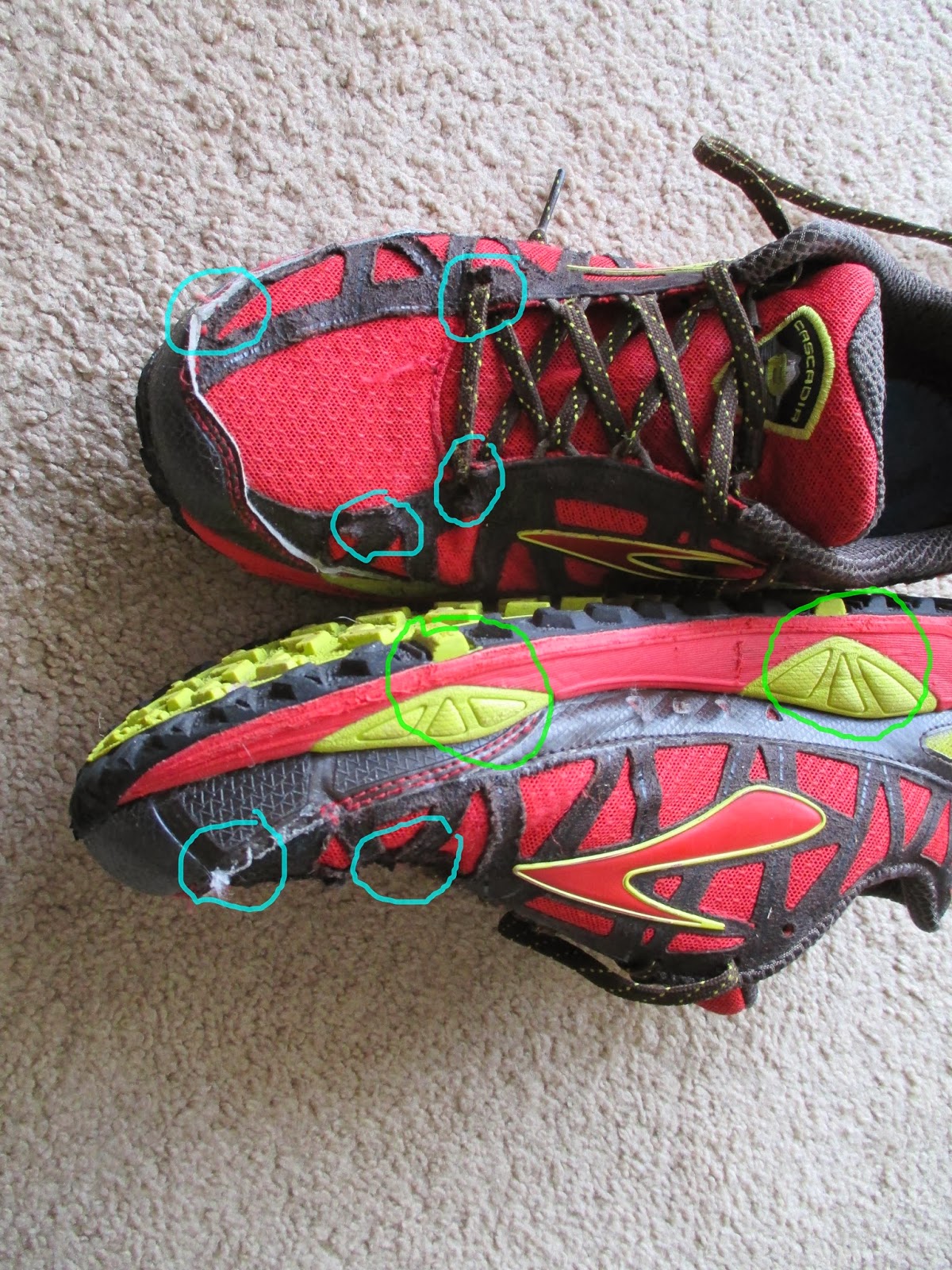 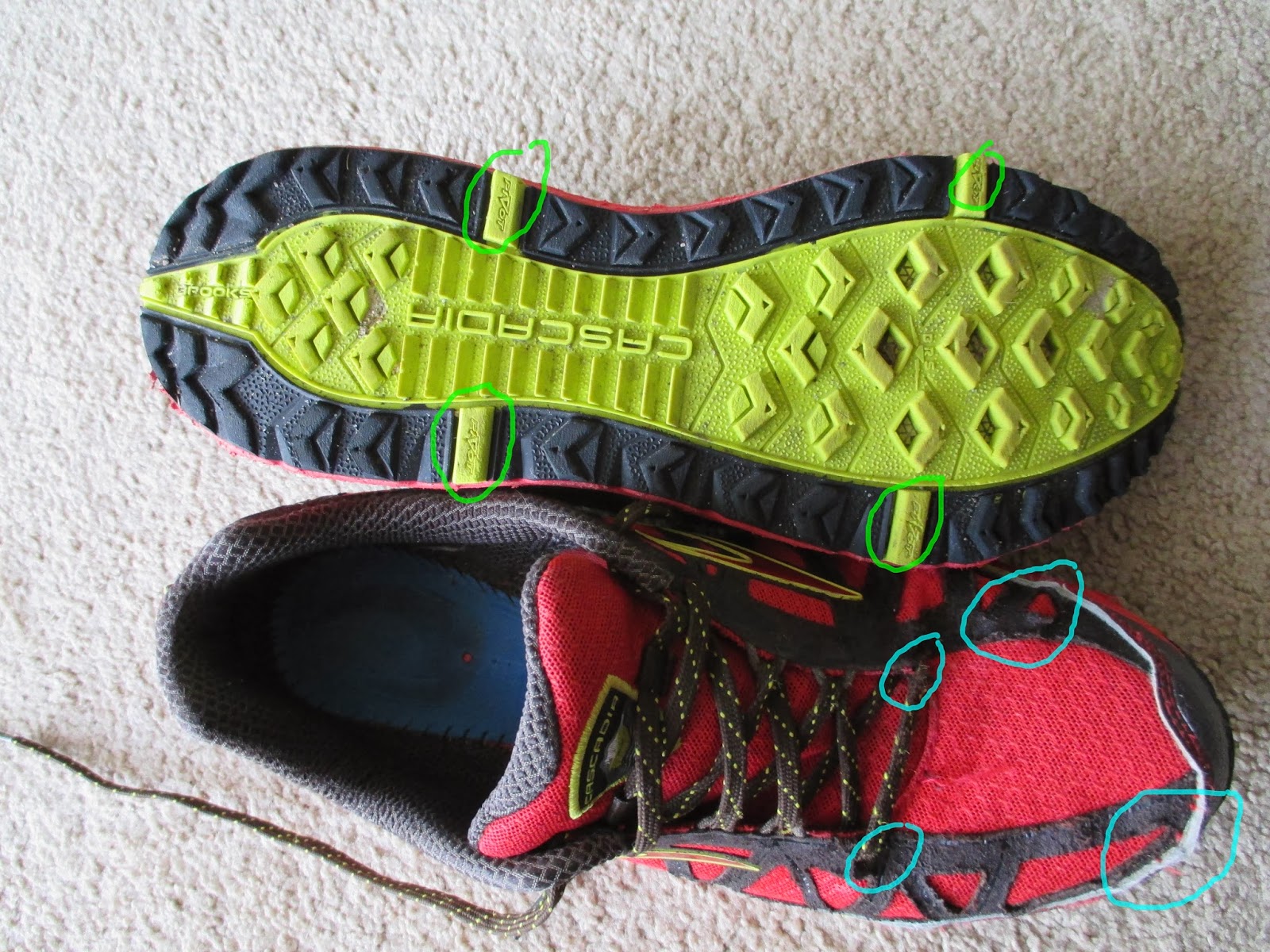 As you can see, the color and overall look of the shoe has held up well. They are clean and bright because the snow washes them off every time I run; again, the review would be different if I was considering their summer performance. The only thing I've done to modify the shoe is to spray about 5 layers of NikWax on them, which adds a protective seal and prevents wind and snow from passing through the mesh uppers. The blue circles in both photos indicate where critical wear points developed. The way the suede and mesh uppers are sown results in the seam splitting near the outside and inside of the toes. On this pair, I had to use shoe goo to re-glue this seam twice, as it easily snags on anything and tears open. Ideally Brooks would move this seam in version 9 or 10 just a bit up or down so that it does not tear as easily. Another critical wear point is the bottom lace brackets (indicated with blue circles). This is another area that sees high rubbing/friction from regular use, and can easily wear and break. I reinforced mine with a bit of glue, simply because once they tear, there is no way to tie the shoe since these lace brackets are not holes in the suede/mesh fabric, but sown on. The final critical wear point is the suede on the sides of the toe box back to about mid-foot. The suede is sown on to the mesh to help wrap and keep the foot snug, and it does a really good job, but after some serious use, it begins to fray and come apart.

These are really minor overall issues, as any shoe after serious use is going to break down. However, some shoes fare better then others, and simple adjustments could enhance the life of the shoe greatly. As can be seen, the soles of the shoes held up amazingly well. The lugs on the Cascadia 8s are great, providing excellent traction in almost any conditions - ice, packed snow, mud, dirt, talus, etc. They use a hard rubber similar to Vibram, which does not wear down easily. Of course, it is important to remember that this is what the sole looks like after a winter of use, not a summer of use, which I would imagine would cause much more significant wear.

The midsole, made up of Brooks BioMogo DNA has held up really well. There is some compression if you look closely, but the shoes do not feel flat yet. BioMogo DNA is a combination of Brooks BioMogo midsole compound and it's DNA, which is a non-Newtonian fluid or a fluid whose viscosity is dependent on the amount of stress put on it. This means that the shoe feels both "soft" and "hard" at the same time. If you are running along, the shoe will feel like it has just the right amount of cushioning, but when you start pounding the downhills, because of the added stress put on the midsole, it "stiffens" and protects your feet from the impacts. The yellow bars and triangles circled in green are their "posts" which are supposed to act as independent pivot points that help in balancing the foot and adapting to varying terrain. I don't know exactly how they work, but they are made of a harder EVA rubber.

Obviously I'm really happy with these shoes since I got another pair (I didn't pick up the 9s because they seem to run a bit smaller then the 8s and they got rid of the suede for a glued on fabric which I feel will fray and peel off pretty easy after serious use). My only complaints, as noted above, are the locations of some of the seams which promote tearing, as well as the lace bracket system used. The outsole and lug design are perfect - much better than I've found on many other shoes. I can't say whether the asymmetrical lacing systems is good or bad - I didn't notice either way, but they went back to a straight lacing system for the Cascadia 9s. I can see putting in another ~200 miles on this pair before they are truly dead, which would give me 800+ miles on a pair of shoes. Not bad at all.