The season is off to a slow start here in the States. Although Colorado has A-Basin and Loveland open (and rumors that Keystone is opening next week), why not enjoy some photos and stories from our friends down south.

Down in Chile, our friend at Wagner Custom Skis and Snowboards just did a very nice descent of the Lanin Volcano.

Here is a preview... 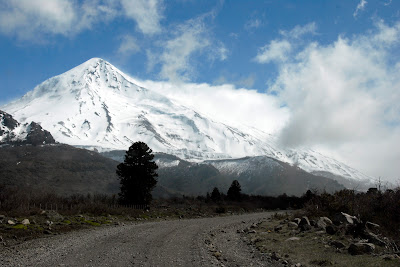 An unsuccessful attempt in 2001, illusive yet again in 2006, and topping the list during the years in between. At 3776 meters Volcan Lanin was consuming my thoughts. This time around, in the beginning of October 2008, I would go for it again. As the chairs stopped spinning in Las Lenas and after spending some quality ski time with my brother, it was time to return to the Patagonia region with only a week remaining during a month long ski adventure. Traveling from Las Lenas through the night to the Argentine resort town of San Martin de los Andes I was inspired again with a glimpse of the volcano from the bus. Arriving in San Martin, only two hours drive from the base of Lanin, the weather waiting game began. 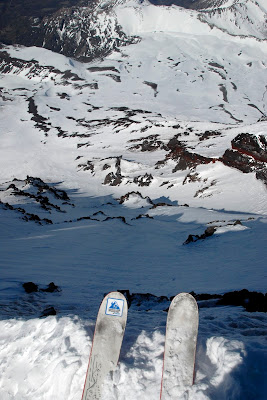 Staying in the hostel Puma, it was not long before I found some like-minded individuals keen on an attempt of the volcano. Spending only a few rainy, windy days around the region we made the most of it seeking out hot springs, I was happy for the rest after the previous week spent in Lenas. Eventually we were presented with a small yet promising window in the weather. It would happen the day before I absolutely had to catch a bus back to Buenos Aires in order to catch a flight back to the states.

The true adventure began when I loaded up ‘radio flyer’, a small red Suzuki samurai, with Nick Frazee, an acquaintance from Las Lenas, and Drew Friedmann, telemark skier and proud car owner from Chicago. Cramming our gear and ourselves into the rig we began driving toward the volcano. We didn’t make it very far before the sound of metal on metal and smell of burning brakes had us a bit worried. Turns out we had blown a wheel bearing on ‘radio flyer’. Two or Three hours of drinking mate with the mechanic, modifying bearing components and disconnecting the rear breaks, and we were on the road again.